Most Fun I've Had Reading All Year 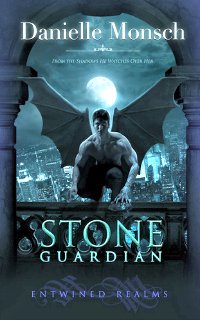 Disclosure:   An ARC of this book was provided to me by Romantic Geek Publishing via NetGalley.

Twenty-six years ago, her life began...and her world ended.

Larissa Miller grew up in the years following the Great Collision, the day the human realm and the realm of magic slammed into each other and merged. Sheltered by her single father and four elder brothers, all of them cops, she's lived a pretty idyllic life in the human-only city, the dangerous reality of orcs, necromancers, werewolves, and any of the sundry deadly creatures who now share her world a distant concern.

Of course, distant concerns can get a whole lot closer pretty damn fast when you're attacked by a group of zombies, creatures of nightmare who shouldn't even be able to get past the magical wards that protect the city. Larissa's life doesn't seem quite so idyllic after that. She just doesn't know why. Neither why she is being targeted by the baddest of the baddies nor why a gargoyle came to her rescue. But she's going to find out.

For three months Terak has clung to the shadows, watching the human woman whose fate is linked to that of his clan, according to one very inscrutable Oracle. As clan leader, it is his responsibility to protect her. He just didn't know what he was protecting her from until he caught the scent of death and decay on the breeze.

Even after the zombie rescue Terak doesn't know how Larissa's safety will impact his clan but it no longer matters. Given the depth and breadth of the rage that courses through him at the mere thought that anyone would dare attack what was his, he has more than a sneaking suspicion that the little human has become very important to him. And with a necromancer after her, as being set upon by zombies would indicate, his little human's problems are just beginning.

He will end them for her or die trying. He is gargoyle. It's what he does.

I can't even begin to adequately express just how much I loved this book. Reading it was the most fun (with a book) that I've had all year. I loved it. I loved the world, loved the story, loved the characters. It was a trifecta of awesomeness!

There was so much great storytelling going on in this book. Everything from the prologue, which gutted me, to the conclusion, which tantalized me, was a thorough, intriguing, thrilling, emotional journey that captivated me and held me in thrall until the end. Not only were the primary plot threads and story elements woven together well and fully developed, but there was a delicious subtlety to elements which were merely introduced. At times it was maddening, but in the very best, "Ohhh, I want more of them/that NOW!" way that left me ravenous for the continuation of the series.

Without doubt, Monsch has a gift for creating exactly the sort of varied, sophisticated narrative and three dimensional plot that I most enjoy. To be honest, though, that gift pales in comparison to her sheer, unmitigated genius for character creation.

Larissa is a solid heroine, and while she isn't my preferred type for the genre (she's a little too innocent for that), I loved her personality and practical attitude. She gets a lot shoved at her at once, and I couldn't help but admire the way she soldiers through some fairly massive paradigm shifts, adapting as she goes. Her growth and evolution throughout the story was appealing, and I was pleased with the ease of her acceptance of Terak.

And positively delighted by his consternation over it.

Terak was a whole other massive dose of fantastic. First: gargoyle. Yay! I think they're sadly underutilized in the genre and I'm a total sucker for them. Second, Terak is my absolute favorite type of romantic hero. He's a big, bad, and totally kick-ass warrior, but when it comes to Larissa, he's befuddled by the strength of his instinctive reaction to her, even as he revels in it. And his confused pleasure every time she does or says something that displays her trust and comfort level with him was so damn endearing. Loved him.

That said, I have to be honest. Though wonderful and fully entertaining, neither Larissa nor Terak, nor their romance, were what pushed this book over the edge of five star reads into that ultra-small group of books I consider favorites. That honor lies exclusively with the few members of the Guild we meet in this book. Secondary characters Fallon and Laire stole every single scene they were in, exploding across the page and into the main characters' lives with a vitality and multihued vibrancy that is absolutely unmatched in recent memory.

I loved Larissa and Tarek, but Fallon and Laire rocked my world. I'm dying to spend more time with them and find out all those devious, delicious little details about their lives and acquaintances, details that were merely hinted at in this book. They were truly spectacular.

I'm not saying there weren't any critical elements. There were one or two things that didn't work for me nearly as well as the rest, or things that I would have liked to see evolve a bit differently. Most notably was a moment late in the book where Larissa hops on the Stupid Train for a short jaunt to Hapless-Victimtown despite spending every preceding moment in the book being exceedingly cautious and pragmatic. And I think I pulled an eye muscle with the severity of the eye roll that her moment of doubt about Tarek's motives caused. That was pretty heavy-handed and awkward.

All of that is usually exactly the sort of stuff that dims my enthusiasm for a read, but it just didn't in this case. There was way too much awesome going on before and after it all. The minor quibbles I had didn't do much more than flash on my radar before being overshadowed by my overwhelming pleasure in everything else. So very much pleasure, so much reading entertainment, so much fun. Absolutely the best time I've had while reading in a very long time. I'm so incredibly bummed that the next book won't be around until 2014. So long to wait!!

"Before Laire comes up with a reason why we should start removing clothes to prove some theory, I got a question." Fallon said. "Can we teleport out of here if this turns ugly?"

"Nope, our only hope will be for you to swing your sword, Wulver to fang out, and me to set everything on fire... Ooh! Liquor," And Laire turned way, walking to the bar.

"Laire, get back here! You do not drink before we meet with our mortal enemy."

"I don't think you belong here."

Laire plopped down on the barstool. "And I'm supposed to care about the opinion of someone who drools over corpses? Your implants have more sense than you do."

"Please tell me you recognize the most in-demand mercenary in the business?"

"Why, did we have a drunken one-night stand you forgot to tell me about?"

"Who do they think I am, sending a pansy-ass like that against me?"

Fallon patted Laire's shoulder, a there-there motion. "I don't think they knew we'd be waiting when they prepared this trap. But for you, we'll send his head back to them with a note to not insult you again. Does that make you feel better?"

Return from Stone Guardian to One Good Book Home