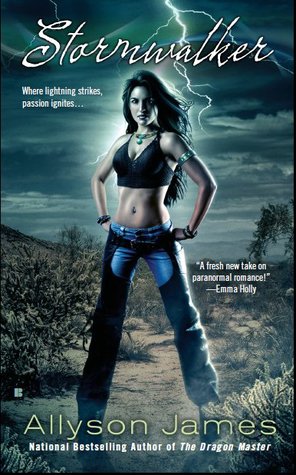 Janet Begay's heritage is seeped in the Native American culture. She's a Stormwalker, able to channel and use the elements and energies of storms. Though she's been estranged from her family for the past several years, she's returned to the southwest after so long away to deal with the other, much less pleasant side of her lineage...and all its hazardous implications.

Janet has returned to her own back yard to prevent her demonic mother from slipping the bonds of her prison and stop the never-ending attempts to free herself from Beneath. Until Janet's sure (or has the first clue) how to do that exactly, she's working a missing persons case and renovating an abandoned hotel. But her mother isn't content to let her daughter be so close without sending her deadly minions from Beneath to retrieve her. And those minions aren't too concerned with the condition Janet's in while they do it.

The assists from her intense, sexy, overprotective, and secretive not-so-ex-boyfriend Mick and the enigmatic input of the licentious god Coyote may keep Janet alive and out of jail, but ultimately the insidious seduction of the power of Mommy Dearest may rip Janet, then the world, apart.

Allyson James (who also writes as Jennifer Ashley) has kicked off this series with a likable heroine with strong ties to her culture and a sexy hero (a large drink of sizzling goodness coated in yum, that one) who would do just about anything for her...except tell her about himself. She's set them up with a plot that provided some interesting conflicts and adding a cast of...not totally likable...secondary characters. The premise of the book is sound: Janet's demon mother possessed a human woman and seduced her Native American father in the hopes of creating a child capable of freeing her from Beneath, a demon realm loosely connected to our own through magical vortexes. She succeeded and now is trying to get Janet into a position to free her. To add depth there are the additional plot threads of the missing woman and the renovations to the hotel Janet plans on running.

As the backbone of the book, those threads provided a strong starting point. My problems with the book started to arise with how those threads were woven together. The potential for a rich, vibrant, and unique world was there, but the story didn't quite go all the way to adequately explain and build that world to give me more than a superficial understanding of Janet's reality or the rules of magic that exist there. I enjoyed the glimpses of Native American influence and the trip back to Janet's childhood home, but I wish there had been significantly more with her grandmother. Her character tread the line of stereotype, but I enjoyed her. Yet while Janet went back home to face her past, and face the family she abandoned, the book never really delved beneath the surface of all that history to connect me to Janet as a character and allow me to see what put her on her present path. Instead readers are told things almost in summation during scenes with her father and her grandmother, before the arc of the plot moved along to something else.

And speaking of the plot, I felt it lacked the sort of increasing tension and conflict development of my favorite urban fantasy novels, and instead seemed to almost meander from point to point. Despite the clear and present threats and several words of warning of impending doom, there were few instances where I felt the characters had any real sense of urgency - whether it was dealing with Janet's mother's antics, investigating the missing person, or dealing with the mystery of the body in the hotel. It's easy to instill urgency in characters who are desperately trying to survive Nightwalker and Skinwalker attacks, but when something wasn't directly threatening them, Janet and Mick (when he wasn't disappearing) seemed to operate more on Island Time than anything else. On a side note, I'm no more clear than county sheriff Nash Jones was on what made Janet qualified to find a missing person. That particular plot thread seemed very weakly connected to the characters and the overall arc. I could have done without it.

About the sheriff...the antipathy between he and Janet wasn't really supported or explained by the events in the book, so he came off as a total jackass, but his backstory was very interesting and his character one of my favorites in the book. There was just something about him that I enjoyed and I wouldn't have minded at all if Janet had ended up with him. Actually, the scenes between Janet and Nash were so fraught with tension (some of the best scenes in the book) that I kept getting the feeling that I missed a prequel novella or some other sort of story including the characters that set up the antagonism. It's a feeling I got more than once while I was reading.

It probably doesn't sound like it, but to be honest, I didn't dislike Stormwalker. There were several things that bothered me about it, but overall, I was entertained while reading it and there were things I admired about Janet - most notably how she chose to end her relationship with Mick five years ago and the reasons for it. I wish I'd gotten out of a bad relationship like she had back when I was her age. That sort of strength is laudable, and isn't at all impacted by her decision to let Mick back into her life and heart now that they're in a different time and place and are different people (mostly). The development of their relationship felt realistic and organic to the characters and the revelations during it were awesome.

If I hadn't already decided to give the second book in the series, Firewalker, a try based on my appreciation for a lead character who isn't stupid and who I didn't despise, as well as the potential for development of the series, what I found out about Mick would have made me grab it anyway to see where his storyline goes. I have to admit, though, I'll be hoping for a tighter plot with better pacing and a bit more depth in the world building in that one.

I would like to caution readers more familiar with the romances and paranormal romances of Allyson James and Jennifer Ashley that while there is a romantic thread between Janet and Mick, Stormwalker reads much more like an urban fantasy novel than a paranormal romance. Hard core PNR fans may be disappointed (though really, a dream or two about Mick...or Coyote...or Nash...or any combination of all three...should cure that right up) and/or put off by the first person point-of-view narrative. I enjoy UF as much as PNR, and am used to first person POV, so that was not a detractor in my review.