Stranger in the Room

The Indomitable Keye Street is Back 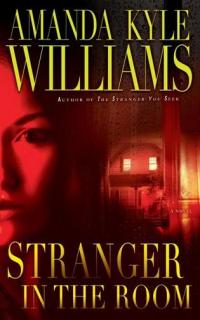 Disclosures:   An ARC of this book was provided to me by Bantam publisher Random House Publishing Group via NetGalley. This rating, review, and all included thoughts and comments are my own.

Atlanta private investigator, bounty hunter, and occasional police consultant Keye Street is feeling a little tense. She has been ever since she and her homicide detective boyfriend Aaron Rauser survived a couple of murder attempts last year, but the punishing southern summer heat of Atlanta in July is making it worse.

And it's times like this that Keye's demons ride her hardest.

Four years after her alcohol addiction destroyed her criminal profiling career with the FBI, the last thing recovering alcoholic Keye needs is her damaged, flawed cousin Miki calling her up and begging Keye to meet her at a nearby bar. But that's what you do for family.

Miki is freaked out. She claims that someone broke into her home, but after the police showed up and didn't find anything, they took one look at her record and blew her off. Thing is, Keye isn't sure she believes her either. She's been down this road before with her self-destructive cousin.

Then Keye finds a body in her cousin's living room, and the victim may be connected to Rauser's latest homicide case. Even as she kicks herself for not taking Miki seriously, this new development puts even more on Keye's plate. Now there's a murderous stalker on top of a bail jumper with bodily fluid issues and an investigation into a crematorium that may not be keeping the home fires burning.

The heat and the fear and the exhaustion on top of all of that start to make a drink sound like just the thing Keye needs to get her through. And this time, her demons may be too strong for her to defeat.

Amanda Kyle Williams is back with another long, sultry look into the day-to-day life of the mostly functional all-purpose bastion of law and order, Keye Street.

I love Williams' style. This isn't just a suspense novel or a psychological thriller. It is peccadillo-embracing, loony-relative-having, deep-fried-donut-eating Southern fiction wrapped around more than one bizarre case of varying criminality and horror. It's the sort of fiction you don't just read, you commit to, because by the time you're done, the narrative has taken you on such a slow, sweaty, southern journey that the characters are anywhere from old friends to bitter rivals...or both.

Keye is so deliciously flawed as a character. She's got issues. Big, juicy, career-ending, daily-struggle issues. And it's not just the alcoholism, though that is a huge part. Her life is a cautionary tale and Williams pulls no punches, as if she crafts every scene to display Keye's strengths and weaknesses in as harshly bright a light as possible. I love it.

I also love the subtle touches of quirkiness and humor, mostly sarcastic, that lighten Keye's nature (and the story) when things are at their most tense or bleakest. I love Keye's intelligence and her dedication to those she considers her people, be they close friends or family. Her cousin Miki is a real piece of work, but Keye handles her. Not always with kid gloves, but then again, Miki keeps trying to goad Keye into taking a drink. Lovely woman.

Keye still feels compelled to do the right thing. Miki is family. Period. End of discussion. So southern.

Unfortunately, the verdant, rich southern style did slow the pace of the tale. The first half of the book felt a bit boggy and plodding after the pulse-pounding start. As big a fan as I am of Keye and all her quirks, there was a lot of character-driven material in the first half, and the meat of the external, plot-driven story elements didn't really gear up until about midway through.

Once they do, several significant story elements built towards a surprising and satisfying conclusion that was ripe with personal danger and future implications. It's a good plot arc, for sure, and all the plot-driven elements were wonderfully convoluted and complex.

I wish less time had been spent focusing on Keye's never-ending obsession with alcohol. It's something that bothered me in the first book, as well. Her being an alcoholic (recovering) is a defining element of her character, I know. I just get a little weary of reading about it over and over throughout the story. Especially in this book, where I felt a more subtle application could have lent more emotional impact to events during the final conflict of the book.

That said, this book has provided me another solidly entertaining read. I love Keye, and while spending time in her head can get a bit harrowing at times, I find myself rooting for her. Liking her. Wanting her to be happy with Rauser and content in her job. Sober. Even when she makes me totally mental, I want her to triumph. But maybe that's just the Southern in me. Whatever it is, I hope we see more of Keye Street soon.

Return from Stranger in the Room to 2012 Book Reviews

Return from Stranger in the Room to OGBDA Book Reviews Home