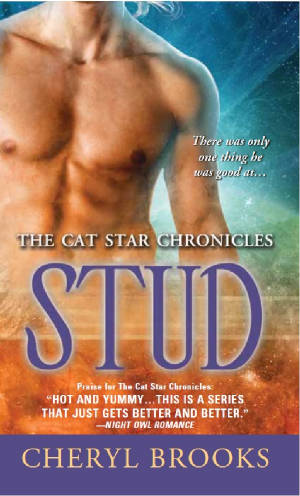 He is a refugee, a Zetithian without a planet and one of the last of his kind since his world was blown out of the galaxy by a jealous, sadistic husband. He is revered as a sexual dynamo. It's both his job, and, as he and his brethren are tasked with saving his kind from extinction by reproducing in quantity, his calling. And he's gotten very, very rich from it. Women from all over the universe pay just about anything for a few hours in his bed, for a chance to bear his children. He has five hundred of them, now, but his duty is not yet finished.

That's why he's on Terran. Human women are known for being intensely attracted to his kind. He already had several appointments to further spread his seed. And then, intending nothing more salacious than a simple meal, Tarq Zulveidinoe enters the restaurant where Lucinda Force works as a waitress for her demanding father, and life will never be the same for him again.

She smells so good. It's unlike anything he's ever scented before, and he wants her madly. She may even be his mate. Her scent has him ready to pound nails and his fangs are ready to nip at her skin. But he is not worthy of her. Of that he has no doubt. And even though she wants him to sire her children, she doesn't want to keep him.

If only he had the time to try to convince her.

Lucy can't even look at Tarq without wanting him. Who could? He's gorgeous, built, and charming. His reputation as a galaxy-hopping love machine is legendary. He doesn't even charge women to sleep with him anymore, he's so rich. He just wants to reproduce, to increase the numbers of his race.

Fortunately, that works out nicely for Lucy. At almost thirty, she's desperate for children, but her father keeps her mired in indentured servitude and won't even let her date, let alone marry and have children. She's still a virgin, for pity's sake. But when the deliciously appealing Tarq asks her to call him, to be with him, she decides to grab for her future with both hands.

She'll have Tarq impregnate her, then she'll flee her imposing father, find her happiness, and start her life for real as she raises her children. And if she'll never forget the Zetithian who made her heart happy, well, it's not like he hasn't a string of lovers in the galaxy. She knows he'd never want her for life. She's too plain, too provincial, too...Lucy...to ever hold onto the man she so quickly and irrevocably fell in love with.

There are some books that just aren't good fits for me, and this one is one of them. I didn't have a problem with it being the eighth book in an existing series. It read fine as a stand-alone. Unfortunately, little else in the book appealed, despite me sort of liking the Zetithian backstory and enjoying the external plot threads in the second half of the book.

The biggest problem I had with the story was the relationship conflict between Tarq and Lucy. Not only was it something that could have been easily resolved with just a smidgen of honest communication between them, but it was belabored throughout the entire book. Mentioned so often, in fact, that it lent the narrative an overall feeling of repetition and made it hard not to toss my Kindle against the wall.

He loves her, but he thinks he's stupid because he can't read and he's bedded more women than an NBA basketball team (to the nth power). She's all things good and kind and would never want to be his mate. She loves him, but she's plain and ordinary, and could never hold the attention of someone as worldly and experienced as he. He would never want to stay with her. These insecurities are brought up again and again, ad nauseam. And despite the loving actions of both towards each other, neither finds the stones to even broach the subject with the other. This is not my idea of scintillating romantic conflict.

It wasn't until the second half of the book that some external conflict elements were introduced and the plot expanded beyond the romance. Some of those elements were quite nice, but I would have appreciated a bit more depth and detail. It served, though, to lessen the constant mentions of Tarq's and Lucy's insecurities, even if it didn't extinguish them completely. I wish it had.

Thick and long, it curved toward her like a snake about to strike, the scalloped head aimed right at her, orgasmic syrup dripping like venom from the points.

Wow. Yeah. That's...well...more scary than sexy to me, no matter how nice Tarq's snard (yes, that's the Zetithian word for his ejaculate) tastes (like a hot fudge sundae, apparently). And that wasn't the only disturbing thing about his body or his talents. Practically prehensile manly bits are nice in theory, but kind of disturbing in context.

After eight books, I have to assume that Brooks has a wide following, that there are many fans of this series. I wish her nothing but the best for the continued success. After Stud, however, I can't say I'll be along for the ride. This one just wasn't my cup of tea.

That quote had me laughing out loud. This sounds like a miss for me as well... so glad you do these reviews :) Saves me some money. And 400+ pages? Even more of a turn off.

OMG - I HAD to include that quote in my review because it took me two reads of that line to believe what I was reading. I just kept thinking, "Uh...that's one fanged serpent that would be getting NOWHERE near my female bits."

Venom-tipped? POINTS?!?! Male genitals with POINTS (as if ONE point isn't bad enough, there is apparently more than one!!) - does that SOUND sexy to you????

This book definitely strained a few of my disbelief buttons!

Return to top of Stud by Cheryl Brooks