Kicking Butt with Cady and Co. 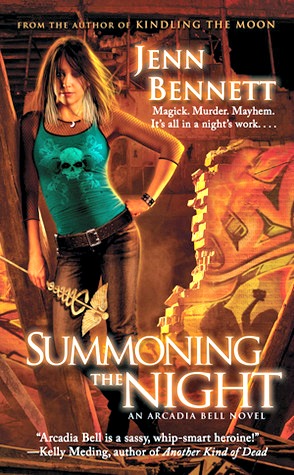 Disclosure:   An ARC of this book was provided to me by the author. This rating, review, and all included thoughts and comments are my own.

If Arcadia Bell thought surviving her parents' Machiavellian plot was going to allow her to get back to the life she was living before they tried to sacrifice her to a ritual slaying...well, she was right. Mostly. She's settled back into her job at her tiki bar, and her relationship with Earthbound demon Lon Butler is progressing nicely. So is the one between her and Lon's son, Jupe. They're almost like a family.

Thing is, just because Cady is able to relax into a relatively normal day-to-day life doesn't mean that peace is going to last long. Before she gets too comfortable, a dark cloud of evil intention cloaks the city in tension and fear, one that directly threatens Earthbound young. A madman is kidnapping the children of the members of the Hellfire Club. The powerful head of that club, Ambrose Dare, wants it stopped before a heinous tragedy thirty years in the past is repeated in brutal, vicious fashion.

Lon may vouch for the Earthbound demon Dare, but Cady doesn't trust anyone or anything connected to the thrice damned Hellfire Club. Not to mention, tracking down a couple of missing teenagers isn't exactly in her skill set. Dare's request is compelling, though, and her power and magical skill may be all that stands between a power-hungry psychopath and the slaughtered bodies of seven children. With Lon at her side and an irrepressible Jupe winding around her heart, Cady agrees to stop the killer.

She's got to find him first, though, and the search itself may expose more than a trail to a madman. It may strip her bare and leave her helpless against someone who wants to use her power for their own ruthless games.

It can't be overstated just how much I enjoy the characters in this book. I like Cady quite a lot, have a huge soft spot for the taciturn Lon, and absolutely adore the irrepressible Jupe. The three of them together, hashing out an odd and quirky little family, are a joy and a delight, even in these early stages. I sincerely hope that continues and both strengthens and deepens as the series progresses, because I can't imagine losing either male from Cady's life. Not when the boys are so darn good for her - Lon as a partner, friend, and lover who grounds Cady and touches her heart, and Jupe as a glittering, vibrant connection to youthful normalcy (relatively speaking) that Cady missed out on while she was growing up.

All three characters are vital to this series for me.

On her own merits, Cady is a solid heroine. She's strong and competent, and her command over her magic has always seemed nicely representative of her history and her experiences. She is also a bit emotionally damaged and inherently wounded from a past that would have left many broken. Sometimes she makes mistakes, and she certainly doesn't open herself or trust easily. I can't say I blame her for that, even when I get a little frustrated by it. It's definitely in line with who she is, and I commend Bennett for creating such a layered and realistic character and maintaining her well through the growing pains we see her encounter in the series.

The plot of this second book was less intense and compelling to me than that of the first, but that's hardly surprising. In the first book, Cady's life is on the line and the entire foundation of that life, as well as every memory and belief she had of her parents and her family, was brought under fire and burned away by a truth both harsh and criminally brutal. Maybe it's me, but the kidnapping of unknown teenagers, children of parents who are members of a club I hold in great contempt, just didn't have the same emotional impact. That's not a fault of Bennett's writing, it just is what it is.

I do wish the timeline of the plot had been tightened up a bit. I was already struggling to connect to it because of the nature of the conflict, and that was made harder by the meandering trail Cady and Lon were following to get to the truth. Nothing about their investigation really struck me as vitally time sensitive or having any sense of urgency, including the actions of the main characters, until late in the book when the job became far more personal.

My attention was more riveted by the secondary and ancillary plot threads surrounding Lon and Cady's evolving relationship, Jupe's developing knack, and the growing cohesion of their little family-shaped unit. They provided me the brightest and most entertaining parts of the story. I also enjoyed some of the secondary characters, both those familiar from the first book and new to the series. There were scenes related to the investigation that do stand out, though, and I have to admit, I kind of totally liked Hajo...maybe even more than I should, considering he was a dangerous thug and a drug-dealing junkie.

There are also things about the story that bothered me or that I just didn't like at all. While I applauded Cady's personal growth and subsequent admission to Lon that she didn't want secrets between them, I was furious when Dare started stirring things up and she didn't tell Lon about it. Not only did Dare reveal himself as the repugnant filth that he is, which as far as I'm concerned stamped an end date on his forehead, but Cady compounded my disgust by keeping it all a secret.

Best case given the timeline, she may not have done so purposely, but she definitely did so passively by not immediately disclosing the information to Lon. I don't know which it is, but regardless, she holds onto her secrets and seems to have no inclination to share them. Maybe that'll be addressed in the next book, but that sort of crap just frustrates the hell out of me. Sort of decries all that personal growth that so pleased me earlier in the book.

On a brighter note, I was pleased to realize that I no longer have any issue with the age difference between Lon and Cady. I was very disappointed in myself about my feelings about that in the first book, but in this one, something about the way the two of them fit together absolutely resolved all of my qualms. Maybe a part of it was having their relationship disparaged and criticized by outsiders, too. I know I'm prone to rally around my heroes and heroines when they are threatened. Whatever it is, I'm happy to be free of my reservations about the difference in their ages and wish nothing but a long and happy relationship for them.

Unfortunately I've been burned a lot in urban fantasy series I follow, too often getting dismayed and horrified by series that totally muck up the relationships between main characters, or pile on the emotional angst until I'm choking in it. I so wish that won't be the case here. I'd love to read a series that doesn't equate relationship and personal growth with agonizing emotional pain or betrayal. That truly would be a unique and heartening reading experience.

Hope springs eternal, doesn't it? And given how much I love the characters in this book, and how invested I am in their lives and their story, all of which is a huge credit to Bennett's writing, I can't help but continue with the series to see just what they get themselves messed up in next. I just hope it comes soon.

I love this series so much. I'm with you - I hope the quality stands up over time because I need at least one non angsty heroine and series. This one is really refreshing.

Wouldn't it be great if Lon and Cady stay non-angsty? We're of a mind, Karen. At least ONE series without the angst would be awesome. Thanks for commenting!

Return from Summoning the Night to Urban Fantasy

Return from Summoning the Night to OGBDA Book Review Home