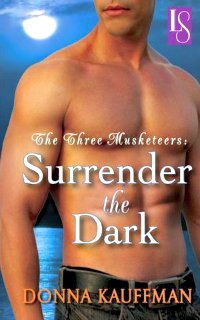 Two years wasn't long enough. It's been that long since the last time Rae Gannon saw her former boss Jarrett McCullough, since she returned home after being freed from the captives who had tortured and nearly broken her only to realize that the man who had hired her and groomed her into one of his top covert couriers had blacklisted her. He couldn't risk the chance that either she or the information she carried was compromised, so she was out.

It was worse than the torture and captivity combined.

For the two years since, Rae has struggled to put her life back together. She retreated from the world, settled into a private home deep in the mountains, and worked through her issues with her art - something she'd picked up during the long months of therapy. It worked for her...most of the time.

Stumbling over the bloody body of a seriously wounded and unconscious McCullough not even a stone's throw from her mountain sanctuary was not one of those times.

Saving the life of a man she hated bred enough resentment to fuel her art for years to come, but Rae had no intention of letting him die in her home. Patch him up, get him out. That was the plan. Problem is, a conscious but vulnerable McCullough is a far more dangerous beast than she'd ever dreamed. She hates her body's traitorous response to the sheer approachable masculinity of the man almost as much as she hates what he asks her to do.

Another solid re-release of a Kauffman classic from Loveswept! I love finding previously released authors who have slipped under my radar, and Kauffman impressed me on a lot of different levels with this one. The characters' backstory was truly excellent and I love how deftly Kauffman fit their complex and emotional history into the tapestry of their story.

I loved Rae and Jarrett. Rae was a hard core survivor, and her reaction to having Jarrett in her home, being forced to nurse him back to health out of common decency, was maybe my favorite part of the book. I love how she faced him, called him on the roll he took in their past, and challenged him at every turn. She was fairly awesome. And even when she started to soften, when she started to feel attraction for him, the conflict of her emotions added a layer of depth to the story I appreciated.

Jarrett was a bit harder to warm up to for me, in large part because of a scene in the very beginning of the book. I started to appreciate him more and more as the story progressed. He was unflinching in his acknowledgement of the sins and omissions of his past, but shaken by the effect it had on Rae. It sparks a metamorphosis in him that felt very organic to his character, as if he's slowly waking up to the human element that had bled from his life as a byproduct of his commitment to his cause.

The enemies-to-lovers storyline here was powerful, and though it happens over a short span of time, usually one of my bugaboos, the history between them muted that issue enough that I was able to enjoy their romance. The secondary storyline, a thread of suspense that wends its way through the book, provided the impetus behind the majority of the characters' actions, but it lacked the sort of detail and description necessary to really sustain itself consistently.

My only serious issue with the book was, unfortunately, the end. Up until the climax and subsequent resolution, I was enjoying the read quite a lot, but then the characters' romance thread intersected with the suspense thread and things went a little wonky for me. Suddenly it was like Rae and Jarrett were on a relationship fast-forward, and their HEA took on a sort of forced, cheesy, chick flick tone that didn't appeal to me at all. Or make much sense. I just couldn't figure out why the rush to the end point in the book, given everything.

Though this Kauffman re-release was shorter than I'd expected, ending at the 82% mark on my Kindle, and I had some problems with the end of the story, this was still a fun read with a more complex emotional landscape than I was expecting. Rae and Jarrett were great characters, and Kauffman, new-to-me before I started this book, detailed their evolving relationship with aplomb.

I've enjoyed some of her older stuff. Might give this a try.

Hey, Julia. It was an author first read for me, but I was pretty blown away by the weight that the characters' history gave the read. If you try, hope you enjoy.

Return from Surrender the Dark to Romantic Suspense

Return from Surrender the Dark to OGBDA Book Reviews Home