Take a Chance on Me 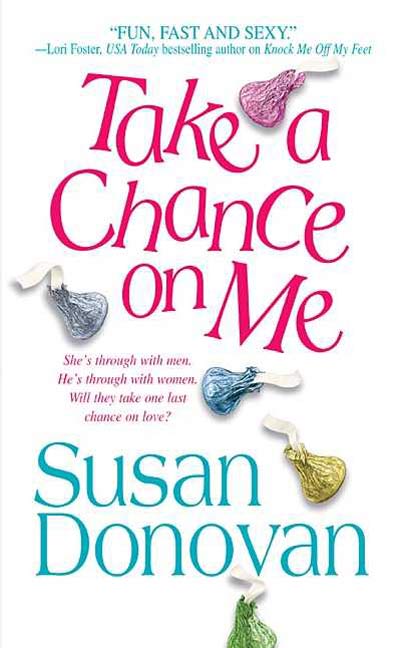 Feeling responsible for the murder of his informant, undercover investigator Thomas Tobin took responsibility for the weirdest dog he's ever seen, the mostly bald Chinese Crested named, ironically, Hairy. Unfortunately Hairy's got some big issues, and Thomas can't seem to pawn the trembling, urinating, rat-looking thing off on anyone. To save his sanity, he finally takes Hairy to veterinarian and animal behaviorist Dr. Emma Jenkins, but one look at the lush beauty and the normally dour and forbidding Thomas can't seem to keep his mind out of the kennel. Only problem is, Thomas knows he's got nothing to offer Emma, certainly not what she deserves.

Still recovering from a disastrous marriage that rocked her self esteem, Emma Jenkins doesn't have much faith in her own appeal, though when Thomas Tobin brings Hairy to see her, he proves that at least all her female parts are working just fine. One look at the tall, dark, and brooding man and all her juices more than flow, they do a do-si-do and a quick two step, too. But Thomas has a disturbing habit of not being altogether truthful with her, and he's the master of mixed signals. Frankly, Emma's life would be far less complicated if she just focused on her clinic and raising the daughter of her deceased best friend.

As wounded as he is by a rocky past and a dark life of undercover work, Thomas recognizes a great thing when he sees it. He just has to convince Emma to give him a chance. And maybe Hairy is more than the key to catch a killer, maybe he's the key to winning a woman's heart, as well.

Take a Chance on Me is a cute, quirky romance with lead characters with a surprising amount of depth. They tote around a fair amount of realistic baggage and have a ton of insecurities, their responsibilities aren't always comfortable or easy, and the damage from their past is well represented in their developing relationship. Secondary and ancillary characters are nicely fleshed out, as well, especially LeeLee, who I found to be very genuine and very believable given her past. Hairy the Chinese Crested was a total trip. I loved how he was given his own voice. It could have been easily overdone, but Donovan kept it from tripping over into the absurd.

I wasn't totally on board with the suspense aspects of the plot, but as it wasn't the driving force of the book by any means, it didn't overly affect my impressions. My main issue with it is strictly based on personal preference, anyway, so it's purely subjective. I prefer when antagonists in suspense aren't revealed quite so soon, because it often makes plot twists too easy to spot as they approach, and that was the case here. On the bright side, I found the killer's descent into desperation well written.

The evolution of the relationship between Emma and Thomas was the core of the book, and there were lots of good things there. Not only were the characters given individual identities and a full, rich sense of history and personality on their own terms, they were featured in situations beyond their relationships (more Emma than Thomas, actually), so readers get a very clear idea of what their lives are like outside of the burgeoning romance. That was a nice touch that really appealed to me.

To be honest, though, there was a conflict between Thomas and Emma that really bothered me. Thomas acted in a manner that I found pretty unforgivable and the resolution of that situation didn't really address the core issue. As a result, a pretty egregious lack of trust got glossed over after the melee that followed, and it really bothered me that it was so quickly accepted and forgiven.

That was the only real problem I had with this cute, humorous romance with its suspense subplot. I've enjoyed both Susan Donovan books I've read, and that certainly bodes well for future reading opportunities. And I continue to be very impressed with the dimension and depth provided to primary and secondary characters. For quickly paced, mostly lighthearted, humorous romance with a pleasing amount of sizzle and a pinch of suspense, Donovan is a good bet.

Return from Take a Chance on Me to Contemporary Romance Genre