Taken By A Killer 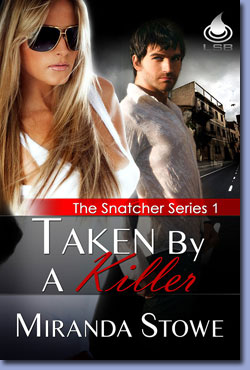 For two long years a predator has stalked the women of Miners Bend. Seven young women have been taken. Six broken, desecrated bodies have been found. The cops are clueless, the town is scared, and the single men are...well...hard up.

Emily Hayden, police dispatcher, is armed and willing to defend herself against any threat. Fortunately, her weapons come in just as handy against total dogs like Reece Daggart. She doesn't know what it is about that guy, but ever since they were in grade school he's gone out of his way to make her life hell. Picking on her, taunting her, poking at her every time their paths cross. It's enough to drive a woman crazy even as she strives to avoid him.

Sure, Reece has been feeling the bite the curfew has taken out of his social life, but it's Emily he wants. It's always been Emily. Not that he's ever been able to tell her. She's too adept at the cold shoulder whenever he's anywhere near her. Admittedly, he pokes at her constantly. He can't help himself. It's the only way he can get close to her at all.

To be honest, Reece hasn't given a whole lot of serious thought to the serial killer terrorizing Miners Bend. At least, not until the day he goes over to his little sister Janna's house and walks into a scene of violent struggle, sees the blood, the overturned furniture, broken glass and ruined rugs. But no Janna. Suddenly the Snatcher's crimes hit far, far too close to home, rocking Reece and leaving him floundering.

Filled with compassion, driven by her own unrequited feelings, Emily offers Reece a hand that gets out of hand, and as Reece's life spirals out of control, he turns to Emily again and again. Emily has to wonder...when all this is over, whatever the result, will playboy Reece still want her around or will she be just another broken-hearted statistic of a different sort of lady killer altogether.

Wow, I'll say this much for new-to-me author Miranda Stowe, she packs a bunch of story into a novella. And she does it with a slick, sophisticated writing style that impressed me on every front. Main characters had enough depth to be sympathetic, secondary characters were fleshed out a bit, and both elements of the plot, the suspense and the romance, had enough meat on their bones to satisfy.

The Snatcher's plot threads were intensely disturbing, which is exactly how I like my serial killer stories. I admit, I wasn't expecting those scenes to be quite as viscerally powerful or have as much emotional impact as they do in this shorter-length story format. Stowe makes good use of her space in this series, though, starting the Snatcher's plot threads here and wending it through each subsequent book. It's not so great for readers who want resolution at the end of each novella, but I like it very much.

I really enjoyed Reece and Emily as a couple, too. They have a lot of fire and passion in their relationship, especially in the antagonistic phases of it. The narrative gives readers a lovely glimpse of their true feelings, despite the open hostilities, and with the length of time they've had those feelings, it tempers the ribald sexiness with a sweetness that, frankly, was needed. Reece and his friends initially struck me as egotistical, womanizing pigs, and that cute sweetness inherent in Reece's feelings for Emily sort of redeemed him in that regard.

There were a couple of things that didn't sit as well for me, though. I struggled with Reece's reactions to his sister's abduction. He was so devastated, pushed into a state near catatonia, and I can't say I found that all that believable. His emotional responses struck me as overly exaggerated, or more in keeping with what I would assume would be the emotional reaction of a parent or a husband of an abducted woman. Maybe they were incredibly close siblings, but as I was reading, it kept hitting my awareness button as being too extreme for the situation.

Not every sex scene bothered me, I don't want to give that impression, but enough to mention and impact my enjoyment of the overall read.

Stowe handled the enemies-to-lovers theme for the romance very well, though, and despite the very abrupt ending, and the two issues I had with this story, the suspense threads are top notch. I have every intention of continuing with this series and experiencing more of the smooth sophistication of Stowe's writing...even as she horrifies me with the terror of the Snatcher and all his heinous crimes.

Return from Taken By A Killer to Romantic Suspense Genre

Return from Taken By A Killer to OGBDA Book Review Home