Taken by the Night 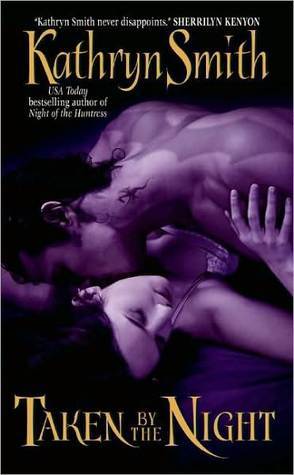 Ivy Dearing is a modern woman of twenty-seven and there isn't much in life that surprises her, certainly nothing regarding relations between a man and a woman. As the daughter of the madam of Maison Rouge, an eminent house of prostitution in London, she's grown up knowing more than the average young lady about what goes on between the genders. As the daughter of a woman cast aside by a married lover and forced to rely on the good nature of the vampire Saint, she's familiar with the vampires that the Maison Rouge protects and provides for - in every way - and disbelieving in the concept of love. Lust she understands. Love is a farce perpetrated on the feeble minded.

The year is 1899 and Ivy has lost two dear friends to the blade of a butcher who did unspeakable things to them...took unspeakable things from them. She's desperate for help to catch a killer, as the coppers of London don't put themselves out much for a couple of dead prostitutes. When Saint shows up at the Maison Rouge for the first time in a decade, Ivy takes it upon herself to remind him of all the house has done for him and his brethren over the years and demand his help to stop a madman before more fall under his blade.

For over six hundred years Saint has been thief, reprobate, killer, and lover of women, but his actions have toned down considerably since the death of his beloved Marta twenty-five years ago. He goes to Maison Rouge to visit old friends and to rest for a bit. He's poleaxed by the vision that is Ivy Dearing, the challenging and impertinent chit. Feeling all of his immortal years bearing heavily on him as he realizes the child of seventeen he'd last seen a decade ago is a child no more, he can't stop thinking about her...wanting her. She challenges his honor and he vows to catch a killer for her. She challenges the notion of love...and he vows to love her forever. And forever for his kind is a very long time indeed.

Despite not being the biggest fan of historical fiction of any sort, I have to admit, Kathryn Smith's Brotherhood of The Blood series has really grown on me. I wasn't overly fond of the first, but I enjoyed the second very much, and with Saint and Ivy's story, I'm firmly a fan...even though I preferred the characters in the previous book just a bit more.

I can't speak intelligently on the historical accuracy of the dialogue or the settings, but I can say that Smith can blend a gruesome murder mystery with a sensual romance and grace her readers with a well-paced plot that's ripe with style and full of emotion. I enjoyed the sense of history, regardless of whether it was historically accurate, and I really loved how Smith not only addressed the parallels between the murderer in the book and the infamous killer Jack the Ripper, but incorporated those parallels into the backstory and plot. I thought that was particularly well done. So too Smith's vampire mythos, which I've enjoyed from the beginning of the series. There's a plethora of vampire-themed series out there, and I've read lots of them, and I think the history of the Brotherhood of The Blood combined with the historical setting and the evolution of the individual characters in each book has provided just enough of a twist to the mythos to give it a unique, imaginative, and fresh feel.

I can't say I was totally thrilled with Ivy as a character. I appreciated her independence and intelligence, and I loved her profession/art, but found her personality grating when things didn't go her way and frustratingly obtuse when it came to her feelings. Saint, on the other hand, was very appealing. I liked the turnabout of having Saint as the romantic and believer in love and Ivy the doubter who is willing to embrace her lust but keeps her heart disengaged, but I found Ivy's belligerent refusal to even entertain the notion of love wore on my patience after a while, and the resolution of that seemed oddly placed and a bit peculiar.

There was an odd time jump towards the conclusion of the book that I wish had developed differently, but I was very pleased with the tie-in to the events of and conclusion in Night of the Huntress and very much look forward to seeing where the series goes from here. I'm a fan of this series, a fan of Kathryn Smith's unique and stylistic writing, and a huge fan of the brothers themselves. I hope to see a book that puts all the brothers and their women together to deal with the Order of the Silver Palm. That's just a personal dream, though. I'm sure I'll enjoy however this series develops.

Return from Taken by the Night to Historical Romance Genre

Return from Taken by the Night to OGBDA Book Reviews Home