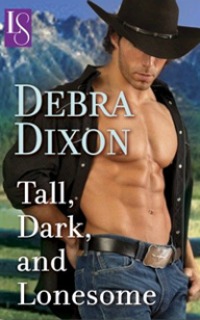 Disclosure: An ARC of this book was provided to me by Loveswept publisher Random House via NetGalley. This rating, review, and all included thoughts and comments are my own.

New York City newspaper columnist Niki Devlin gave her editor just enough rope to hang her with when she blurted out that she was from the small town of Cutter's Creek, Wyoming after he proposed a series of columns on adventure vacations and mentioned a ranch there that ran a modern day cattle drive. He certainly wasn't going to let her weasel out of the assignment, so she had no choice but to suck it up, do her job, and get gone. She'd have to. Even after all these years, she's still the hometown pariah. Still the source of gossip and fodder for past mistakes. And she still bears the scars of the emotional pain and loss of what happened all those years ago.

The female reporter doing a series of articles on the drive is a bit of an enigma to ranch owner and trail boss Zach Weston. An up and comer in the state's political scene, his party is pushing him to run for state senate, and he's going to make the decision to run or not while out on the trail - the best place for him to get his mind straight. The problem is the delectable Niki and the instant attraction he feels for her. It keeps his mind anywhere but straight from the moment of their less than auspicious introduction.

She's lively and bright, witty and sexy, and it doesn't take long for him to figure out who she really is. What he doesn't know is what darkness lies behind the wall she defends with a breezy free spirit and lots of sass. Whatever it is, Zach is confident he's ready to deal with it, because the closer she lets him get, the more he realizes that he wants Niki in his life for far longer than the span of a cattle drive.

It started so well. Both characters made great first impressions. I was charmed by Niki's spunky personality and smart mouth, and Zach's rugged intensity was coupled with an appealing playful charm. Their chemistry was instant and strong and their dialogue was fun and flirty. The back drop for the romance, the cattle drive, brought to mind fond memories of the movie City Slickers, still a favorite of mine after all these years. All told, Tall, Dark, and Lonesome was working for me very well at the beginning.

Then the beginning ended.

Zack and Niki's burgeoning relationship began early enough in the book to surprise me. I prefer characters at least get introduced and fleshed out a bit for the reader before their relationship starts, and there just wasn't enough of that groundwork laid by the time they start to first cave to their attraction at the 11% mark.

To be fair, that 11% mark turned out to be very misleading. The book length is listed at 240 pages (www.randomhouse.com), but I read on a 2nd Gen Kindle, so I don't see page numbers. I have locations and percentages (which seem to have no correlation to page numbers whatsoever that I've ever been able to tell). As it turns out, this story ended at the 57% mark, or location 2078 of 3594 on the Galley that was provided to me for this review. The remaining 43% provided previews of other Loveswept titles. Given that, the romantic relationship between Zack and Niki actually started about 20% into the story. Still quick for me given where the story was at the time, but less so.

The bigger problem for me was how Niki's personality changed so completely after the romance started to develop. Gone was the spunk and sass and instead she became rather quiet and maudlin about her past and negative about any potential future with Zack. And she had a ridiculously inflated opinion of her own relevance in her hometown given the way she still felt so persecuted and judged by everyone there for getting knocked up by a high school football player at sixteen.

Despite the many years that have passed since then (close to or near ten, if I understood correctly), she still doesn't go home often and when she does, she slinks in and out like a thief in the night because of the town's prejudice against her. She's also asked her family not to mention her or bring her up to other people despite living for years in New York City and having a successful career as a nationally syndicated columnist. That seemed amazingly excessive to me, especially as readers are given no evidence of any lingering prejudice against her in the book. It's hard to think of her vehemence and continued angst over it as anything more than an unappealing persecution complex.

Then there was the fact that Zach was going into politics and this sent Niki into a meltdown. The idea of living in a fishbowl gave her a panic attack and she was sure that any relationship he had with her would ruin his career because of her past. This is where it felt like the original publication date of December 1993 made a negative impact. An eighteen year span of time that includes a Presidential impeachment, several dozen salacious political scandals on state and federal levels, a massive influx of pernicious reality television, a Vice Presidential nominee with a daughter who is an unwed teen-aged mother, and a disturbing trend in the social-sexual revolution (or...you know...tweeting/texting pictures of...optimistic genitalia to any and every potential sexual partner on the planet) has sort of inured me to the scandal potential of a teen pregnancy that ended in miscarriage a decade before a potential couple even knew each other.

And you know what? All of that still wasn't what really killed the book for me. Truth is, the book had some fun and entertaining moments and those moments helped balance out my issues. Well...most of them, anyway. Then came the iceberg that sunk the ship.

Zach and Niki have a sweet, tender, slow and sensual love scene that would have been fantastic...had either of them even once discussed, addressed, or even thought about protection or birth control - or used any. And it isn't until long minutes after they have sex, after some cuddling, kissing, and pillow talk, that the issue of birth control (not STDs, mind you, just birth control) is even alluded to. Some authors and readers prefer it that way, thinking it's more romantic if it's not mentioned during the deed. Personally, I don't agree, but can understand the opinion...to a point.

That point doesn't extend to story or a main character who has done nothing but dwell on how horribly she was treated by the people in her hometown for getting pregnant when she was a teenager and still feels terribly guilty about a miscarriage she had a decade ago. In fact, the complete failure to even give a passing thought to birth control in this particular story with these particular characters in that particular situation was such a glaring oversight that I was quite literally gobsmacked by the whole sexual interlude and its aftermath.

If that wasn't bad enough, once it finally was mentioned, and the sudden jolt of reality sunk in, this was the thought process of the woman who is supposedly still so ravaged by an entire town of judgmental and prejudiced people that she hardly ever visits the family she loves and has been panicking about how her reputation would ruin her future with Zack:

At that point I had two choices: set my Kindle down for a while or slam it against the floor over and over and over again until it was in nothing but itty bitty pieces, because that had to be the single most ignorant and cavalier thing she could have possibly thought about a potential pregnancy at that moment. And she continues to have unprotected sex with the man over a period of several days!

Maybe this story is even more a victim of the year it was originally released than I'd thought. It's true that there is little I dislike more than a dated "contemporary" romance. Maybe I'm too disinclined to leniency in this case. Be that as it may, the birth control debacle was a coup de grâce so egregious to me that any glimmer of entertainment in the story disappeared completely. Honestly, I'd unread it if I could.

"Unread it if I could"... yeah I think I'll pass on this one. I've been noticing in a couple of categories I read recently that birth control isn't mentioned until after the fact too, but after that one time, and with assurances that the female is on the pill, it's never mentioned again. It's the weirdest thing.. what about STDs? Don't exist in the book's world? And what's wrong with just putting on a condom as part of the sex scene? It really would NOT kill the mood for me. I'd like the characters MORE if they did that!

I'm with you 100% on this one, Janicu. I find it jarring when condoms are not mentioned and can't enjoy the scenes as much when they're not. All I can think is, "Ewwww - Herpes, Gonorrhea, AIDS!!"

Sorta strips the eroticism from the moment for me, ya know?

And in this book, given the repetitive concern over her past pregnancy and the fallout, the lack was glaring.

Yes, the more I think about it, the more it gets icky.

I'm around, I just need to better about actually commenting! :D

Return to top of Tall, Dark, and Lonesome