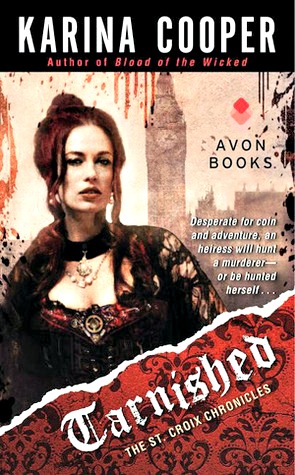 Disclosure:   An ARC of this book was provided to me by Avon Books publisher HarperCollins Publishers. This rating, review, and all included thoughts and comments are my own.

She straddles two worlds, belonging to none. Daughter of an accused madman, Cherry St. Croix was orphaned at a young age, forced by circumstance and a keen instinct for survival into the life of a thief, a circus performer, and an opium addict. At the tender age of nine, she picked her first pocket. By fifteen, she had been pulled out of that life and thrust into another, just as ill-fitting.

Found by her guardian and set adrift in polite society, she awaits the inheritance that is her due as she exists above the drift but on the fringes of London's proper noble class, far above the smog-choked, deadly streets below. To subsidize her meager monthly allowance, one grossly insufficient to feed a habit that allows her to sleep...such a pretty, pretty lie...Cherry dons trousers and blackens her hair, grabs her goggles and respirator, and as the haunting, hunting arms of night embrace her, she slips below the drift and stalks the streets. She is a collector.

Cherry suffers no fools and refuses to be cheated, so when a job falls through and the owner of the note of her collection denies the bounty she's owed, Cherry confronts him. Macajah Hawke, the elegant and imperious ringmaster of below's most affluent den of salacious inequity, The Midnight Menagerie, terrifies her with an odd, biting fear that grips her low in her stomach, but to allow him to brush her off as if she were a child would bring her career to a stuttering stop. Unfortunately, Hawke is unmoved and largely unimpressed, cloaked as he is in a seductive veneer that rattles and frustrates her.

Maybe that's why, when one of the Menagerie's ladies calls to her as she's leaving Hawke's playground of decadent corruption, she agrees to take on the new case, flagrantly opposing Hawke's dominion over his own people. But it's not just childish obstinacy, nor solely the hunger for the opium that she craves that drives her decision. Cherry has seen the papers, knows a monster hunts working girls below the drift, slicing them open and leaving grisly carnage in his wake.

She hadn't known that the monster had hunted Hawke's sweets. That girls from the Menagerie had been slaughtered. And now one of them has braved their master to beg for her help in finding and stopping him. Cherry couldn't turn her away. She was a collector, after all, and collecting things...people...even monsters, is what she does.

It's a pity that Cherry, for all her experience with a life less ordinary, forgot that when you start hunting monsters, they have a tendency to hunt you in return.

His shoulders moved, a powerful roll of indifference. "People have that tendency."

Though my experience with steampunk is passing at best, what I've read has appealed. Until Cooper, anyway, because this series debut did a lot more than appeal. Setting the story elements aside for the moment, Cooper's writing is brilliant. Evocative and compelling, descriptive to the point of artistry, Cooper uses words to paint gritty and glaring pictures that expose the corrosive cracks in life both above the drift, where Society reigns, and below, where other, far more in-your-face but no less dangerous dregs of humanity roam.

The narrative seemed an effortless capture of the pulse of both, with the deftest of touches highlighting even more of the similarities between the two than the differences. A cut above may be bloodless, but no less painful than the cuts below. And at least a cut below, widened by sharpened steel instead of waspish tongues, bleeds clean and is honest in its intent. A lesson with which Cherry is well familiar.

At the center of this magically groggy world that Cooper built is the young Cherry, as much a contradiction as the two worlds in which she operates. Part leather-clad warrior woman, intelligent and cunning and phsyically self-possessed, part innocent young miss, part victim and criminal both, she reflects all facets of both worlds in which she lives. Her age, only twenty, is both a boon and a bane in this debut, because while she has the unflagging courage and irrepressible spirit of youth, she is also stubborn, more spoiled than she realizes, and often petulant about it and anything else that doesn't directly go her way.

On one hand she is an experienced collector, someone who has been dragging bounties around for five years, protecting herself in London's seediest streets. On the other, she's a virginal miss without any real experience in a man's world, one of little patience and oblivious to the benefits and necessities of subtle behavior. I found the battle between the two parts of her to be just as compelling...if not more so...than the main plotline of the book.

In fact, I had some problems with the book's plot, which meandered a little to much for me, especially in the middle. Cooper seemed so intent on building her world and fleshing it out, as well as focusing on creating and embellishing the framework for the two faces of Cherry, that the serious threads of external plot conflict often fell to the wayside.

When the storyline started to focus too long on Cherry's role in Society above the drift, including frequent and robust descriptions of hair, clothing, rooms, characters, and the like, I felt my attention waning. For all that the pictures were well painted and the life she led was just as valid as the one below, just as vital to grasping the whole of her character...well...I got a little bored with it. Below the drift was just more interesting to me.

Maybe because Hawke was below the drift. Micajah Hawke. He definitely held my interest. He is just as dual-natured as Cherry herself, but he's in a class all his own. Mysterious, seductive, urbane on one hand, and masculine, hard-working, intensely focused on the other. Unlike Cherry, who often suffers from the perils of her youth, Hawke is in all ways adult. World-wise, jaded, and very, very uncompromising. He is darkness personified, a darkness that both revels in and reviles that which seeks its shadowy embrace.

The relationship, such as it is, between Hawke and Cherry reminded me of the early books in Karen Marie Moning's Fever series, because Micajah Hawke could be Jericho Z. Barrons' equally inscrutable but slightly less immortal brother. And at every single one of Hawke's tight-jawed, "Miss Black" utterances, I heard "Miss Lane" echoing in Barron's deep voice.

Less fortunately, Cherry reminded me of Mac in more ways than one. That's not quite a good thing, because I spent most of the Fever series in various stages of annoyance with Mac's immaturity, even as I loved her fighting nature, and that's exactly the vibe Cherry was throwing off in her own story (though, admittedly, to a much less annoying extent). If, however, Cherry and Hawke have nearly as incendiary a relationship as Moning's characters, well...I'll suck it up just as I did before, because that's one phenomenally bumpy and hellaciously fun ride.

Even with this being a series debut, with my expectations set to accept a certain number of unanswered questions, there were a few too many plot threads left unresolved or characters unexplained for me to be completely satisfied with the story itself. Because of that, my biggest issue with this book is that as a whole, it read more like a prelude or prologue to a series than it did a fully satisfying book that stands on its own merits. While one or two plot threads may have been tied up at the end, many more linger, and those that were tied up weren't really the most intriguing of the lot.

It was, however, exquisitely clever in its conception and beautiful in its construction. The characters are vibrant, complex, and complicated. The world they live in is deceptive and dangerous. For me, this debut just had a little too much focus on the series setup at the expense of story elements for the individual book. If the series progresses with a larger emphasis on story now that a majority of the setup is laid, The St. Croix Chronicles may very well be my next personal reading addiction and Cooper my newest must-read author.

Return from Tarnished to Genres