Too Much And Not Nearly Enough 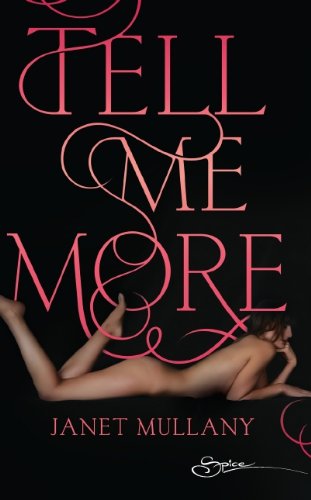 Disclosure: An ARC of this book was provided to me by Spice Books publisher Harlequin via NetGalley. This rating, review, and all included thoughts and comments are my own.

Late night on-air radio personality Jo Hutchinson has feelings for a man she's never met. He calls into her show and talks to her, has for months now, and the openness and honesty in those talks form the bonds of a deep connection, until her life on and off air seems to revolve around those calls. She doesn't even know his name, yet as time goes on, he becomes her world.

As her journey into the world of fantasy pulls her further and further away from the life and friends she's known, Jo slowly starts to realize that there is a sinister side to sexuality, a more dangerous side, and her Mr. D. has been keeping secrets from her as he manipulated her into situations that proved untenable. It isn't until Jo tries to distance herself from the Association, a fancy name for the sex club she joined, that she starts to realize that life outside her fantasies has something in its favor. Most notably the good looking, slightly geeky Patrick Delaney, who reminds Jo just what it means to connect to someone in reality.

Walking away from the dark side is never without its risks, however, and is nowhere near as clean a break as she'd hoped. Her past haunts her, people from it harass her, and none of them want to let her go. Least of all the duplicitous Mr. D.

In an ideal world, I'd read a book, review it, then start the next one in my obscenely large pile of TBRs. I do not live in an ideal world. For Tell Me More, though, that turns out to be a good thing, because if I had reviewed this book upon finishing it, this would be a much different review with a much lower rating. I've calmed down about it now, but the last quarter of this book had the unfortunate result of pissing me off more than any book I've read in recent...and not-so-recent memory.

For the first seventy percent of it, I was quite entertained by the quirky character of Jo and the utterly enchanting Patrick. There's a lot of sex in the book; even for an erotic romance, there's a hell of a lot of sex, but the scenes are well-written and though explicit, they didn't seem crass or overly gratuitous. What impressed me most about the book, however, was that when I looked beyond the sex, I found a surprisingly complex and darkly tragic tale of a woman with a deep-seated and long-standing fear of emotional intimacy and the road she travels as she sublimates for that with increasingly wild sexual intimacy following the breakup of a long-term relationship.

This is a woman who reflects on the moments of her emotional withdrawal from her ex-boyfriend long before their breakup, who refuses to find out Mr. D.'s name or meet him in person, even after he asks, who freezes up and walks away from a swinger sex scene when she catches a glimpse of emotion between two of the characters, who withdraws and withholds from the man who genuinely loves her, and who royally bollockses up her relationship with him in the single most heinously stupid and cruel way at the most unforgivable time. Jo is one flawed, messed up character, and I thought that made both her and her story interesting...to a point.

Also surprising considering the flagrant sexuality, the narrative has a lovely tongue-in-cheek, naughty humor that flirts with, but doesn't cross over into raunchy. Jo, for all her flaws, is a funny girl, and through shifting points of view that include first person from her perspective, there are plenty of opportunities to be entertained by that alone. Patrick is also a very affable, quick-witted chap who is quite easy to love as he recovers from the dissolution of his marriage and starts falling for Jo.

For the first almost three-quarters of this book, I was drawn in and fascinated by the story. Even the parts that made me a little uncomfortable (e.g. the sex club) seemed more a portent of impending conflict and a reflection of Jo's intimacy issues than were in any way an annoyance. Then the book hit the seventy percent mark, Jo popped a whole bottle of Stupid pills, became an idiot, a liar, and a cheating whore with no redeeming traits whatsoever, and then boo-hoo'd her way into the record books as one of the most repugnant creatures I've ever had the misfortune to experience in fiction.

To make that craptastic pile of $h!t even worse, the story stopped making sense, dropped every single plot thread that could have provided some measure of understanding, lost what modicum of good taste it possessed, and careened into wretched, unforgivable melodramatic angst with all the enthusiasm of an alcoholic at an open bar.

You always write the most interesting reviews. More thoughtful and honest than most. I never tired of reading them.

*Chuckles*
Thanks, Julia. I appreciate that more than you know, especially as I've been debating toning down some of the explicit language. I've just never been incensed enough to do that before. Just thinking about the end of this book, though, even days after finishing it, still infuriates me.
As always, it's lovely hearing from you Julia!
~ Tracy

My bad - typo - caused by lack of sleep! I never tire of reading your reviews, good and bad and honestly, I find you quite generous in the ratings dept.!

Return to top of Tell Me More