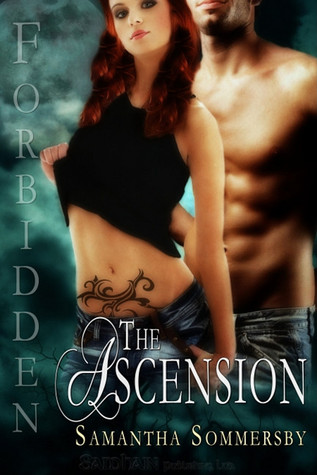 The second book in Samantha Sommersby's Forbidden series is quite a bit different than the first, The Sacrifice, even though it does further develop Sommersby's unique world and introduces us to more of the immortals in that world. In The Ascension we meet Byron Renfield, nearly four hundred year old vampire and treasurer of sorts to the powerful vampire elite, the Dominie. When a human woman shows up on Byron's island retreat during a deep mourning for the loss of his sister, Byron is instantly enthralled by her, falling in love with the scrappy American psychologist Violet Deeds almost immediately. But to love her, to claim her, breaks all the rules that Byron was ever taught as a member of the Dominie. Despite knowing that he gives up his immortality to have her, Byron can't stop himself from wanting, needing, and finally claiming the fiery beauty. That one bite, however, starts Byron and his mate on a path of redemption and renewal not just for them, but for the entire vampire race. The time for revolution is at hand.

Again written in first person POV with Byron as the narrator, I found him to be just as charming as Wes was in the previous novel, though perhaps lacking a bit in Wes' sardonic humor. There was still humor to be had, though, especially between Byron and his vampire consort and ex-lover Rita. This particular book was a bit odd in the way it flows, though. The first half deals almost exclusively with the abrupt and carnal beginning of the relationship between Ren (Byron) and Violet, reading more like romantica (erotic romance) with very flimsy narrative concerning world building and character development, in particular Violet's, and very explicit sexual narrative that encompassed most of the plot for the first half.

It isn't until Ren and Violet have relocated to America that the second half of the book starts to really pick up, and the overall arc of vampire revolution starts to really take hold. That, I believe, was for me the more appealing part of the book, but that's simply a personal preference instead of a complaint. I found the romance between Ren and Violet to be a bit rushed and perfunctory, and because that thread was so heavy in the first part of the book and not nearly as prevalent in the second, the two parts seemed a bit unbalanced to me.

That being said, it's a bit doubly disappointing because I really admire Sommersby's mythos here - I love the idea behind vampires and the religious dogma that has really stifled the whole race and left them suffering under the self serving rule of the ultimate narcissist, Cain. Yes, that Cain. The first vampire. While I have read other books that have offered up that possibility for the origins of the vampire race, I enjoyed how Sommersby did it here. The widening focus of the plot, the shift from romantica to revolution, became a fun, meaty read and I think this book really could've been truly exceptional had the two parts been more cohesively melded into one thorough story. As it was, the time it took to set up the relationship between Ren and Violet limited the amount of time dealing with the burgeoning revolution and that left me feeling a bit short changed.

What was there, though, was a nice read. I enjoyed getting to see Wes, Jennifer, Stanley, and Will again, and though I think I missed something between book one and book two of this series - maybe a short story published in an anthology that explained Jennifer and Stanley's marriage and their continued involvement in the paranormal? - I did end up enjoying this book a bit more than I expected to after the first few chapters. I look forward to continuing on with the series.

Return from The Ascension to Paranormal Romance Genre

Return from The Ascension to OGBDA Book Reviews Home