The Better Part of Darkness

Promising In Parts, But Messy 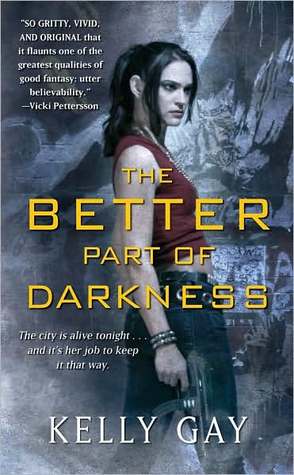 I give credit to Kelly Gay for an original world and a definite uniqueness to this debut urban fantasy series. Just about everything about the idea of underground Atlanta and the denizens of both dimensions were fascinating. And the concept for the story was also a winner. Integration Task Force detective Charlie Madigan has lived for thirteen years in a world that has acknowledged the existence of the inhabitants of two diametrically opposed worlds - Elysia, the "good" world full of happy shiny creatures, and Charbydon, far more hellish in nature with lots of darkworld jinn and nobles that bear striking resembles to vampires of a sort. The inhabitants from these two worlds have been visiting ours for millennium, and are the thread of truth in our mythological and perhaps theological past. The ITF that Charlie works for is sort of like the police force for the immigrants of those worlds. And all is not well in Atlanta when a drug called Ash is showing up on the street and in the private school that Charlie's own daughter attends. Finding out where it's coming from and who's responsible for it is the job of Charlie and her Siren partner Hank. But what they find could bring darkness like no other to their city and threaten the lives of human and otherworlder alike.

I wish that Gay had left the focus of this novel at the mystery of the deadly narcotic and the world-building for her series, because not long into The Better Part of Darkness, things go a bit awry. I think the author tried to do too much at once. The first major problem I had was the lead character, Charlie. Eight months ago she was beaten to death and resurrected. But she came back wrong somehow, and hasn't slept much since. And things just keep getting stranger and stranger with her, as her ex-husband starts coming around again and she's hit by unreasonable rages, inhuman strength, and the freaky new healing ability. She's got a daughter she loves immensely, and ex-husband she loves but can't trust, after his addiction to the same dark magics that killed her twin brother years ago. She's also got a sister she tries to protect and a partner she loves like a dear friend - and she's told no one of the turmoil she's carrying around since the night she died.

She's the sort of stoic, carries-all-the-load-herself sort that can become very frustrating very quickly, when that character stubbornly refuses to admit that she can't take on the world singlehandedly. And emotionally, she's all over the map. She's got hot lusty thoughts about ex-hubby...but is mortified to an almost puritanical degree to go into an Elysian bathhouse. She's spent the years since the death of her twin walling off her emotions to do the job of protecting her sister, then her daughter, but with a few short comments by her sister reevaluates her entire life. Wants to knock around anything or anyone who gets in her face and mouths off when discretion is the better part of valor, but gets paralyzed by fear more than once in less threatening situations. She's a mess, really, and I didn't see her as kick-ass as I'd heard her described for the first 3/4 of the book. Something happens towards the end that does push her into the realm of kick-ass heroine, but up until then she was way too self involved and wishy-washy.

There were also some plot holes, conflicting developments, a lot of weird random character encounters (the lab rat? Shameless and heavy-handed set up for the second book), too many two dimensional secondary characters (her partner Hank and sister Bryn in particular should've been fleshed out more), and too many unresolved issues at the end for me to rate this read higher. And I still don't fully understand what the drug Ash had to do with the rest of the goings on with the major baddie in the book. On the bright side, it was a reasonably engaging read that kept my attention, and while ultimately I think I'll probably check out the second book when it comes out, I don't think I'll read more than two if that one is as messy as this one and without some major character development for Charlie and the rest.

Return from The Better Part of Darkness to Urban Fantasy Genre