The Bite Before Christmas 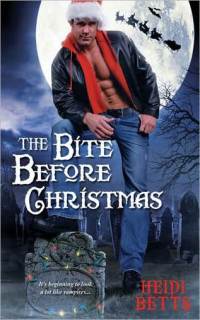 All I Vant for Christmas

Connor Drake's deepest holiday wish is an old fashioned Christmas the likes of which he fondly remembers from his humanity, full of family and love. His reluctant and recalcitrant younger brother and sister, however, can hardly be bothered. As a favor for her good friend, vampire matchmaker Angelina Ricci sends him Jillian Parker, a young...and human...event coordinator starting to make a name for herself. Jillian understands intellectually that vampires aren't the bloodthirsty monsters of books and movies, but working for one, being in his house, makes her decidedly nervous...the fact that Connor is gorgeous, intelligent, kind, and gorgeous (it bears repeating), makes her feel something else entirely.

With Jillian, Connor may get a much happier holiday than he'd ever dreamed, but only if the young woman can become comfortable with his vampire nature.

A Vampire in Her Stocking

Vampire Vivian Harrison is heartbroken when her boss Sean Spicer tells her he's dying. She's been in love with him for years. The announcement spurs her into wild waters and before she knows it, she and Sean have shared a single desperate moment of passion. The gaping loss following their time together threatens to crush her, until one evening, an unconscious and bow-wrapped Sean Spicer shows up on her couch, sporting a couple of fang marks on his neck and a new undead status...with a card from best friend Angelina Ricci, matchmaker and meddler, wishing her a Merry Christmas.

He never knew she was a vampire; she had no doubt he didn't want to be one. He may be the best present she's ever received, but Vivian has no illusions that Sean will have any interest in decking her halls when he finds out what's happened to him.

It's a Wonderful Bite

Despite the holiday cheer and comfortable life, despite the love of her long time lover Ian, matchmaker Angelina Ricci felt a yearning for more, for the tinsel on the tree, so to speak. As friends around her have found their mates (thanks to her), she feels an odd sort of need to have Ian take their relationship to a new level. But the vampire cop isn't exactly a hearts and romance sort of guy, and he's got no use for human traditions like marriage.

Waking up on Christmas morning is a shock, though, when Angelina realizes that she's stuck in a nightmare. She's human, and so is Ian. They're partners...but not in life. They're cop partners and Ian is married with children - he's someone else's husband, someone else's father. She's his lover on the side. And from all indications, that was her own fault. When their job...and she shudders at the thought...puts Ian's life in the gravest danger at the fangs of a group of rogue vampires, Angelina has to rely on skills limited by her human shell to save them both. Hoping all the while that the horrific nightmare will soon be over.

These three heartwarming and solid novellas are loosely connected through the character of Angelina Ricci, and Heidi Betts has done a good job instilling her romances with holiday warmth and a sensual heat. Betts is deft with character definition and does reasonably well providing three complete, satisfying stories with a limiting length. None are terribly complex in plot, nor are the characters overly complicated, but they don't have to be to be lightly entertaining and romantic.

The second title, A Vampire in Her Stocking, was my least favorite of the three. I didn't like the beginning and it took me a long time to warm up to Vivian, who I found to be a bit whiney and drippy, and Sean, who I thought was a bit thoughtless in his treatment of Vivian. Still, it was the first title, All I Vant for Christmas, that I felt was the least complete within its own pages, ending rather abruptly with several questions and plot threads dangling, though there were some very pleasing resolution and wrap up provided in exposition in the final story.

I enjoyed this set of holiday PNR romances. Each story had a very unique flavor and the plots were different enough to provide genuine variety, even with the thread of loose connection through them all. Overall, I found myself impressed with Betts, who I'd not read before, and interested in what she could create within the broader scope of a full length novel. She showed off a nice talent for plot creation and pacing, smooth narrative, sensual romance, and heated sexuality that would really shine in a longer-length format.

Return from The Bite Before Christmas to Paranormal Romance Genre

Return from The Bite Before Christmas to OGBDA Book Reviews Home