Darker Than I Was Expecting 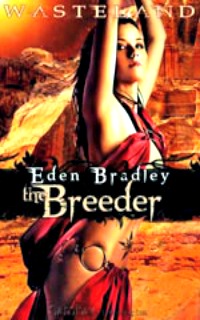 By now the world of Wasteland, a post-apocalyptic earth over 100 years after solar flares in 2012 decimated life on the planet, is at least familiar, if not particularly a fun vacation spot. In fact, this bleak, desolate world is a shattering backdrop for the four novellas by four authors that feature and highlight the four different caste systems that are left for women in that world. Eden Bradley assumes the mantel for the third book and offers us Nitara's story. Born of a Breeder, she has been chosen by her goddess to follow the same path, and educated on all things sensual and sexual from a very young age. She anxiously awaits her ceremony of the sacrifice, where she will ascend to an alter and take her first male, abandoning her virginity and offering her body for reproduction.

There's just one teeny tiny little problem. After copulating with the male sacrifice, she will then plunge a dagger into his heart and bathe herself in his blood as entreaty to the goddess for her fertility. For years she's been groomed for and wildly anticipating that day, until a flash of intellect and fear in a fellow novitiate's sacrifice just prior to her own causes her to wonder if the sacrifices are quite the mindless animals she's always been led to believe.

Akaash, the Wanderer stolen from his people and his bonded lover Dhatri, is quite certain he's no mindless animal. He's being chained and kept drugged and isolated but for visits from Nitara that are for the purpose of inflaming his sexual need to the point of nearly willing sacrifice and its wreaking hell on his heart and mind. He is broken over the loss of his freedom and his lover, resentful of his impending death and under no illusions about life. He is also drawn to Nitara, despite knowing she is his doom, and the month-long preparation becomes time for them to share their minds and hearts as well as what limited abilities they have to share bodies. Can Nitara can save them both from the heinous crime against humanity that approaches? Will she dare? She is his only hope.

I have to say, I have no complaints with the narrative and development of plot with this novella. It was considerably more fleshed out in both character and conflict than the previous entry, The Whore by Lilli Feisty. I have, however, a significant problem with this particular novella that hearkens to my reason for reading erotic fiction to begin with. Obviously the best of the bunch offer a solid story with likable characters and, for my personal tastes, a happy ending along with smoking sex scenes that titillate and arouse. Well, in The Breeder, the sex was hot, and there was plenty of it, alternating from self satisfaction to M/F to M/M/F, and I had no complaint about that, but here's the thing...it's really hard for me to enjoy an erotica novella that starts out with the brutal slaughter of a man followed by the murderess slathering her body with his still hot blood. Call me crazy, but that's not quite the sensual, sexual image that fosters a lot of yummy feelings, and it does nothing to endear me to the world in general and the story in particular. While the first two books also paint a grim picture of the world of Wasteland and a somber view of the decline of the human race, they also offer something that this one didn't quite manage to pull off...hope. I don't think I'll be spoiling too many people if I say that yes, there is a "happy" ending in this novella. That's assumed going in. But what continues to bother me is that it's "happy" only for the three main characters, Nitara, Akaash, and Dhatri. It's less happy for the victims-in-waiting of the next sacrifice, or Nitara's twin brother, castrated as a child and forced into servitude of the novitiates because their mother ran off with a Wanderer years ago. Without the hope for a brighter future for all, this novella left me feeling way too disturbed and focused on the bad big picture, not on the eroticism of the three leads. Nor did I think that the emotional connection between Nitara and Akaash, and then Dhatri, was sufficiently explored or developed to help keep the focus off the grim reality. Erotic romance is supposed to be erotic and romantic, and unfortunately, due to the circumstances, for me, this one just wasn't, regardless of how well written it was.

Return from The Breeder to Genres

Return from The Breeder to OGBDA Book Reviews Home