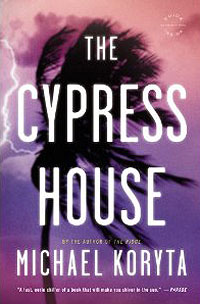 Disclosure: An ARC of this book was provided to me by Little, Brown, and Company via NetGalley. This rating, review, and all included thoughts and comments are my own.

Arlen Wagner is content with his life. A taciturn man, he spends his days as a construction laborer with the CCC, the Civilian Conservation Corps, and instructing young boys in the trade. Given the deepening woes of The Great Depression, he was just happy to be working. Now he's on a train with his young friend Paul Brickhill, heading to a camp in the Florida Keys to work on building a roadway that will connect the Keys to the mainland and each other.

Problem is, for all that Arlen is a content, taciturn man, he's by no means a normal man. Arlen sees dead people. Before they're dead. So when he opens his eyes after a brief rest and sees a skeletal hand holding the cards of a card player in the next aisle, his stomach clenches. The agony of fear, though, doesn't sink in until he looks around and realizes everyone on the train is doomed. Some are skeletal, some have the smoke of death in place of their eyes, but it all means one thing. Everyone in that train car is going to die.

As much as he tries, he can only convince Paul not to re-board the train after a brief stop. The rest taunt him for his fears and leave the two men in an abandoned station in the middle of the hot, sticky state's east coast. Arlen knows is that he saved Paul's life. Saved his own life. That is fact. But seeing death's prelude doesn't mean he had the first clue what was waiting for them when they accepted a ride from a stranger, when they traveled from east to west across a flat but wild landscape, when they end up at the Cypress House.

Not even a man who sees death coming could possibly be prepared for the Cypress House. A house of death.

I didn't know quite what I was getting into when I started Koryta's The Cypress House. I thought it was a horror novel, actually, and the horror was surrounding the house. I suppose, in a way, that's not too far from the truth, yet it doesn't come close to encompassing the full nature of this complex, grim, and bitterly poignant tale. Set on the west central coast of Florida in 1935, in an era when the country is crippled by the depression, Kortya's sparsely stylized narrative mirrors the sense of hopelessness and despair that must have been felt by so many of the time.

To me, the story seems more akin to a supernatural thriller than horror. It's definitely not the sort of book I normally read, nor is it one I thought I'd be able to fully enjoy. I am not usually a fan of depression-era fiction (or period pieces of any historical time, really). Imagine my surprise when I found myself utterly and completely captivated by the characters, writing style, and story before I even got finished with the first chapter. By the end I was left feeling...deeply affected...by this compelling tale and damned glad I gave it a chance.

Arlen is a character that represents the less-is-more philosophy. He didn't say all that much, certainly didn't emote all that much, and I kept picturing him as Viggo Mortensen or a young Clint Eastwood while I was reading. Contained power, damaged by life, capable, unbreakable...like a craggy rock with a stained soul, he was, to me, a very poetic character. Noble, in an era when nobility certainly didn't pay, loyal and protective, which certainly earned no more. Flawed, for sure, and completely sympathetic for the very fact that he expects no sympathy. Arlen Wagner, in fact, expects nothing.

Paul was the lively one, the energetic and sometimes naive and hopeful one. Brilliant, but goofy with it. Idealistic and unbeaten by life, untried by life, he was an odd companion for Arlen, yet he was also the perfect compliment to the quietly intense man.

I don't want to expound on the story too much, other than to say it was gripping. Depressing at times, action-packed at others, it was a grim tale of corruption, lawlessness, and greed, and the power those can guarantee. But it was also about hope and even love, fighting against tyranny and oppression, making a stand. I thought the pacing through most of the book was fantastic. There was just a few places in the middle, before the full scope of the plot was revealed and so many secrets were still being kept, that I felt dragged a little. There were some gut-wrenching scenes, and there certainly weren't many that weren't tension-filled, and the brilliance of the story and the intense atmosphere never waned.

Kortya spans a wide range of human circumstance here and does it with a flawless realism that swept me up and chilled me to the core. In the end, though, I think I'll remember The Cypress House as a story about an ordinary man with an extraordinary ability, a quiet man who accepts life exactly as it is and calmly shoulders on...right up until a line is crossed, until he realizes that some wars do need to be waged. Some battles can't - and shouldn't be - avoided. Some things, some people, in fact, are worth more than fighting for, they're worth dying for. It was a fantastic read with great characters, and I highly recommend it to fans of supernatural thrillers, even if the historic time period isn't your thing. This one's worth it.

Return to top of The Cypress House