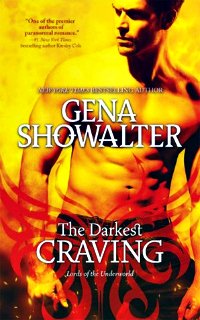 Series:   Lords of the Underworld, Book 10

Disclosure:   A copy of this book was provided to me by the Amazon Vine program.

Kane has always been a walking disaster. Literally. The Lord houses Disaster, a particularly vile demon that revels in making Kane's life hell. Then Kane actually ended up in hell, suffering horrible torture and rape for weeks on end until he was rescued by a strange female with one particularly odd request for her assistance. She wants him to kill her.

Still lost in darkness from his ordeal, wrecked in a way he's having a hard time dealing with, one thing is absolutely clear to Kane. He's not killing the feisty, adorable half-fae Josephina Aisling. He's going to rescue her instead.

Then he's going to finally kill the demon inside him. Even if he has to die to do it.

I feel oddly ambivalent about this tenth installment of the Lords of the Underworld series. After Paris' book, which gave readers some much-needed resolution to the nagging problems of the Hunters and Cronus and Rhea, I figured this one would have to be a transitional book. Transitional books tend to not be my favorite books in a series for a lot of reasons, but I've always felt they were a necessary evil and dealt accordingly.

Had this book actually offered some transitional series arc plot development or given any attention to the lingering issues generated by the big battle that ended the previous book, I think I would have been fine with this one in that role. My problem is that it really didn't. In fact, Kane and Josephina's story didn't do much of anything to establish a new, Hunter/Cronus-free direction for the Lords and their allies for the series, nor did it do much to progress the plot line about the hunt for Pandora's box - though that did receive a bit of attention with the kick off of Cameo's story threads and the return of a character I was really hoping to see again in this series.

As for the romance, that didn't really wow me with character or relationship evolution, either.

I like Kane. I've always felt bad for the guy (pretty much the standard for the pre-mated Lords), even when he served as little more than comic relief at the start of the series. It was nice getting a closer look at how he deals with Disaster. I also enjoyed Disaster being given a far more sinister presence than the demons of the other Lords have been given. Disaster just seemed more actively evil than some of the others have been. Not a bad thing, either. I liked it.

We've had a couple of books now, seeing Kane's story unfold, and much of that was pretty horrifying, so I also liked that he got some happiness. What he didn't get, what none of the characters in this series get much of lately, is character depth and complexity or realistic character evolution, and that, along with my issues with the stories themselves, is bothering me a lot in this series.

Yes, Kane is tormented by his time in hell, and rightly so, but that seems to be the sole defining element of his character, and that's just not enough to make him well-rounded and realistic to me. Josephina, maybe because she's new to the series, got a bit more character definition, and I liked her more for that, but again, her role in her family was her defining characteristic and there wasn't a huge amount of depth to her beyond that.

But depth of character and complexity of internal and external conflict have never really been something this series has really offered, and I'm just now starting to remember that. Hellaciously sexy times, yes. Action and adventure, even breath-stealing emotion, yes. Summer-blockbuster-movie amounts of fierce battles and wicked villains, sure. And like those summer blockbusters, not a whole lot of coherent, well-written story surrounding it all.

On a brighter note, I thought the beginning of this book was awesome. I loved when Josephina tried to get Kane to keep his end of the bargain, then turned to Lucien and Sabin when they showed up. I love the idea that the fae were huge fans of the Lords, whose antics they follow as rabidly as the paparazzi dog the Kardashians. I loved Cameo's cameos and Torin's plague-filled drama. And there was other stuff that I truly enjoyed as well.

Kane and Josephina's extended time in the fae world didn't add to the fun. It bored me. And they seemed to spend an awfully long time there, because this was an awfully long book. That's a lot of boredom. Boredom mixed with perplexity, because for the two previous books in this series, several critical things were brewing relating to Kane's fate and the fate of the world, and those threads were just butchered in this book, with no justification or supporting development.

Kane was supposed to start an apocalypse...marry one of the Horseman or the woman who housed Irresponsibility. Or both. Josephina had nothing at all to do with one of those fateful threads and Irresponsiblity had almost nothing to do with the other. Not in anything but a completely transitory way. So what was the point of even having those threads in the previous two books if you're just going to pull in some extremely tenuous threads of suspect connection to go around all of it?

Not deal with it, mind you, completely go around it. Two very different things.

None of that worked for me at all, and all of it, including several threads of resolution, seemed way too convenient and contrived. And the end of the book, with the resolution, was all too typical of Showalter in this series. Completely unsupported by previous development and utterly abrupt. Not to mention repetitive. Seriously, how many books (out of 10) have had an angel (who I guess we're calling Sent Ones now) step in at the critical moment in the climax to flick his wings (or, you know...fiery sword...whatever) to solve all the problems for the main characters and expedite the HEA? More than once is too many. Three times is appalling.

And one other thing: I loathe the, "Oops, I was wrong," explanation to force feed a conflict resolution and fast track an HEA and Showalter uses it All. The. Time. Call it a deus ex machina, a plot contrivance, or whatever, it's that moment when you're reading a story that's been written into a very clearly defined corner only to have the author decide the room is really round so the problem is solved. Argh! Drives me absolutely bat-shit crazy.

The one at the end of this book was particularly heinous, too.

There are just too many things going wrong for me with this series lately, so many that I'm starting to wonder if the two year hiatus I took from the series between Amun's and Strider's books was, in fact, long enough. I'm starting to think it wasn't.

Return from The Darkest Craving to Paranormal Romance

Return from The Darkest Craving to One Good Book Home