Has Some Highs and Lows 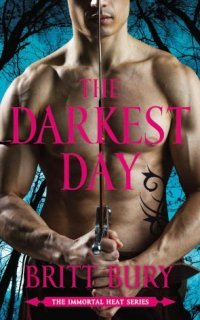 Disclosure:   An ARC of this book was provided to me by Forever Yours publisher Grand Central Publishing via NetGalley. This rating, review, and all included thoughts and comments are my own.

You think you've got it rough? Try being Izel Campbell, the only firstborn Campbell born female. She's the McCall, "Son" of the Battle Chief, but she's a Poet Fionn, not a Warrior like her father was before her. She's also lived her twenty-five years of life without feeling one single emotion. Ever.

She's flown a couple of thousand miles to Scotland on the vague hope her very powerful grandfather can help fix her. She found his home, which is great, but he's not there, which isn't. Bigger problem, someone else is.

That someone is Battle Chief of the Kerr clan, immortal Pookah warrior Kelvin Kerr. A tall, gorgeous male who for some reason has every intention of removing her head from her shoulders, though from what he says, he feels really bad about it. Because that's a consolation.

Before he has a chance to behead her, Izel is plunged into hell, and all those emotions she has never felt crash into her at the same time. Terror. Sorrow. Anger. Helplessness. Combined they become a physical agony she doesn't understand and has no ability to process.

Kelvin has no idea what's happening to the woman he's sworn to kill, but suddenly he feels her pain and watches as she changes right in front of him. The lass suddenly lights up his senses like nothing he's ever felt before and two things become painfully clear. The first, she's his fated female, but he doesn't want to think about that. Especially as the second thing eclipses everything else.

Izel Campbell is mortal. A full human. As her species was thought to have become extinct decades ago, she's also the only human.

With that inconceivable revelation, Kelvin's goal changes. In the shadow of a prophecy he doesn't fully understand, he can no longer kill the Campbell as he's sworn to do. He has to protect the last human against a world of beings who will want to eat her and deliver her to a destiny he doesn't know if she'll survive.

Some reviews are just harder to write than others, and this is one of those hard ones. Bury's debut has a lot of good points. I loved the concept for the series. There were a few elements that reminded me of Kresley Cole's Immortals After Dark series, but it has enough individuality and uniqueness to stand on its own merits. I also loved the idea of humanity being extinct...or mostly extinct...and the world being home to all the things that go bump (and apparently bump-and-grind) in the night.

Yeah, that's probably me just being twisted or some such psychobabble. What can I say? I'm over humanity being the go-to species for fictional focus.

The writing was another plus for me in this debut. Bury has a gift for quip-laden humor and snappy comebacks. I enjoyed Izel and Kelvin most when they were sniping at each other, or when their sardonic inner thoughts practically dripped disdain. I wouldn't say there was a large amount of humor in the book, but there was enough snark sprinkled throughout to entertain me.

I had some problems with the plot, though, and a couple of the story elements hit up against some of my personal preferences in reading. I wish the world had been better explained or fleshed out more. It felt like I was getting a lot of terminology, but not a clear understanding of what the words meant and how they fit into the world. That made reading the book feel a little like looking through a telescope; I could see and understand what was going on where I was looking, but out of my direct field of vision, everything was still a murky black.

The beginning of the book was one of the two largest stumbling blocks for me, story-wise. So much happens just as we meet Izel and Kelvin that the first quarter of the book was a bit of a chaotic jumble for me, and some things poked at my reading preferences. I'm a little tired of the fated mate trope. I've read it done well, I've read it done poorly, but my biggest issue is that I've just read it too often. It wasn't done badly in this book. In fact, I liked that Kelvin avoided thinking about it as much as possible and wasn't too keen on the idea. I'm just tired of it being used at all.

More of a disappointment were some of Izel's points of character. When we meet Izel she's a relatively plain-looking, unprepossessing female who hasn't come into her "power" yet. Before we even get to shake her metaphorical hand, she becomes the most important find on the planet, the last of her kind, and a prophesied Major Power in a coming confrontation. If that's not enough, she also goes from being average looking to stunningly, heart-stoppingly gorgeous. And she's a virgin. Of course.

The characters and story do settle and start to mesh as the book progresses, but a little too much of the plot stays focused on the romance threads. I would have appreciated a comprehensive and layered plot-driven conflict to add depth and dimension to the read. I also would have enjoyed more page time for the secondary characters, because they were a couple who were truly bright spots in the book. I couldn't possibly have loved Ryo the witch more than I did, and the Fionn warrior Ramsey was sorely underused.

There were, however, a sequence of scenes in the second half of the book that didn't work for me on any level and seemed to so contradict what readers had learned about the main characters and the evolution of their relationship to that point that the whole of it struck me as one horribly egregious plot contrivance. So much so that I was genuinely annoyed by everyone and everything in the book for several of the subsequent chapters and it colored my overall impression of the book.

Without a doubt I believe there is a foundation for a strong and imaginative series here, and several characters with a huge amount of likability have some great story potential. There just weren't quite enough good points in this particular book to fully countermand my dislike of the things that failed for me personally. I would love to see where Bury takes the series, though, because with a few different characters and a few different elements here and there, this series could really rock my world.

"Don't flatter yourself. I basically prefer your company over death. Well, that and-" she tapped her chin and looked to the sky- "nope, just death."

She was not stomping away and throwing a fit like a five-year-old. She just happened to enjoy pounding her feet on the ground while she walked, that's all.

"The McCall title was given to describe one with a unique heart and great power. It was you all who thought that the only powerful creature must be male."

Return from The Darkest Day to Paranormal Romance Genre

Return from The Darkest Day to OGBDA Book Reviews Home