An Emotional Read ~ A Couple of Caveats 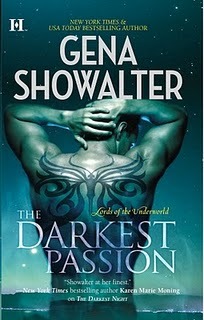 Series:   Lords of the Underworld, Book 5

For weeks Aeron has felt the eyes of an angel watching nearly his every move. For weeks he's had to deal with the periodic loss of his beloved Legion as she flees to hell to escape the pain of purity. He's getting downright sick of it and is more than ready for the angel to show itself so he can express that displeasure on the warrior of heaven itself. Instead of a battle, however, Aeron ends up with a stumbling, bleeding, wingless female who has been horribly tortured by demons. An enchanting female who cries out his name, begging for assistance and shelter. A gorgeous female oddly fascinated by sex, so long as it's with Aeron. A female angel who desperately clawed her way out of hell to try to reach him after the decision to spare his life made her fall from heaven.

But it doesn't matter to Aeron how beguiling the female is, or how her cries and desire for him tingle his skin...and other parts. He is Wrath (uh...why is his demon purring?). He is strength of will incarnate (um...how can she make eating fruit THAT thrilling??). He is stoic...unmoved by her pleas, her pain, her need (She's his. His! His!!). He is...

I love the Lords, I love the series, and I love Showalter! When it comes to sheer emotional impact, this book is a heavy hitter. I laughed, I teared up (okay...maybe I cried like a baby...but don't tell anyone!), I cheered and I raged and I cringed. On a strictly emotional level, The Darkest Passion, fifth book in the Lords of the Underworld series, was ultimately satisfying.

I'm continually impressed by the deepening and broadening mythos in this series and the evolution of these often cursed and flawed characters. Showalter started to add layers to her plots a couple of books ago, pairing the evolution of the romantic pair with additional development of the other Lords in their ongoing and intensifying crisis with Galen and the Hunters, and I think that has added complexity to this paranormal romance series, elevating it to a whole other level. The imagination, skill, and dedication to this world she's created is truly amazing to experience.

About those caveats, though... I have to admit, it took me about 20% of the book to even start to warm up to Olivia, and I wasn't horribly fond of Aeron at first either. My issues with Aeron quickly evaporated and I was thoroughly drawn into his character. I ended up loving him. For the first time, too, I was utterly enchanted with a Lord's demon. I thought Wrath was great...in a fuzzy bunny with a major jones for chaos sort of way, but still!

The dichotomy in Aeron, the yearning family man hidden behind the warrior with an overabundance of guilt and an overdeveloped sense of duty, is very appealing. I felt for his pain and his guilt over the sense of pleasure he gets from letting Wrath have his way. I found him to be sympathetic and adorable and strong and proud. I wasn't so fond of Olivia. She grew on me, yes, so by the end, I didn't dislike her, but I had no real affection for her either. There were times she made me chuckle, though, and her thirst for sexual empowerment was cute.

I think the relationship between Aeron and Olivia was at times overwhelmed by the goings on of the rest of the Lords. While I appreciate those plot layers, I think perhaps in this book there may have been one or two more than necessary, and the romance between Aeron and Olivia suffered because of it. I never really felt like they got a chance to really know and like each other as people. I have no complaints about the development of their sexual relationship, but again, had there been more allotted to their emotional development, I think I would have found that to be even more satisfying as well.

The transitions in the narrative between Aeron's and Olivia's scenes and the rest of the Lords was very abrupt and sharply delineated, and while that's not a criticism, it left me feeling like Aeron wasn't involved in what was going on with the Hunters, the search for the new group of Lords, and the artifacts. That's a shame, because had he and Olivia been included in those plot threads, it may have allowed for more of Olivia's character development and the development of the relationship between she and Aeron. Also in this book, there were a couple of unanswered questions (how DID Aeron feel Olivia's presence before she fell?) that were specifically mentioned but never resolved.

All that being said, I really only have one major complaint with this story: the ending. For the second time in a row, I felt the ending of a book in this series was a letdown, and I had a major problem with the final scene. I do not want to give spoilers, and so it's hard to really provide detail, but I will say this, I understand the sacrifice and the reward, but I wish it had been realized differently and instead of being told what happened and what was going to happen, I would have preferred having it written out (in fact, too many things through the whole of this book were told instead of shown, information being handed out like beads at Mardi Gras by angels and unspeakables and everyone else, but I digress). Because of the way the final scene played out it felt very abrupt and unsatisfying - one aspect in particular flat out broke my heart.

One technical/formatting issue: I read on Kindle so I don't know if this carried over to print format, but the parts of the narrative that include text messaging between Lords was not formatted to differentiate narrative from text messaging dialogue and it made it very difficult to figure out what was being "said" between characters and what wasn't. Frankly, I'm still not sure after several rereads of those parts.

Awesome twist in the mythos at the end, though. The potential is thrilling but the journey to that potential heartbreakingly poignant. Damn Showalter for being SO good at making me feel for her characters, because there were points in this book that just destroyed me. Even with the issues and criticisms, this book moved me and I really, really liked it. Her characters made me feel deeply for them and I can't wait for more.

Return from The Darkest Passion to Paranormal Romance

Return from The Darkest Passion to One Good Book Home