Finally...In More Ways than One 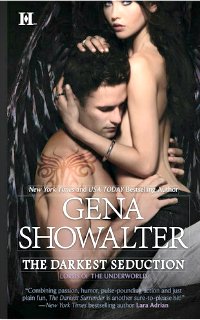 Series:   Lords of the Underworld, Book 9

He is the maestro of the hit-it-and-quit-it. Possessed by the demon Promiscuity, Paris is doomed to have sex with a new partner every day. Sound like a frat boy's idea of heaven? Try thousands of years of having to feed a sex demon every day or risk death. Of never being able to sleep with the same person twice, never having a relationship, never loving anyone or being faithful to anyone who loves you. And if you try to hold out, try to abstain, the demon you house strips away the final strands of your meager control so the sex is no longer your choice, let alone the partner with which you have it.

Sienna was human and a Hunter, the group intent on destroying the Lords. Paris was captured by her once, slept with her once, and for the first time in his centuries-long existence, once was not enough. His body responded to her again. It was everything he ever wanted and nothing he ever dreamed could happen.

Of course, she was his mortal enemy...and then she died...but what's a little death between a sex demon-possessed Lord and his only hope for salvation?

Paris has been tirelessly searching for Sienna ever since. And he finally knows where she is. He has been working his way to her side no matter what it has taken, or who he has had to sleep with...or kill to find her. He'll worry about whether or not she still hates him, or blames him for her death, or still wants to kill him, when he gets there.

Finally! It took a few too many books spread out over I don't even know how many years, but I finally feel like there was some pretty significant progress made in the Lords vs. Hunters/Titans, et al series plot. The sort of progress, in fact, that could alter the direction of the series from this point forward and provide for even greater potential catastrophe for the beloved Lords. The lack of that progress has long been a complaint of mine in this series, so I have to admit, I'm pretty happy that I don't have that problem this time.

Oh, yeah, and Paris finally gets some Happily in his Ever After, too.

I had reached the end of the line with Paris in the previous book, my well of sympathy for him had run dry, so I was a little uncertain how this book would play out for me. Showalter did a lot of good things in here with Paris and Sienna. A lot of good things. Was it enough to completely redeem Paris for me? Not totally, unfortunately, and I still have some lingering questions about the ambrosia issue given what Cronus did to Sienna, not to mention Paris' double dose of demon issue, but I was mostly able to set aside any lingering discomfort with his character and appreciate the story that was being told.

And there was a lot of story being told in this book. Maybe even a little too much, as I had been hoping for a bit more depth and dimension in the relationship between Sienna and Paris and a little less focus on everything else that tends to creep into each book. Something more like what Sabin and Kaia had in their book. Sadly, that didn't happen. Paris and Sienna didn't even share a scene until I was deep into the book and the evolution of their relationship was a little truncated for my tastes, with some less than pleasant - even perplexing, at times - elements, but at the very least it got the job done.

Sienna also wasn't quite as strong a heroine as I prefer. Kaia was a much nicer fit for my tastes in that regard, but I did like Sienna, and she was extremely understanding and gracious when it came to Paris' past. On that front I was satisfied, because Paris needed someone who could accept his past without letting it color their relationship. It takes a very special sort of person to be able to do that, and Sienna was that person.

She was just a little too good to be true, even though she's been housing Wrath for a while now. She's still naive and a bit innocent, and just a shade too decent for me, despite everything she's been through. She does have a big heart, though, and she had a strength of will and determination that I enjoyed, most notably when she's struggling to resist Cronus' myriad manipulations.

And Showalter broke my heart a little with Sienna's sister. That was damn tragic.

This was a bit of a darker book than its predecessor, and there was less humor in it. I like the humor, so that was a bummer, but the darker elements did fit with the downward spiral Paris has been on, so it maintained an organic feel. And the story also answered a question I've been wondering for years, so that was a bonus.

I can't say this was a be-all-end-all read for me, and the sheer bulk of the story was the largest problem. By this point in the series, there's just so much going on with so many different characters that giving each sufficient attention bogs down the story's pacing quite a bit. I don't know that I needed...or particularly cared for...Narcissism's introduction and the views we get from her point of view. Nor did I need quite so much time spent with Kane.

I can't help but wish Showalter would focus more on the featured characters and their relationships in their own books, because though we've known Paris and Sienna for quite some time in the series, there was a lot of room to add character depth and relationship evolution that was spent on highlighting other things. I know how important it is to weave several different elements into each book, but I think the romance arc lost out some in this one.

No doubt, though, the series is still going strong, and there are many positives that have reawakened my interest and investment in the Lords. Paris's book isn't a series favorite of mine, but it was a long time coming and I'm glad he finally got some peace and found the woman he loves. Though...she's still dead...and I'm not completely sure how that's going to play out given how the story ends. I guess I'll find out.

Return from The Darkest Seduction to Paranormal Romance

Return from The Darkest Seduction to One Good Book Home