Not Much Hunt In This One 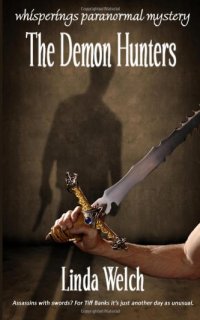 Tiff Banks is back to the business of listening to the whispers of the violently slain dead in this sequel to one of my favorite novellas, Along Came A Demon. Months after the events of that book, Tiff and her Gelpha partner and lover Royal have both drifted away from their jobs with the police and started their own private investigation firm, finding stolen fuzzballs for ludicrous rewards (which always make Tiff happy) and enjoying their growing relationship. Nothing good ever lasts, however, and soon Tiff is embroiled in a case Royal took behind her back for clients that, quite frankly, terrify Tiff, as she has no idea what they are beyond being really fricking scary. They're not demons (Gelpha), but they sure as heck aren't human either, and no amount of questioning can get Royal to tell Tiff what's going on. His odd behavior is putting their relationship on rocky ground, and the combination of a missing person case and Royal's actions are threatening to crumble everything good they have.

When a package arrives at Tiff's house, the contents send her into another direction, one seemingly unconnected to Royal's case. Feeling a bit spiteful, Tiff keeps Royal out of the loop on the handwritten journal she received and the story it contains. Soon secrets are being revealed and murders are piling up, and these clients of theirs, Gia and Daven, creatures Gelpha call the Dark Cousins, are neck deep in everything. Tiff just can't figure out why...but she will. Even if it kills her.

I am a huge fan of Along Came a Demon and I can't tell you how much I was looking forward to this sequel. I can tell you how disappointed I was by it and why, though. I am honestly perplexed as to what happened in this book. Unlike its predecessor, The Demon Hunters is plagued by an inconsistent plot full of holes and tenuous connections, a plethora of questions that go unanswered and an ill defined resolution that was abrupt and succinct to the point of confusion. I had mentioned in my review of Along Came A Demon that I felt that resolution was also oddly abrupt, but I credited that to the constraints of a novella length story. Now I'm not so sure.

There was so much that just seemed wrong, but I'll try to hit on the highlights. The opening chapters that cover the exposition of the story while sending Tiff and Royal out on a cat caper were in a lighthearted tone that matched the previous book in the series, but other than a few scenes with Tiff's ghostly roommates, the rest of the book is much darker and far more serious. So much so that it felt like they could have been in separate books. The mystery of just what Gia and Daven are is interesting to start, but unrewarding and frustrating by the end. I'm firmly in the camp of "if it walks like a vampire and talks like a vampire..." but Tiff was quite adamant in willfully not entertaining even the possibility, which didn't make any sense to me. She sees dead people and her lover is a being from an alternate universe. At some point you think she'd cotton to the idea that there are more things in heaven and earth, Horatio... But she doesn't, and it's unrewarding.

I'm still not fond of how the relationship between Tiff and Royal is written - that's another constant from the first book. There just isn't anything there to read, really, and readers are just sort of told they're together and it's wonderful...then it's not...then it's okay...then it's up in the air...with no real connection or any development to transition from stage to stage. Frankly, I'd prefer that the relationship aspect be dropped completely if it's going to be so anemic in each story, though I have to admit, I'm not a large fan of Royal and don't think he's been particularly well defined. The ghosts get more attention in both books than he does.

As to the plot itself, once you strip away the threads of what the Dark Cousins are, it becomes a sort of uninteresting murder mystery and the pieces seemed really disjointed to me. I just think their could have been ways to go about solving the case to make it more interesting, but as it was written, it just wasn't. Again, though, the frustration seeped in when the head honcho responsible for all the badness was so obviously on a vampire vendetta and yet, no mention of the possibility of vampires existing...even if they're like demons (Gelpha) to Tiff - something she'd call vampires, though she knows they're really a different race altogether. I can appreciate the author trying to stay away from the overwritten vampire genre, and to make a stylistic decision to keep vampires out of her books, if that's what she did, but to ignore the concept and idea altogether just started to smack of stubborn ignorance after a time, and that's not attractive in characters.

The absolute best part of the book, though, was also the most confusing. After Tiff gets the journal of a young British girl on an expedition in Burma in 1887, she starts to read it - and that's where this book totally shines. Elizabeth's adventure was gripping, interesting, fascinating, and extraordinarily well written. I loved every word of her journal. The bad news is that the connection between the journal and the case is so flimsy and handled so clumsily, that it lost any and all impact as a significant force in solving the case. But it was truly and exceptionally well written in its own right.

I have no idea if we'll be seeing the Dark Cousins again, or if we'll ever get any sort of explanation for what they were and why the Gelpha High Lord wanted to see them, only to ignore them once they were in Bel-Athaer. I desperately wish we'd been given some clue in this book, but the issue may be redeemed if the race is in future books. As it stands, there was just too much in this book that was inconsistent, poorly developed, unexplained, and frustrating to enjoy the story. The third book in the Whispering series, Demon on a Distant Shore, was previewed at the end of The Demon Hunters. I'll be reading it when it's available based on the promise of the first book and my interest in Tiff and her abilities, but I can only hope that some of the issues I had in this book are resolved, because I don't know if I'd continue any further in the series if it's more like this one than the first. 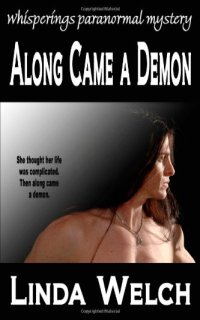 Return to Top of The Demon Hunters

Return from The Demon Hunters to OGBDA Book Reviews Home