Full of Sound And Fury...Signifying Nothing 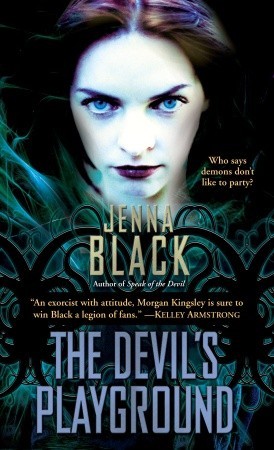 I hate to butcher old Willy S. here, but that's the feeling I was left with upon the conclusion of The Devil's Playground, fifth book of the Morgan Kingsley, Exorcist series. I've been reading this series since the first (The Devil Inside) and have suffered the peaks and valleys along with Morgan and crew ever since. Up through Speak of the Devil (Morgan Kingsley, Exorcist, Book 4) my biggest problem with the series was, in fact, Morgan herself. Rarely have I read a more self-involved, hypocritical, judgmental, bigoted, unsympathetic 'heroine' in an urban fantasy series. Where a reader would expect some growth over the arc of a series, there just wasn't any of a measurable amount, though the glimmers were there at the end of the last book. The good news about The Devil's Playground is that Morgan didn't annoy me nearly as much as she has in the past, and did, in fact, make both conscious and unconscious strides towards being an all around a better person. She wasn't great, by any means, but she was better. It made for a much easier read. Unfortunately, Morgan isn't the only problem in The Devil's Playground.

I'm not quite sure what to make of Jenna Black as an author. Her narrative is smooth, the mechanics of her writing are excellent, and her imagination is impressive, but there are so many very perplexing things about this book in particular and the series in general. Where I criticized Speak of the Devil (read here) for containing nothing of any consequence concerning the overall series arc of the Lugh/Dougal conflict, I'm still left feeling slightly agog that the pendulum swept so far in the other direction here. The Devil's Playground is almost exclusively about the Lugh/Dougal conflict. Heck, maybe that's why Morgan didn't annoy me as much, because with everything going on about the impending Lugh/Dougal showdown, there just wasn't time for Morgan to focus on Morgan to the degree she's done in the past. To put it bluntly, this book just wasn't about her (though the parts that were...especially the Morgan/Brian/Lugh troubles...I found to be a bit unsettling).

The published book description for The Devil's Playground is misleading. Yes, Lugh moans while Brian and Morgan are commencing an intimate moment - but not because he wants to share Morgan...in fact, it's because he's enjoying sharing Brian with Morgan. And in classic Lugh style, he's decided it's time Morgan tells Brian that. Lugh's sort of like a twisted Dr. Phil sometimes. Not surprisingly, Brian is a little disturbed by the knowledge that Lugh wants him, and he can't immediately reconcile that when he's with Morgan, he's also with Lugh, and that will always be the case. Relationship drama ensues due to that.

Also in the book description, it mentions that Shae, illegal demon and owner of the Seven Deadlies demon sex club, enlists Morgan's help heading off a crisis. No. Actually, Shae, annoyed at being ordered around by some big bad demon, goes to Morgan to sell some information about an unusual influx of demons in her club. Demons in bodies that look a little too hard-ridden and used up. Like perhaps demons were taking over the bodies of the fringe of society - junkies, prostitutes, and homeless. And if that's the case, Morgan knows Dougal has got to be somehow involved.

There's a lot of talking. By the middle of the book all that talking had dragged down the flow of the story to such a degree I was quite painfully bored and almost completely apathetic about the whole thing. And there was still more talking. What little action that was peppered through the book didn't alleviate my boredom, though I will say, there were several scenes in there that I did like (one in particular between Morgan and Lugh). And that's one of the things that is so frustrating about Jenna Black and this series. There are moments that just flat out work for me, that I think are valuable plot progression and interesting development...and a lot of stuff that doesn't. That very inconsistency has been one of the few consistent aspects about the series as a whole.

Looking back on the last two books in the series, I would have preferred the plots to have been more intertwined - giving a far more balanced story for each book that included Morgan's life going to hell as well as the progression of the Lugh/Dougal arc. Also, Black's penchant for repetition is back in this book. In the last book it was Morgan saying over an over again just how bad a liar she was, in this one it was the 'hate/don't trust/don't believe Raphael' banner that got the most waves. All through the book that's mentioned over and over again. I know Raphael's been a bad boy in the past, but after awhile, I felt the pointed and repetitive smears to be pitiable.

Black's book isn't consistent and neither is the series. That's not to say some parts weren't awesome, because I admit, some were. The reason I didn't rate this book two stars, in fact, was the last twenty percent of the story. Not to give away any spoilers, but when the time came that all the talking was done, the story progressed rapidly and it was well written from that point through to the end (not including the epilogue). That final 20% or so is what prompted me to liking it just enough for the three stars.

Now, about that epilogue... I don't know if the series is over. Is this the final installment of the Morgan Kingsley, Exorcist series? When I finished The Devil's Playground I went to the author's website to see if I could find that answer, because it was very much written like it was, but I couldn't find anything. There are unresolved issues, but it appears that the overall arc between Lugh and his usurper brother Dougal is finally concluded. The anemic and slightly odd wrap up in the epilogue, along with those unresolved issues and some not even addressed, though, made what closure there was feel more than hollow.

Honestly, I don't know if I would continue with Morgan and crew if there are more books in the works. I just haven't been satisfied with the world or the characters enough to enjoy hanging out with them any longer. I've never felt like the demons were all that well conceived, as it's always squigged me out that humans have willfully (sometimes against their will) subverted their lives to give a demon a body. Black never quite gave her demons enough soul and heart to really make me okay with that. In that, I felt much like Morgan herself did. Demons take people's...lives - even if they're given voluntarily. And the demons of Lugh's council just aren't really all that nice, either. Lugh, perhaps, was the most honorable of them all and even he wasn't someone I'd want to spend any significant time with. Adam and Raphael were just flat out scary individuals, and no matter how much I liked them, they were never not scary individuals. Ultimately, that's the core of why this series as a whole isn't a favorite of mine. If you don't necessarily like the good guys...and you surely loathe the bad guys...what's left?

A series full of sound and fury...signifying nothing.

Return from The Devil's Playground to Urban Fantasy Genre

Return from The Devil's Playground to OGBDA Book Reviews Home