The Dragon of Ankoll Keep

A Surprising Depth of Character 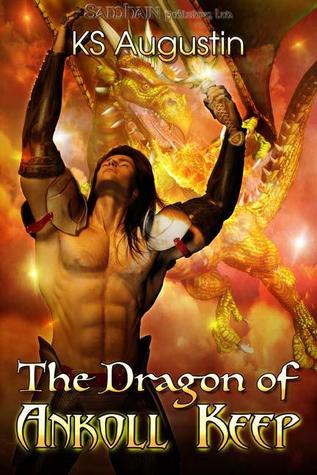 In a city miles away from Ankoll Keep, a young thief hears a story of hidden gold and in an effort to escape the notice of the law enforcers, she flees towards the hope of a peaceful future. This thief, Gasmin, is jaded by a life of crime and loneliness, distrustful of others and wary of her own safety. Just not wary enough, as just shy of her destination, she finds not rest, but victimization, and for the second time in her life, she's raped. Fear drives her onward, to the castle that may be her very salvation. What she finds there, however, is not gold, but a man. A man who doesn't beat her or abuse her, but feeds her and talks with her and slowly - ever so slowly - starts to earn her trust. A man with a fantastic and hard to believe tale and an even more difficult to accept plea. To escape from a centuries old curse that leaves him in mindless dragon form for two weeks a month, Ankoll pleads with Gasmin for the cure. Will the world-weary young woman be able to save her new friend - or will the consequences prove too much?

I enjoyed this novella quite a bit, but to be fair, it's not so much the story that I liked. The plot was okay, but because of the length of the novella, there just wasn't enough room to fully realized potential of the sort of quest and challenges that Ankoll and Gasmin faced, and that's a shame, because there could have been a very nice, epic fantasy romance here. I commend Augustin for making the most out of the pages given, however, and offering readers a surprisingly robust and realistic development between Ankoll and Gasmin, and defining Gasmin in particular in a very organic, believable way that truly allowed for me to feel for her plight and understand her situation. I don't think Ankoll was similarly defined, but he was likable enough, and it was really Gasmin I was rooting for anyway.

There was a lot of plot points that were covered, if in a contracted fashion, and honestly, I would have enjoyed perhaps a few less in order to see more detail of the world and the symbiosis of the relationship between Ankoll and Gasmin beyond the walls of the keep, where Gasmin's understanding of the seedier nature of the world made her seem far more Ankoll's equal and helpmeet after his centuries of isolation. Still, I enjoyed this novella and had a true sense of surprise at how realistic and organic the evolution of the relationship between the two main characters, and how robust a read this novella turned out to be.

Return to top of The Dragon of Ankoll Keep