The Dragon Who Loved Me

The Fearless and The Abhorrent 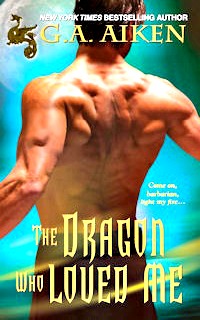 For five long years the war has been waged against the Irons of the west, the alliance between the Southland Fire Breathers, the Northland Lightnings, and the Mad Queen Annwyl the Bloody holding strong against a force of almost unimaginable numbers. For five years mates have been apart, children have grown, life has slogged on. And everyone, frankly, is tired of it.

Ragnar the Cunning is the master strategist of the dragon forces, and he's got a plan underway to finally bring an end to the war, but not before some choice intelligence drops in his lap (courtesy of his love's...skill...at torturing) that could change the course of battle and break this vicious stalemate. The safety of Annwyl and Fearghus' twins and Briec and Talaith's youngest daughter are at stake, and the choice of whom to trust with that information, who to send to secure them, is one that could affect not just the war, but the lives of everyone in two different kingdoms.

The plan starts simple, Keita and Ren will travel to the childrens' sides and secure them, their safety across a war-torn land assured by Rhona the Fearless, a highly skilled Cadwaladr dragoness soldier in the Queen's army, and Vigholf the Abhorrent, brother to Ragnar and second of the Olgeirsson Horde of Northern Lightnings, who is determined...in that totally chauvanistic and not the least oblivious way he has...to protect the weak female warrior on her cute little trek.

Rhona calls him Commander Pest. Vigholf calls her The Babysitter. She hates him. He watches her. And their epic journey starts here.

"I'm a dragon, my lady. Dragons don't become martyrs. We create them."

There are books that I adore, authors that I follow rabidly, series that I love, and a myriad combinations of all three. Then there is G.A. Aiken. Or Shelly Laurenston, as she is otherwise known. Regardless of the name on the book jacket, over the course of all her published works Aiken/Laurenston has - hands down - given me the most entertaining reading of my long, long experience.

In short, her books make me happy.

I'm not talking about whether or not I liked, loved, or was ambivalent about an individual book's content or characters, I'm talking an overall feeling of general happiness when I read them. It goes beyond appreciating technical writing skill or how creative and imaginative the world. It's not just about how well a series is fleshed out or how lovable the characters are that inhabit that world. It's even more than the fact that every one of the featured female characters in her books are all brutally strong (physically, mentally, or both), independent women who are more than capable of taking care of themselves - something I'm known to favor. Of course that all plays a significant part. How could it not? But it's also in large part the way Aiken/Laurenston thinks and relates those thoughts in her books; the humor - the bawdy, rowdy, bloody fun of it all, and yes, even the moments of drama and angst, that combines with the rest to put her books head and shoulders above other reads.

There's just something about the Dragon Kin series...and the series/books she writes as Laurenston...that intrinsically appeal on every level, even if (as in the most recent book in the Pride series), the stories or characters aren't always my favorites in their respective series. I just think of these books differently than others I've read, feel differently about them. Bluntly put, I'm a fan. A huge, huge fan.

That being said, The Dragon Who Loved Me is one of my favorites in the Dragon Kin series. Not because of Rhona and Vigholf, really, though they are adorable, perfectly matched, and a lot of fun as individuals and as a couple. In truth, their relationship evolution was one of the more peaceful and easy I've read by Aiken/Laurenston, and the characters themselves are a bit more low-key than the royal dragon contingent so the romance story arc lacked a little of the intensity of the other pairings. In this book, though, it's the scope, the depth, and breadth of the surrounding story, as well as the feeling of seamless reconnection to previously featured/introduced characters who I've long since loved that worked so well for me here.

Everyone's back, and I applaud the attention to detail and continuity that Aiken/Laurenston maintains as the war plods on, battles get fought, lives are saved...and lost, and characters and relationships tested. It's fairly amazing, actually, just how huge and complex this book is as far as plot and pacing and characters. Definitely the most dynamic and multi-layered I've seen in the series so far, though perhaps not the most emotionally powerful. It certainly didn't turn me into the blubbering mess I was during What A Dragon Should Know, the third book of the series (and I thank hell for that, because I'm quite happy never to go through that again). It is the mark of an accomplished author that so very many characters and such divergent plot threads were woven together into such a rich and satisfying tapestry of reading entertainment. I loved it.

Maybe the humor that Aiken/Laurenston brings to the table isn't for everyone. It's certainly bawdy and crass and no-holds-barred. So is the sexuality in her books. Hell, so are the lives of her characters and many of the characters themselves. The books also tend to be bloody with the occasional pillage and plunder and more than occasionally a dismemberment...or ten. I can't fault those for whom that may not appeal. Maybe it says something about me that I find it so very appealing. Don't really care, actually, because there's no other author I've ever been able to come close to saying this about (though I for sure wouldn't mind a legion of them): Whether it's G.A. Aiken's Dragon Kin series or Shelly Laurenston's various series/books, her books make me happy.

"Right now she hates me. That is a form of caring, which could easily, with some skill, turn to love and eventually adoration."
"My mum was right. You are thick as two planks."

"The beauty of Mum is that she never gets bored. She can kill and kill for days at a time without ever feeling boredom. I think that's a foreign word to her. Like rational. Or caring."

"So what are you going to do? Wander around all evening bleeding like a stuck cow until you pass out and die and we're forced to quickly burn your remains so the stink of your corpse won't bother the children?"
"Your concern for my well-being overwhelms me, Sergeant."

"You are, however, surprisingly light of touch."
"Pardon?"
"The way you're holding my hand. I always thought you'd be more of a mauler. Like a diseased wolf chewing the knuckles off me fist."
"That's very nice."
"Not really."
"I was being sarcastic."

"I'm irresistible."
"I've been resisting you for five years."
"Because you're stubborn and unreasonable. I thought we already established that."

"Your cold, inflexible heart makes me burn to be inside you."
"Charmer."

We are twin minds :) The love I feel for Shelly Laurenston is HUGE! Just thinking of her characters make me smile... all of them. I think she is one of the authors that don't get the credit or acknowledgment she deserves. Great review and totally spot on!

Thanks, Mariana! I've long thought Laurenston was a completely underrated author. Her books make me laugh out loud, make me cry, make me just totally fall for the characters. And each new book is like visiting with fond friends even as new friends are introduced. Love. Her.
Glad you commented! It's great to hear someone loves Laurenston's work as much as I do. ;-)

I've only read the first two (and none under Laureston) but REALLY enjoyed them. Need to finish up this series!!!
And I agree - I like books that make me happy too :)

Mandi - OMG - you HAVE to read her Magnus and Pride series (printed under Laurenston). You'll enjoy them.

Nice review! Have to check out the books.

Sexy, bawdy fun, Julia. I think you'd like them. I'm not even a huge fan of fantasy and I LOVE the Dragon Kin series.

Return from The Dragon Who Loved Me to Genres