The EDGE Of Trust 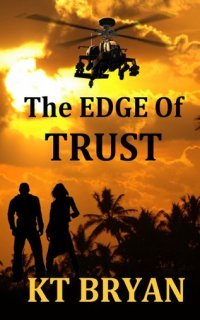 Disclosures:   A copy of this book was provided to me by the author for review.

When EDGE operative Dillon Caldwell was given a mission to infiltrate the Sanchez Drug Cartel and bring down its head, Rafael Sanchez, Dillon figured it would be a long, grueling year that he might not survive. He had no idea it would be three horrific, gut-churning years, or that the price paid for his efforts would be a nightmare worse than abject failure.

Then, after his cover was blown, he watched in horror as his wife was slain in front of him. His parents were next. And his sister, who died, broken and burning, in his arms.

Dillon, wracked by loss and guilt, is nearly rabid in his hunt for Sanchez, intent on ending his reign of terror. What he finds along the way, though, will change everything Dillon thought he knew to be true. Washed up on a nearby beach, badly beaten and suffering from exposure, is the woman he thought dead for the past twelve months. His wife Sara is alive.

Dillon's stunned relief and joy are short-lived, however, shredded by the razor-sharp fangs of betrayal and kept secrets, scorched by the obvious disdain from a woman who may as well be a stranger. And if that's not enough, not only is Sanchez is still out there, but Dillon can't even trust the people he works for. Not when they kept the truth about his wife from him, not when someone on the inside burned his cover.

He's got a sadistic, murderous drug kingpin after him and someone from his own country betraying him. He's got a wife who is alive, but looks at him with loathing. And he's got the knowledge that, despite all best efforts, he has failed every single person he loved. Struggling with that burden is bad enough, but Dillon's plate isn't yet full. The stakes that he's played with for three years are raised higher still when he finds out that Sanchez has something of his, something Dillon didn't even know existed. And it's a game-changer in every way.

K.T. Bryan doesn't just kick off her Team EDGE series with this powerhouse of a story, she fills it with rocket fuel and launches it straight into the stratosphere. Powerful writing, a hell of a plot, and two flawed characters thrust into one incredibly perilous situation after another are the backbone of this awesome debut. As in all things, the devil is in the detail, and Bryan proved herself adept and snagging that devil by the throat, slamming it down on the page, and introducing her characters to hell. Gut-churning emotion, sweat-soaking suspense, and so much action I felt like I needed a nap after, The EDGE of Trust snatched me up and commanded my attention through every single white-knuckled page.

Sure, there is no shortage of like-themed romantic suspense out there. There are certainly elements in this book I've read elsewhere. It has a military flavor, of course, and the former Navy SEAL alpha male warrior, now an EDGE operative, with plenty of testosterone and a rabid sense of duty to cause and country. The Bad Guy, head of a Mexican drug cartel, is an extremely violent sociopath who is so coldly ruthless it's a wonder he doesn't shit ice cubes. You'll surely recognize him, too, for all that type has been portrayed in everything from books to television to movies.

The plot, too, didn't have a whole lot of surprises in the direction it took or in it's major points...but how it was set up, fleshed out, and executed in full was superb. The fluid timeline, including moments of the past interspersed with current events, so often a stumbling block in books, was handled exceptionally well. Readers are treated to a fairly comprehensive view of the lives of the characters leading up to and including the real-time crises without once obscuring the main plot thread. Of note, I loved the passages from Dillon's journal, as it gives readers insight into the emotional price an undercover agent pays and how his character in particular evolved during his undercover assignment.

And when it comes to Dillon and his wife Sara as characters, we reach what, for me, elevated this book from a solid suspense read I really enjoyed to one of my favorite reads this year. Not only were they deliciously flawed and grievously wounded individuals (preferred for the depth it gives the characters), but their emotional baggage and all their issues were ripped open and exposed in deliciously gritty, brutal fashion, in actions and reactions, fights and fury, angst and passion. It wasn't always pretty, certainly wasn't traditional for a romance novel, but it was so damn realistic (within the fictional framework) that I was left shaken by several scenes, my heart in my throat and my stomach in knots.

Grief, confusion, betrayal, guilt, blame, shame, and worse...including ugly emotions that danced dangerously close to hatred, Bryan gleefully dipped her brush into them all and splattered them into the gaping, bloody wounds of her characters' lives. The result was a story-long evolution of a relationship, one that provided an unflinching and brilliant portrayal of two characters who used to love each other very much, then lost it all...or gave it away, and now have to deal with the aftermath of every painful choice and uncertain decision if they are going to have any hope of peace. Never mind absolution.

It was messy and harsh as hell, and made for some gripping, frustrating, and agonizing reading. I loved every second of it.

This definitely isn't a book for the faint of heart. Not only was the emotional gamut fairly harsh and unrelenting, but Bryan doesn't shy away from scenes of physical brutality either. While the majority of the book was fairly average for the genre in that regard, there were at least three scenes I can think of right off the top of my head that pushed the envelope. One was graphic enough and included subject matter that hit me hard, and I'm not a particularly sensitive reader.

I am a reader who appreciates Bryan's ability to create the sort of story she's written here. Well-written and complex, taut and emotional, action-packed and exhausting, this series debut is the whole package. It's one of the best romantic suspense novels of this type that I've read and one of my favorite reads of the year. In short, wow. Awesome read.

Return from The EDGE of Trust to Romantic Suspense Genre

Return from The EDGE of Trust to OGBDA Book Review Home