A Little Too Much Procedure 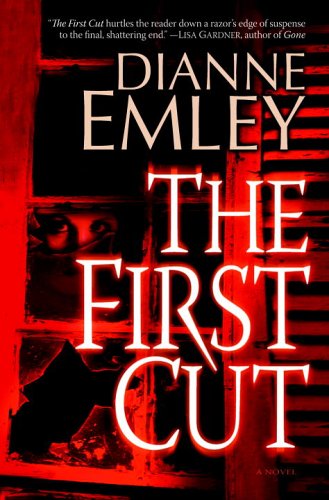 When I sit and think back over Dianne Emley's debut novel, the word that keeps surfacing in my mind is "thorough." The First Cut is an intensely thorough police procedural thriller that does more than just cover all the bases, it takes a few extra laps as well. And that was a bit of a problem for me, but I'll get into that in a minute.

A year ago police officer Nan Vining of the Pasadena Police Department was targeted by a monster and brutally assaulted. She survived the attack...eventually...after being dead for over two minutes. She was revived and spent a year recovering from the physical and psychological wounds. On her auspicious first day back, Vining has to face a couple of harsh truths: a policewoman has been murdered and her naked body dumped in the PPD's jurisdiction, and she's not as over her own attack as she'd thought. Battling personal issues and damage that is larger than just the attack by a madman a year ago, Vining feels a kinship to this slain officer and finding her killer becomes an almost personal quest.

The First Cut is a brilliant study in police procedure, and there is little doubt that Emley is on her way to a fantastic career if all of her work is as comprehensive as her debut novel is. The plot is extremely slow moving, however, and a lot of time is spent on descriptions of every scene, as well as splitting time between the current investigation and the unsolved crime of Vining's attack. While I could completely sympathize with the PPD's frustration at the slow going of the case, as I certainly shared it, I don't necessarily think that was what Emley was going for, and that was a problem for me. I think this novel would have been better served with a narrower focus and trimmed down narrative, and instead of the brief attempt at connecting the current case to her attack a year ago, and spending the time with Vining focused on the resultant echoes of trauma, dole out the information from her previous attack far more sparingly than was done. I imagine that subsequent books will deal with that crime and the apprehension of T.B. Man (The Bad Man), a name Vining's daughter dubbed her mother's attacker to humanize him, so a lot could have been left to those subsequent books.

The good news about The First Cut is that while it may be a bit over written, what's there is also well written. The current case was definitely macabre enough to catch and hold my attention, and I appreciated Vining for her damage and insecurities, and for her strength of character as she strove to rise above them. I was also pleased by the relationship between Vining and her daughter, and enjoyed the scenes with them in it. I'm looking forward to seeing further development between Vining and Kissick, and I'd like to see Ruiz get a bit of a smackdown for his not-so-subtle remarks. The cast of The First Cut is definitely large, and it'll be interesting to see if some of the other characters develop a bit more than the stereotypes they represented here.

I have to admit, though, Emley wrote this book in a third person omniscient point of view mostly from Vining's perspective, yet I never quite lost the feeling that the characters and story were always a bit more than an arm's length away. Through the book, Vining is referred to as Vining, not Nan, even as she's thinking of herself, and that subtle yet important decision kept my acquaintance with the character at a far more casual level than I would have preferred. Speaking as a reader, I don't feel like I ever really got personal with her, despite the plethora of facts given about her life and thoughts.

This is strictly opinion, but I've always felt the most successful thrillers are those that grip a reader by his or her throat and force him/her to feel for the characters, and I can't help but compare this book to some of the great thriller reads of all time and find it sorely lacking in that regard. Is there any among us, for example, who are familiar with Silence of the Lambs, who didn't have a visceral reaction to the connection between Clarice and Lector or could imagine what Clarice felt when the lambs were screaming? I believe what makes thrillers...well...thrilling and suspenseful is the threat to characters we become fond of as people, and because I didn't quite get there with Vining, this book fell short on that level.

Still, like I said, it's exceptionally thorough, if a bit plodding, and there is a realistic representation of the often tedious and thankless nature of police work. There was also a slight paranormal thread included, but that felt a bit out of place at times, given the stolid nature of Vining as a character, and I wasn't quite sure if Emley was trying to allude to Vining having some paranormal abilities following her death or if it was strictly a byproduct of Vining's continued damage. It could go either way, though it did seem to lean more heavily towards a paranormal reason. It did serve to further developments with T.B. Man, as well as provided Vining a handy excuse to follow leads that pop up only out of her own intuition, but I can't say it was my favorite development.

I can certainly say I enjoyed the book enough to continue to follow along with the continuing saga of Nan Vining in Emley's second book, Cut to the Quick.

Return from The First Cut to Genres

Return from The First Cut to OGBDA Book Review Home