The Game of Love 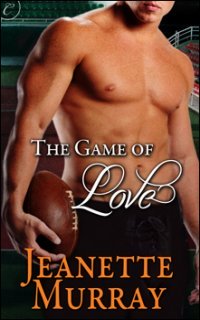 Former professional tennis player Christina St. James doesn't have an idyllic past. Raised by emotionally stunted and controlling parents who withheld love and demanded perfection from their less-than-perfect tennis-playing daughter, she was ripe pickings for the sort of emotionally abusive bastard that was her NHL star goalie ex-boyfriend. Getting away from him was one thing. Building herself back up into someone who could look herself in the mirror without flinching was another thing altogether. She did it, though - even if remembering her past with her ex still gives her rough moments.

Now she's got a new job at a local high school. She's to coach their tennis team and teach math. She's got big plans for the previously mediocre team and she's excited to get started...right up until her plans slam her head first into God's gift to the athletic department - former NFL player and current football team head coach Brett "The Wall" Wallace. Over six feet of chauvinistic, football-or-nothing, egomaniacal muscle and smarmy toothpaste-commercial smile. Chris has every intention of knocking the big boy off his pedestal if he tries to stand in her way.

Brett Wallace thoroughly enjoys the view of the new tennis coach. Long, lithe, and lean in all the right places, the woman is a walking dose of hormone therapy. Pity about the attitude and the mouth on her, though. No man should have to put up with that, especially Brett, who had his fill of pro-hos after the number his ex-wife did on his heart and his wallet. Still, she was awful nice to look at...and he was going to have to work with the shrew to figure out a couple of sticky sports financing situations, so he may as well try to be nice. Charming even.

Only that doesn't go over so well and the sparks fly fast and hot. It isn't until the school's athletic director forces the issue that they are even capable of being in the same room together without wounding each other. That turns out to be a good thing, though, because it doesn't take Brett long to realize he may have initially misjudged Chris and failed to credit her with the talent and grit she displays with her team. In fact, there are several things about the sexy tennis coach that definitely make him want to field that ball and rush for the end zone. Problem is, Chris isn't interested in inviting another jock into her life or her heart. She barely survived the first one.

The whistle just may have blown on any potential relationship between Chris and Brett before either of them really have a chance to face off on the gridiron of love.

Gridiron of love? Seriously? I can't believe I actually typed that. Eh, well, it's fitting - if ridiculously trite, so you'll have to forgive me. Truth is, this book tickled me to no end. Not only was the enemies-to-lovers theme well-developed and executed, but the characters were absolutely perfect for each other...after a few initial rough spots.

As far as sports-themed contemporary romances go, this was a little more high school and less major league, but I still enjoyed the way these two coaches dealt with their teams, their lives, and each other. This book just really worked for me. I thought the humor was great, the primary characters complex enough - and occasionally hard-headed enough - to be both charming and believable, and the secondary characters fit nicely with both of the main characters, accentuating their individuality and helping define their lives outside the scope of the romantic plot arc. I find that aids in main character depth and complexity and helps flesh them out.

Admittedly, there were times when Chris annoyed me. Especially at the beginning, where her militant stance against professional sports jocks in general and school sponsored, football-flavored favoritism in particular seemed a bit too harsh, and in drips and drabs throughout the book, when her mommy and daddy issues combined with the ex-boyfriend issues and made her a little crazy. There were also times when Brett's lack of trust and his mindless acceptance of some Very Bad Lies made me want to spike him in the end zone. Still, he had a sort of sweet, clueless charm and aw-shucks demeanor that really appealed to me, so despite the few moments of frustration, I liked him a lot.

And I loved them together.

Murray offers up a fun blend of likable characters, witty banter, tongue-in-cheek humor, and physical chemistry that really revved my reading motor. And I totally give props to her for creating a male character capable of apologizing and compromising when he knows he's been a total tool. How cool is that?!

The romance is more character-driven than plot-driven, and there were a few fairly predictable plot points along the way. That being said, I found this book to be a thoroughly entertaining light read that either had me sweetly melting with a big sappy grin on my face or chuckling/laughing out loud at the characters and their antics. By now it should be fairly clear to anyone familiar with my reviews that if a book can make me chuckle or laugh out loud as this one did, I'm a happy, happy camper. This one did. I am.

It wasn't a hardship to watch her tight bottom swing as she turned into a neighborhood of new townhouses. But, with her in an outfit that left so little to the imagination, he had to wonder where she stored the pitchfork.

It was true what they said. The Y chromosome really was just a damaged X.

"Men are completely ignorant of what will set a woman off. Oh, I'm sure you didn't say anything mean-spirited or with malicious intentions—"
He held back a wince at that. Thanks, Mom.
"—but you're a male. And God put men on this earth with a taste for shoe leather."

Her mouth didn't get the schedule of events, apparently, because it felt so full of cotton no words would fit. So she nodded like an idiot.
Yes, dazzle him with your witty nodding. That'll do the trick.

No, hell probably has better transportation. I bet that handbasket is in good working order.

Return to top of The Game of Love