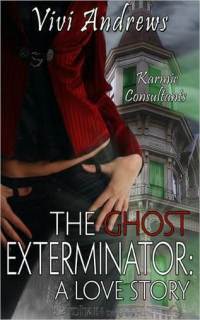 Every once in a while a book drops into my lap...or more accurately, downloads to my Kindle...that I got on a whim, based on nothing more than an interesting premise and a few decent reviews. I may not expect too much from them, for whatever reason, but if the price is right, I'm usually willing to give it a try. Then, every so often, one of those books turns out to be a fantastic read that I enjoyed immensely, and I'm doubly impressed because of my lack of expectations. The Ghost Exterminator is one of those books.

Jo Banks is a Goth chick wannabe stuck with the body of a Playmate of the Year. She wears her lack of normalcy on her sleeve like a badge of honor...and a shield to protect herself, yet feels deeply the slings of family and friends who don't accept her for who she is. Wyatt Haines doesn't feel much of anything beyond annoyance when something upsets his carefully controlled world. He's about as rigid and close minded as a person can be and the only thing he believes in is the bottom line. Well...that and the fact that his new house hates him.

Wyatt doesn't believe in ghosts. Jo exterminates them. Both have their issues, not the least of which is that they're complete opposites and each generally holds in great disdain everything the other is all about. That, however, doesn't stop the sparks from flying - it actually ignites them. It also doesn't prevent Wyatt from accepting that there's something wrong with his house, and to protect his investment, he's determined to try every option, even if that means having the wacky Jo Banks try to work her mojo on his newest jewel in his Bed & Breakfast crown. The experience will alter both their lives...well, either that, or end them.

I loved this book. I did. Not because it was so spectacularly well written or because there were no issues with the plot and technical aspects, but simply because it was a wicked amount of fun and I loved the sharp banter between Wyatt and Jo. It was fun, it was funny, and sometimes it was just plain smokin' hot.

This book is the epitome of a light read. There were, of course, some issues with the plausibility and more than a few plot threads that were introduced but not satisfactorily resolved. I would have loved to see Jo's family get a bit of comeuppance for how they treated her at a party, and I thought her mother needed to be possessed by the ghost of kindness. Reptiles are warmer than that woman. I thought some of Wyatt's thoughtlessness deserved a sharper response. I also think there was a serious lack in world building beyond the barest necessity, and the book itself was mostly dialogue and description of the actions of the lead characters, so I didn't get a clear picture of anything outside of that bubble.

Despite that, or maybe because of it, this was an extremely fast read and the pace of the plot was lightning quick. The relationship between Jo and Wyatt, however, evolved in as realistic a fashion as can be expected in any light romance, and I had no complaints about the legitimate issues that they addressed in approaching their HEA.

Where this book shines, though, is the dialogue between the characters and the inner monologue of the characters. I chuckled and laughed out loud in several places, and that's so incredibly rare for me, as rare as it is prized. Both characters have a bit of a potty mouth, and Jo in particular has a very...earthy way of describing things, and I found it likable and amusing. I found Jo likable and amusing, actually. There were even moments in this book that surprised me with its insightful observation.

Some of my favorite gems:

"That stick shoved up his ass must be tickling his tonsils. Poor baby."   ~ Jo Banks

"Wyatt had run from her last night like she was a leper chucking spare body parts at him."   ~ Jo...again

"...slapping an I-am-peering-into-your-soul-with-my-super-ghost-vision expression onto her face, which hopefully did not resemble her I-am-thinking-of-stripping-you-naked-and-covering-your-body-with-chocolate-syrup-just-so-I-can-lick-it-off expression."   ~ Still Jo

"The pencil-pushers think I'm nuts, yeah, but it isn't about what they think, it's about what I do. I commute to work. I have an office and a desk. I check my emails and get coffee from the break room, I do normal stuff. So even if they avoid me like a leper, at least I'm still behaving normally. I don't come in for them. I do it for me."   ~ Jo to Wyatt, in a moment I found both insightful and poignant.

I could actually go on. The whole book is littered with both funny zingers and witty gems, and the interplay between the Trekkie Goth girl and Mr. Executive Starched Shirt is fabulous. It elevates what could have just been a slightly flawed but pleasant romance of little note into something that I truly loved. I highly recommend The Ghost Exterminator if you like light, funny romance and don't mind a few ghosts. The book will be in paper print in November, but this full length novel is available now electronically, and the price makes it that much more enjoyable. It's the second in the series, and I haven't read the first, The Ghost Shrink, The Accidental Gigolo & The Poltergeist Accountant, which appears to be a novella-length story, but I will, as will I read the third, a full length book, The Sexorcist: Karmic Consultants, Book 3. I'm looking forward to them both.

Return from The Ghost Exterminator to Paranormal Romance Genre

Return from The Ghost Exterminator to OGBDA Book Reviews Home