The Ghost Shrink, The Accidental Gigolo
& The Poltergeist Accountant 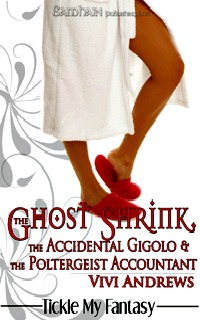 Considering that the helpful, if difficult to take care of at the drop of a hat, suggestion came from her boss, it wasn't Lucy's fault that she assumed the tall, dark, and delicious-looking male who banged her...er...banged on her door the next morning was an...employee bonus from the boss. He introduced himself as Cox, after all. Imagine her mortification, then, when she realizes that Jake Cox not only isn't a gigolo that her boss set up to help her out, he's a private investigator and the brother of said boss.

It's a light read, and it's told with Andrews' quick-witted and carefree style that goes down so easily. As a novella, it lacks in the depth of plot and character definition areas, though enough is provided for some fun. My only real problems with it were that it was a bit too light for me, almost slapstick, and Lucy and Jake's seismic-level attraction was a bit shallow for my tastes. There just wasn't enough time in the story, which even for a novella leans more towards the shorter end, to develop a relationship between them that was based on anything but physical attraction, so that didn't quite work for me.

Still, this is a novella that isn't supposed to be taken too seriously, just enjoyed for what it is. It may not have been totally to my taste, but The Ghost Exterminator definitely was, and I've already downloaded The Sexorcist, which is the third book in the series and the second full-length novel. I will say, while I enjoyed seeing Lucy and Jake's introduction, as I'd met them in The Ghost Exterminator, ultimately either of those stories could be read as stand-alones.

Return from The Ghost Shrink, The Accidental Gigolo
& The Poltergeist Accountant to Paranormal Romance Genre

Return from The Ghost Shrink, The Accidental Gigolo
& The Poltergeist Accountant to OGBDA Book Reviews Home