So Very Hot, So Very Good 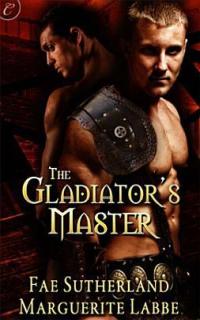 With his uncle's sudden death and the inheritance it garnered, Caelius saw a golden opportunity. He has little desire for the villa he received, but the ludus is another matter altogether. With strong gladiators for the fights that are all the rage, Caelius can strengthen and expand his political alliances and see his aspirations come to fruition. That is his plan upon arrival at his new holding. It becomes far more complicated, however, when he sees the men and their quarters.

It's not only the villa in wretched disrepair, the gladiators are in equally poor condition. For a man who believes that the duty between slave and master goes both ways, it is a horrifying situation. One he has every intention of correcting. Saying so to his overseer draws the sharp, suspicious gaze of one warrior. Caelius garners a wealth of information in that proud, enraged glare. He knows he has at least one gladiator who is not yet felled by the appalling conditions or bowed by his fate.

A flicker of need, one considered aberrant for someone of his standing, sparks into a conflagration of lust with that one challenging, loathsome look. And Caelius yearns for more.

Knowing your place and ceding to it are two very different things for the gladiator known as Argon. The fire of hatred and fury rage in his blood as he silently rails against all of Rome for his enslavement. He is committed to one thought, killing his Dominus, before accepting the inevitability of his own death. Just because this new Dominus is fair of face and seems less vile than his uncle doesn't mean Argon's thirst and determination for vengeance has been assuaged. Dominus Caelius will die by Argon's hand.

Until such a glorious time as that, he will bide. He does, after all, know his place. It didn't take long in the man's company to figure that Caelius desired that place be in his bed. The manner in which he desires him, however, and what Argon learns while he's there, is a stunning revelation that startles even the most wild, untamed recesses of Argon's soul. And, perhaps, forces a shift in thinking on many things. Perhaps.

You know, I'm just going to get this out of the way first. It's not a story element I usually highlight, even when I review erotic romance, but it deserves its own paragraph in this one. The sex. The searingly hot, powerful, intense, man-on-man sex. This book has lots of it. Whew! Lots. Smokin' hot, pulse-pounding, delicious. If that's not your cuppa, then by all means, avoid this book, but if it works for you, The Gladiator's Master should be in your TBR pile. At the top. Just keep away from flammable objects and read with a bucket of water near at hand, because the sex in this book is explosive and reading it could break every fire safety code on the books. Consider that my Public Service Announcement of the day.

It's good to get that part clear, because it frees me up to say that none of that is why I loved this book. Sure, it was a damn nice bonus (wickedly, wonderfully nice), but the story and the characters that Sutherland and Labbe have created here pretty much rocked my world. I know a whole lot of nothing about ancient Rome beyond a distant history class and a movie or two, and I can't remember ever reading another book set in that time, so I can't speak intelligently on the historical accuracy of the book, but it seemed pretty authentic to me, and that let me sink right into the story and settle back for a rich, vibrant read with fabulous characters I quickly fell in love with.

I adored Caelius. Then again, he's a progressive, fair-minded man who treats his slaves as people due respect and garners their loyalty through just treatment, despite living in a world corrupt by decadence and voracious greed, so there isn't much there not to like. And admire. I suppose I could have been unsettled with him having slaves at all, but to do so would be roughly akin to being upset about the blood in a novel about vampires. The Roman Empire was not known for its humanitarian efforts. Caelius' heart was always in the right place, though, and the yearning tenderness he had for Gaidres (Argon) was as sympathetic and poignant as his frustration with the man's obstinacy was amusing.

And wow, Gaidres is one obstinate buck. With good reason, sure, but there were times I wanted to strangle him and be done with it. He was much like a cornered, threatened wild animal at the start of the book, teeth bared, suspicious, ready to slaughter whomever dared get close. Choking on pride, cloaked in hatred, his past was an open wound and his future a bleak penance. I found him...viscerally compelling. The careful modulation of his character and the development of nuanced emotion in him over the course of the book was both brilliantly executed and fabulously entertaining.

In fact, some of my favorite parts of the book were the scenes in which Caelius and Gaidres were in conversation that tilted Gaidres' world right on its axis. Caelius didn't treat him as a slave, but as a respected warrior, valued member of his household, and important resource. It was a paradigm shift for the hostile, embittered Gaidres, and the many frustration-heavy adjustment periods gave me many moments of mirth.

I loved the whole of the book. I just did. The plot, character-driven as it was, was well served by the deft creation of three dimensional and sympathetic characters. I completely understood Caelius' and Gaidres' frames of mind and their points of view, as well as the choices they made because of them. As diametrically opposed as they were in so many ways, they were also each an absolutely perfect complement for the other. The evolution of their relationship was slow, painful at turns, and downright dangerous, considering Gaidres' freely admitted intention to kill Caelius, but it was all so organic to the setting, timeline, and surrounding story elements that I stayed completely engaged in the read throughout the book.

And then there was the plot twist. I didn't see that one coming and it literally shook me, it developed so fast and had such massive and wide-spread ramifications. I was taken completely by surprise, having thought the book was going in a different direction entirely. There's something so rewarding about being taken by surprise in a book, especially when you read as much as I. It's one of my favorite things.

In fact, The Gladiator's Master embodied several of my reading favorites with its surprises, its depth, its characters, and the emotion is so easily evoked. This was as close to a perfect read for me as any book I've tried lately. I loved it. And okay, fine, once more for posterity: the sex....more than hot, it was woah-hot.

Return from The Gladiator's Master to LGBT-M/M

Return from The Gladiator's Master to One Good Book Home