I Loved Everything About It 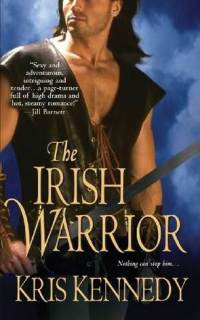 Senna de Valery is intent on a business deal with the Englishman Lord Rardove and travels to his holding to propose a lucrative partnership based on the unique quality of the wool from the sheep she's been breeding for the past twelve years. Rardove, however, has other intentions and they're not nearly as...mutually beneficial. The cruel Lord borders on madness in his quest for a legendary dye, driven by an unquenchable avarice. He's convinced that the only woman alive who can give him what he wants is Senna, and he'll stop at nothing to posses her. Horrified by the dawning understanding of what Rardove is all about, she rebels to calamitous consequences. Soon she's beaten, the fingers of one hand broken, and left alone to suffer for her insolence. Only a short, wordless bolster from a chained prisoner reaffirms her strength of pride and determination. She sets her mind on escaping. She sets her mind on taking that prisoner with her. And what that prisoner, Irish warrior Finian O'Melaghlin soon realizes is that what Senna sets her mind on, Senna achieves.

Senna and Finian race across the wild countryside of historic Ireland, intent on freedom and safety at a time when both are so desperately hard to come by. Finian is at turns bewitched, befuddled, and bemused by the woman who rescued him from prison, and he's utterly captivated and frustrated by almost every aspect of her personality. Senna admires her Irish warrior for his strength and she's drawn to his keen intelligence and ability. And she's totally enamored with his large, fine body, too. Together they are an indomitable pair, much to the surprise of them both.

I loved The Irish Warrior, and credit Kennedy for penning an authentic-feeling piece of historical romance that was written with lyrical prose and an intelligent attention to detail. I'm no history buff, to be sure, but beneath the artistic creativity in the fictional aspects this story is laden with glimpses of genuine historical figures, dialects, and issues of the day that lent a satisfying amount of realism to the plight of the characters. It enhanced the flavor of the book, adding a depth and dimension that I've often found lacking in other books in this romance sub-genre.

The intricacies of espionage and the horrible burden of impending war drive this plot and create a tense, yet realistic background for the epic journey - both physical and emotional - that Senna and Finian embark on. The true joy for me was Senna's character and how she deals with Finian and the world around her. I loved her independence, her strong sense of self, and her ability to withstand fear with squared shoulders and a belligerent chin. She's given a backstory that more than explains the unique attitudes, determination, and intelligence that comprise her character, and I thoroughly and totally enjoyed every aspect of her personality. She was everything I love in a heroine, and she made this book shine bright for me.

Of course, I also loved Finian, and thought he and Senna were great together. I loved how he recognized her as an equal...and in some cases, admired her for those cases where she was better than him. They fit so well, even when Finian fought it, struggling against his own tragic past and a belief that he's incapable of being the sort of man who could give Senna what she deserved, and I was captivated by the nuanced development of their relationship paired with such a well developed and detailed plot and backdrop. I thought Kennedy pulled it all off with remarkable restraint and an intense emotional subtlety that fit the era and my limited understanding of the time. I heartily look forward to trying more of Kennedy's offerings.

Return from The Irish Warrior to Historical Romance Genre

Return from The Irish Warrior to OGBDA Book Reviews Home