I'm Sorry, But No 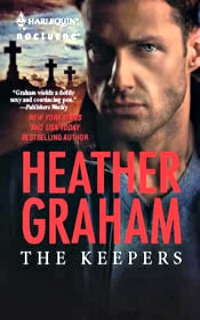 As one of the three sisters tasked with keeping the balance between the most populous groups of supernatural beings in New Orleans, Fiona MacDonald's duty as Keeper for the vampires is both a birthright and an honor. Though she's human, the mark of the Keeper imbues her with the power of a vampire and the ability to alter her form as one. Her parents' sacrifice to end a war between the races imbued her with a deep sense of responsibility for her calling and left her to raise her two younger sisters, one the Keeper of shapeshifters, the other, the Keeper for werewolves.

When a young woman's body is found drained of blood, an apparent victim of a vampire, the murder sparks unrest among the supernatural races, and along with NOPD homicide detective and vampire Jagger DeFarge, Fiona takes responsibility for finding and stopping a killer whose actions could spark another war and make humans aware of the magical creatures that share their world.

While I've enjoyed many books by Heather Graham, I'm sad to say this isn't one of them. The premise is solid and the concept is pretty interesting: a trilogy about three special sisters written by three separate authors. The prologue was nicely done. It set up the world, framing the history and mythology in lyrical prose and starting the book off on strong footing.

Unfortunately, that was the beginning of the end for me. There were too many things that either weren't explained, were explained poorly, or just didn't work. The narrative, while at times lyrical of prose, was repetitive of content, and the dialogue was both repetitive and florid, often lacking a natural conversational cadence.

The suspense plot thread was weak and ripe with cliche, the romance between the lead characters lacked both foundation and development, and the murder investigation aspects were ghastly, seeming to mostly consist of Jagger walking the streets of New Orleans praying a clue would fall at his feet, holding a press conference for the media, or addressing the paranormal community. During the press conference and meeting with the races, the same questions were asked and the same answers given. Every time. It took three deaths before Jagger even thought to tell the crime scene technician that the three similar nightgowns in which the dead girls were found were a clue and should be tested and traced, for pity's sake! That the tech had to be told that at all is disturbing enough, but three murders in it made the "investigation" seem a bit ludicrous.

After the framework provided by the prologue, there was very little fleshed out about the nature of vampires. Several references were made to Fiona to "change" to vampire, but beyond a few times of going to mist, little was explained or described about that change. Jagger is a vampire, but I have no idea how old he is, and his ability to walk around during the day with sunscreen and shades was never explained.

As lead characters they were very two dimensional, and while I liked Jagger well enough despite it, Fiona was just a pain. Inexperienced I could understand, as she's young, but I have a hard time with stupidity, and her naivety and gauche persistence really bothered me as she wormed her way into the investigation with sleuthing skills...and common sense...that left so much to be desired. It also felt like about eighty percent of her dialogue consisted solely of her proclaiming ad nauseum to everyone remotely connected to the supernatural community and the investigation that she was the Keeper. Apparently it's that thirty billionth time that's the charm.

Secondary characters didn't fare much better, and at least one of Fiona's sisters was darn near unlikable with her oft repeated vampire prejudice...and her oft repeated reason for it. Repetition was definitely a theme throughout the book in every facet. I can't tell you how many times it was stated that it had to be a vampire that was killing the women. It must have been. It had to be! It was a vampire (or possibly a shapeshifter, but most likely not). It was a vampire! Uh...yeah.

Perhaps one of the largest of the larger problems, though, is that Graham spent way too much time telling readers facts that were unsupported by the story. Fiona was as strong as a vampire and able to do her duty, but all evidence pointed to the contrary. Jagger was the best man for the investigation and is a very good cop, despite all evidence to the contrary. There was way too much evidence to the contrary in this book about a myriad of things. And what ever happened to the plot thread of the customer who has danger in her future? That was developed, then dropped, but maybe it'll be developed in one of the other two books.

Too many things went wrong in this book for me, to the point that finishing it was far more a chore than it should have been. It was an unpleasant surprise, really, given my previous experiences with Heather Graham's books. Even knowing that two other authors complete the trilogy started here, I'm leery of continuing this series. Neither of the remaining two sisters struck me as any better than Fiona as they were introduced by Graham. That's a shame, because I did like the premise and the concept very much.

Return from The Keepers to Paranormal Romance Genre

Return from The Keepers to OGBDA Book Reviews Home