An Ambitious Debut that Mostly Pays Off 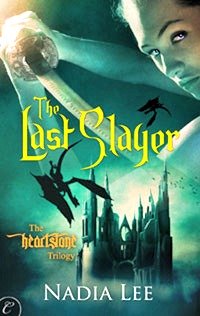 She knew it was a bad idea. When demon hunter Ashera del Cid is told that the CEO of a powerful pharmaceutical company has invited one of the dragonlords to tour his facility and his security team has contracted with her firm to assist them during the dragonlord's visit, Ashera knew it wasn't going to end well. One doesn't just handle a dragonlord, and trying to protect against them is futile. They're just too powerful.

And that's just one of them, so when three of the most powerful dragonlords in the world arrive for their ill-advised tour, Ashera knew someone was going to die. She just wasn't expecting to be forced to kill one of the dragonlords' dragons to stop a rampage. Not surprisingly, dragonlords tend to frown on that. Especially when she uses a spell thought long-lost and no longer able to be wielded to do so.

Ashera has successfully managed to paint a very large target on her back, and she has revealed to deadly enemies a heritage even she didn't know about. With one spell she has become hunted, and only with the help of the mysterious Ramiel will Ashera have any hope of surviving the day...or any other.

But can she trust Ramiel? He may oppose the powerful triumvirate and be willing to ally himself with her, and he says he wants to help her claim the territory that is her birthright, but Ashera is under no illusions. Ramiel may be gorgeous, and he may be one of the most powerful creatures she's ever seen, but he has his own agenda. One that, apparently, requires her presence, as it is Ramiel who gave her the spell that slayed the dragon and it is Ramiel who holds the truth of Ashera's legacy. The cost of either, however, may be more than Ashera can survive.

With a fabulous new world and an original story, Nadia Lee kicks her trilogy off with a bang in this far-reaching debut. Dragons and demons, Sex and hunters, magic and mythology, all woven together into a tale of a young woman finding out the truth of her past as she takes up the fight for her future. The ingredients are definitely all there for some truly epic storytelling.

Ashera is a slick-talking, smart mouth of a heroine who wields sarcasm like a knife. Strong, highly competent, and very self-aware, I can't say she was always likable, but I did find her very interesting and three-dimensional. She handled some major paradigm shifts with a combination of horror, disbelief, and resolve that I found believable, and though she annoyed me a bit at times, and there were some inconsistencies in her character throughout the story, I found her tolerable with a potential for awesome if she continues to evolve.

Ramiel was a tall bite of sexy. He could have easily been pigeonholed as a fairly prototypical urban fantasy hero/love interest type, all alpha male and in-the-know as he brings the heroine up to speed and of course falls for her dubious charms...and to a degree he was exactly that. Lee surprised me with a twist or two, though, and there are a couple of nifty things and revealed secrets about the mighty Ramiel that kind of tempered all of that. It put a bit of a spin on his character that kept him just this side of stereotypical.

Though the book is definitely Ashera's show, Ramiel is a huge part of much of it, and they fit well together most of the time. They have solid chemistry, but their relationship isn't just about romance and hot sex. Ramiel is definitely in the know and Ashera is definitely not for most of the book, so it's not an equal partnership by any means, but the scales start balancing as the story progressed and I was entertained by their repartee and the way they related to each other.

And where can I get my own Toshi? I loved him! Absolute favorite of the non-primary characters. He made me laugh out loud and he was so endearingly cute I just wanted to cuddle him.

Other secondary and ancillary characters were sort of hit-and-miss for me. Some were fleshed out well, others weren't, some had powerful story presence, others didn't. Some were just confusing because I couldn't quite figure out what their game plan was or what impact they were supposed to have in the overall story. I'm holding back my opinions on those, because it's early yet.

I had a couple of issues with some of the story elements, the world-building was not nearly as fleshed out as I would have liked it to be, and the pacing in the middle of the book dragged a bit for me when the action waned. I also got a little confused and thought the plot line got muddled a bit when the quest for the heartstones got mixed in with the visit to Ashera's mother.

I don't think I could imagine a worse name for the energy booster that magic users imbibe to help power up. On more than one level and for more than one reason. It's bad enough that it's mysteriously harvested magical energy generated by copulation (explains the name but doesn't excuse it). It's in a viscous liquid form that they drink, and it's described as being none-too-palatable in taste. Despite artificial flavor additives, apparently.

And every time I saw the capitalized Sex I couldn't help but think of a Red Bull advertising campaign for ectoplasmic ejaculations. Gross.

There was certainly a lot of story being told in this series opener. I don't know how, or even if, it's all going to connect yet, but that's not critically important at this stage. What is important is that enough went right with the story to keep me interested and the characters were likable enough to keep me invested. The potential is definitely there for a rich, widely expansive and impressive tale that reaches epic proportions. I'm going to hang around to see if it all comes to fruition (Sex notwithstanding).

Return from The Last Slayer to Urban Fantasy Titles

Return from The Last Slayer to OGBDA Book Reviews Home