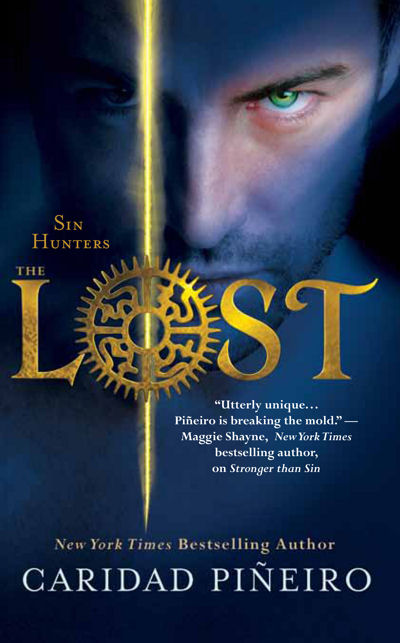 Disclosure: An ARC of this book was provided to me by Forever via NetGalley. The rating, review, and all included thoughts and comments are my own.

He doesn't know his name, though the man who raised him, the man he considers his father, calls him Adam Bruno. He doesn't know what he is, though he's seen and tested several of his own supernatural abilities, including shape changing and harnessing electricity. He doesn't know where he came from, not since waking up in a small room as a child of five or six, battered, bruised, with no memory of his family, his people, his race.

And he has no idea at all that he is lost.

Adam's abilities and the danger they possess have always kept him isolated, but his genius mind and head for business has brought him success at an early age. Now a millionaire with his own company, his life seems to be running smoothly, until the energy inside him starts to grow alongside a gaping maw of loneliness snapping at his soul. Dealing with it the only way he knows how, by tamping it down and pushing it back, he feels like his vaunted control is starting to slip. Then, as he leaves work one day, an apparent kidnapping attempt takes him by surprise, and only his abilities...and the surprise help of a beautiful if damaged woman...save him from two men who seem to be just like him.

Bobbie Carerra felt drawn to the stranger as soon as she saw him leave the building in which her brother is interning. As a highly decorated, if horribly wounded, U.S. Marine, when she saw him get jumped in broad daylight, she didn't think, just swung her injury-riddled body into action and, using her cane, helped the stranger fight off the two thugs intent on getting him into their van. Once he was safe, the thugs gone, he touched her, and nothing would be the same for Bobbie ever again.

They're drawn together by a force they can't explain, but with a connection neither can deny comes a danger that neither, regardless of race or ability, may be able to escape. Adam is lost. But being found may be the greatest threat of all.

It's a rare treat to come across a book as original in concept as this one in a very well-worn paranormal romance subgenre. This is my first read of a Caridad Piñeiro book, so I'm unfamiliar with the series that this one has been spun from, but that didn't pose much of a problem in the book, and I was pretty darn interested in the world and characters that Piñeiro had created.

I was thrilled with the first half of the book. I loved the ideas presented, and Adam and Bobbie were great characters. I can't think of a female lead in recent books I've liked more than Bobbie. Her wounded war veteran backstory was creative, intense, and believable, and she proved herself time and again as a steely-spined warrior with dedication, intelligence, and passion. I loved her. Adam was good too, but he was a slightly more traditional the lead male in a PNR, equal parts alpha male, and vulnerable boy, despite...or maybe because of his completely unique abilities.

The evolution of their romance was my favorite part of the book, because unlike most in the genre, it directly addressed some of those annoying and oft-used conveniences in plot devices like the instant, undeniable, and primal attraction, the speedy growth of a relationship, the amped up sex drives, etc. The ways in which these issues were addressed, and subsequent concerns resolved, struck me as thoughtful and creative, and ultimately lent an air of believability to it all.

The second half of the book was where I started to have problems. I think the book started to drag for me when there was no real plot progression in the non-romantic plot arc until about three quarters of the way into the book. Answers were long in coming for Adam and the reader both, and I found the actions of his parents to be utterly perplexing in connection to their search for him. Add to that, several things about both the Light and Shadow Hunters didn't make a lot of logical sense to me, conceptually, including their origins and the war between them. Some of the behavior of the Light's guard seemed to countermand the direct orders from Adam's parents, and their lying about it made me question who were the good guys and who were the bad, especially when Salvatore's long term goals came into play.

Actually, Savatore's character was a bone of contention to me throughout the book, and the intent of his Genesis project left me feeling befuddled. He was a CIA agent, not a scientist or a geneticist. Even if there was some significant setup for his character or that plot thread in Piñeiro's previous series, neither were well defined in this book and served no purpose beyond further muddying up a plot that was already bordering on convoluted. His scenes were awkward and uncomfortable, his actions and dialogue stilted, and his motivations murky. Even the conflict he stirred between Adam and Bobbie felt contrived and overdone, and the fallout of it seemed a poorly orchestrated plot device.

I have to admit, parts of this book left me feeling a little lost. Had it not been for several points in its favor, I wouldn't have liked it at all. I can't deny, though, that the originality of the story concept and the unique mythology presented, combined with a very strong, thoroughly likable female lead and one of the better-written romance threads (prior to the formulaic conflict) that I've read lately were all very strong pluses.

I'm interested to see what comes next for the series. There seems to be a lot of gray area to play with. I wasn't convinced by the events in this book that the Shadow Hunters are the irredeemable bad guys. Obviously there is a struggle to survive and the subsequent war, but just about everyone but Adam and Bobbie seemed to fall somewhere between being morally ambiguous and pretty heavily corrupted. Only one of them seemed truly evil. In that regard, Piñeiro has created a very complex, dark world with real conflict and difficult choices. I applaud her for that and hope for a more streamlined plot to help further that world and delineate her intentions for the series - and maybe an explanation for the series name would be nice, too.

Return to top of The Lost