The Mage in Black 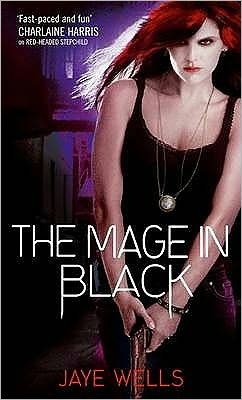 The Mage in Black, book two of the Sabina Kane series, picks up where Red-Headed Stepchild left off (picks up with a bloody vengeance, in fact), so if you're new to the series, you'll be missing a lot if you don't read that book first. Yes, you could read The Mage in Black as a stand-alone, mostly because the plot of this one isn't directly related to the plot in the first, but the characters and backstory are important enough that I wouldn't recommend that route.

Sabina is off to New York City (the Big Apple as the major seat of mage power when "the forbidden fruit" is so deadly to vampires...coincidence?) to meet the twin sister she just found out she had, but that's not the only reason she's going - she's not that sentimental - she's also going because she's burning with the need to stick one to dear granny Lavinia, the lying, scheming, bitch of a grandmother and head of the Dominae council...and the one woman almost solely responsible for turning Sabina into little more than a conscienceless, fanged weapon. And nothing will get granny's panties in a bunch quicker than Sabina going over to the dark side and forming an alliance with the much-hated mancies, a vampire's most reviled enemy.

But life in NYC isn't what Sabina was expecting and soon she's in over her head, feeling lost and totally overwhelmed by a mage philosophy she can't understand and politics she doesn't want any part of. To top it off, someone is still trying to kill her...but she's sort of gotten used to that by now. Will Sabina be able to warm to her long lost family and embrace her half-mage heritage...or will that heritage blow up in her face and take her down, along with everyone she's just starting to care about?

There are a lot of things about The Mage in Black that I enjoyed. The plot is stronger and considerably less convoluted than Red-Headed Stepchild. It starts fast and bloody and keeps a nice, hectic pace, with just enough humor throughout to be entertaining. There were some lulls in the action that felt very organic to the story and instead of bogging down the plot or pace, gives the reader a bit of a breather and Sabina a chance for a bit more much-needed character growth. A few of my favorite characters are back, Giguhl, Sabina's demon familiar, in particular, and the yummy mage Adam we meet in the first book. There is quite a nice subplot with Giguhl that I liked very much. The addition of a few interesting characters, including an old frenemy of Sabina's, was nice and added depth to the plot as it also developed the world in which these characters inhabit. That's a good thing, as I felt the first book a bit lacking on world-building and what was there was dished out sort of haphazardly. Not so here. I felt the world really start to snap into focus in The Mage in Black, and I very much appreciated an introduction to some of the other dark races.

One of the things I neither liked nor particularly understood in Red-Headed Stepchild was the religious aspect of the Dominae - I felt it an odd mythos that wasn't very well explained or described - so it was nice not to have that problem in this book, as I was worried the mage culture would be similarly structured. It wasn't, so I was happy.

My only significant issue with The Mage In Black is actually one of the things I had a problem with in the first book: I'm not sold on Sabina. I didn't like her very much at all in the previous novel, and in this one, while I saw strides towards growth and healthy development, and a satisfying lessening of her inner sociopathy, none of that came quick enough in the book for me to really warm to her as a character. I understand and am familiar with a character's development through an arc of a series, so I'm tentatively okay with not being very fond of her at this point in the story, but it does lessen my enjoyment of reading about her. Not enough to stop reading by any means, but enough that this book isn't a five star read for me.

I have to give Jaye Wells credit, though, as she's deftly able to maintain a complex and damaged character who isn't very empathetic, who has a huge morality issue and a tendency to ignore, distrust, or doubt every ounce of kindness offered to her. Wells is showing the growth of her heroine in fits and starts, and while I may not like Sabina all the time, I find that change and growth to be realistic and well-written, and think the motivations behind Sabina's feelings and actions are sound. I hope to see continued development in the character in Green-Eyed Demon, Book Three of the Sabina Kane series, when it is released.

Return from The Mage in Black to Urban Fantasy Genre

Return from The Mage in Black to OGBDA Book Reviews Home