The Mountains Bow Down

Solid Suspense in a Phenomenal Setting 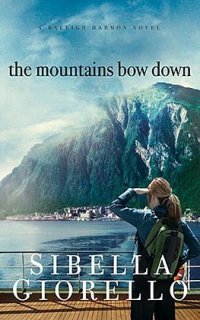 Disclosure:   This book was received for free through Goodreads First Reads for the purpose of an honest rating. All ratings, comments, thoughts, and opinions expressed in this review are my own.

FBI Special Agent Raleigh Harmon needed this vacation, but she sure didn't need to get stuck on a ship with 2,000 other people invading her personal space. She's nearly desperate to get into the Alaskan port of Ketchikan and take a hike in the most beautiful landscape she will likely ever see, finding rocks and minerals to add to her collection in this geologist's paradise. Then a trio of deep, bellowing sounds shatters the air and further wrecks her already stressful vacation; three long, deep horn blasts that signal the ship's return to sea. At their mercy, Raleigh watches her hopes for some time alone disappear just as fast as the Ketchikan coastline.

Before she has time to grieve the lost opportunity, the body of a woman presumed lost overboard is found hanging from the side of the ship, and despite the cruise line's official leap to a label of suicide, Raleigh's forensic experience is telling her that there are too many inconsistencies, too many problems with the scene and the evidence to assume the woman's death was anything but murder.

What had been intended as a family vacation with her ailing mother, her aunt, and her aunt's best friend has turned into a high-profile homicide investigation of the producer of the Hollywood film production that had hired her aunt to provide some spiritual assistance to the cast and crew. And as the ship returns to its scheduled route, Raleigh has to deal with the grim knowledge that though the suspect pool is limited to the crew and passengers, the secrets and lies swarming around the crime go deeper than the ocean on which they sail. And she has until the end of the cruise to solve the case before the murderer disembarks and disappears forever.

With a sweeping panorama painted by the words of a true authorial artist and a layered plot of mystery, family crisis, personal challenge, and tests of faith, Sibella Giorello brings readers into the life of Raleigh Harmon and delivers a solid mystery that was thoroughly entertaining. This is the first book I've read by Giorello, and I don't intend it to be my last, and frankly, that surprises me. For several reasons, some of which are personal, I'm not a fan of Christian fiction and I tend to avoid it, but I received this book for free through Goodreads First Reads program before I realized it was Christian fiction.

I'm more than a little in love with both Giorello's writing style and her characters, who were all so wonderfully three dimensional and real. Raleigh is a character with the most interesting flaws, but she's also strong, fiercely intelligent, and dedicated to a job that occasionally tries her faith and pushes her into compromising her ethics. Her mother's mental illness weighs on her heart and the actions she takes to protect her mother...and herself...aren't always honest, but she owns them. She's occasionally surly, judgmental, and a bit hot tempered, and she's not exactly dealing with her fiance in the most emotionally mature ways, but she's got the admirable ability to look into herself and acknowledge her flaws. Even when she's not necessarily so willing to work on rectifying them. I found her refreshingly easy to relate to and completely sympathetic as a heroine, despite some differences in ideology. In fact, I just flat-out liked her. And I loved, loved, loved Jack.

I'm guessing Raleigh has had a few contentious run ins with Special Agent Jack Stephanson in previous books, because their chemistry had a weight and feel of history to it that speaks loudly of previous development. As I have every intention of continuing this series, I can only hope their relationship continues, because I'm a romantic at heart and I think Jack's much better suited for Raleigh than her childhood sweetheart, no matter how nice a guy he may or may not be. Maybe I'm biased because I started the series here, but the synchronicity between Jack and Raleigh is totally entertaining and made a good story even better. I was particularly happy with Jack in that he adds some touches of levity to the story, lighting up the occasionally too-serious Raleigh, and providing the opportunity for some wonderful witty repartee.

Admittedly, geology, rocks, and minerals aren't really my thing, so there were points in the story when my mind started to wander or the story dragged a bit when Raleigh was hitting the geological high points, and I do wish the suspense and mystery aspects of the plot had come with a few more suspenseful moments. I was deeply moved, though, by Raleigh's struggles with a mother who sees her as a villain, and sympathized with the feelings a child has when she realizes that she's been thrust into the role of being a parent for a parent. I was also deeply grateful that while Raleigh's faith was evident in places throughout the book, it was also quite obviously personal and subtle woven into everyday aspects of her life, seeming more genuine for it, and thankfully, totally lacking in proselytism.

I'm ever so glad to have made the mistake that brought me the gift of Giorello's deft and accomplished storytelling and got me hooked on Raleigh Harmon and her series of crime solving mysteries. I am thoroughly and anxiously looking forward to finding out what comes next for Raleigh, her family, her fiance, and of course, Jack.

Return to top of The Mountains Bow Down by Sibella Giorello

Return from The Mountains Bow Down to OGBDA Book Review Home