The Night is Mine

An Action-Packed Free Fall into Danger and Suspense 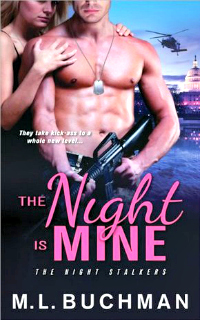 Captain Emily Beale may have been born to fly, but she chose to both be the best and fly the best. She's the only woman to ever qualify to fly with the Night Stalkers, the Special Operations Aviation Regiment (SOAR), flying Black Hawk helicopters in combat in service to her country. In achieving that goal she's fought tirelessly to be perfect, to fit into a world where only men dare tread, fighting more than a war - battling stereotype and prejudice just as fiercely.

She is a triumph and a credit to her country. It's all she has ever wanted to be. So when Emily is suddenly pulled from her division and brought stateside for a security detail that equates to little more than babysitting the First Lady of the United States, Emily is...less than happy for several reasons. Not the least of which is that she can't turn down a direct request from her Commander in Chief, even though she grew up with him.

Still, she's not the only one fuming over her new assignment.

Major Mark "Viper" Henderson is furious when his best combat pilot is yanked from his command by his superiors without so much as a by-your-leave and little in the way of explanation, apology, or information. He respects the hell out of Beale's skills with a Hawk and there isn't another pilot he trusts more to get the job done. Her reassignment will create a hole where her talent once shone.

And he shouldn't have kissed her. That wasn't the brightest move he's ever made. Not only because it was the height of impropriety and broke several significantly punitive regulations, but because it was motivated by a painful ball of frustration, fear, and fantasy that he's worked hard to keep under wraps. Plus, now that he's tasted her, felt her against him, he has memory to add to his dreams and imagination. Memory of the woman he loves and can never have.

He shouldn't have kissed her. But despite knowing that to be true, it doesn't stop him from digging to find out where she's been sent, and it doesn't prevent him from calling in every favor he's owed to rush to her side when he gets word that she's in trouble. Not even the mighty force of the U.S. military can keep him from her when he finds out there's a killer out there, one who sees Emily as nothing more than collateral damage. And very expendable.

I debated reading this book. Prejudice almost had me dismissing it out of hand. I'm sad to say I don't have a lot of trust in male authors when it comes to writing romance fiction that works for me. I have my reasons. Combining those reasons with a lack of interest in the military elements of this story made me more than a little leery to pick this up.

From the opening scene, I adored Emily. What a perfect way Buchman had of slamming his readers into her life and addressing head-on several of the very prejudices and unlikely conveniences that would make this book more than a little implausible in both concept and construct. And it was implausible. Almost ridiculously so on more than one level throughout the book, if not downright impossible without resulting in several criminal charges and possibly a court-martial or two.

I had no illusions about that when I was reading. Come on, the list of highly unlikely events, circumstances, defining moments, and character traits stacked up higher than the Washington Monument. It was just such a kick-ass read I couldn't find it in me to care overmuch. Seriously, I know I should have cared, I know I usually do care, but in this book I enjoyed the read despite it all (though it did affect my rating).

It was Emily and Mark. I loved both of them. Emily from the moment she shoots the laptop and Mark from the moment he showed up and spent the night in absolute silence. Okay, okay, I entertained lusty, deliciously impure thoughts about his fine self long before that, but that's when I fell in love with the guy. And together? Now that's what I call chemistry.

The story was great, too. Taking the book at face value, the characters were layered and nicely fleshed out and the plot was complex and had nice balance. The romance threads were laden with emotion, tension, and passion, with some impressive areas of genuine relationship conflict from both internal and external forces.

The suspense was solid throughout the book, but faltered a bit for me during the revelation stages of the conflict resolution. The motivations and disclosed endgame of the characters involved didn't exactly wow me with its Master Criminal-level of intellect. Seemed an awful lot of high-risk gyrations to go through to end up in mostly the same place, really. But that didn't detract from how pleased I was with the main characters' journey in uncovering the truth. Very nicely done.

Let me be honest, I still have that prejudice about male authors writing romance to my taste. It's long-standing and dug in through years of personal experience. Not much I can do about that. There is one thing I plan to do, though...read the next book in The Night Stalkers series when Buchman has it available. Call it my civic duty or something. That works. 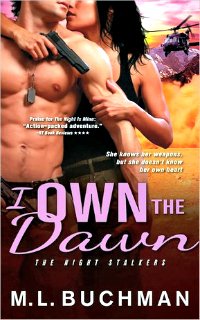 Return from The Night is Mine to Romantic Suspense

Return from The Night is Mine to One Good Book Home