A Flight With Some Turbulence 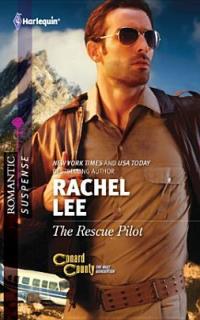 Disclosure: An ARC of this book was provided to me by Harlequin Romantic Suspense publisher Harlequin via NetGalley. This rating, review, and all included thoughts and comments are my own.

It took all of ex-military pilot Chase Dakota's remarkable skill to bring that small plane down on the side of the mountain after the engines cut out on him while in flight. And more than a little luck that everyone survived the crash. He and his passengers aren't out of the woods yet, though. A deadly winter blizzard is moving in over the Wyoming mountainside they're clinging to so precariously, and on board the downed plane is a terminally ill young woman with a very desperate older sister.

Rory Campbell has only four days of medicine for her sister Cait and has to get her to the hospital back east. Cait is dangerously close to losing her fight with cancer, and the drug trial they're flying to is really their last hope. Being stuck on the side of a mountain in a broken plane as a blizzard threatens to toss them right off the slope is doing more than just lowering her sister's chances of survival. It's obliterating them.

Rory is terrified, furious, and single-minded. A taut string pulled tight over the dangerous chasm of grief. She couldn't blame Chase for the crash. Without him, they wouldn't even still be alive, and he's been kind to her and her sister both. In fact, he's a surprisingly comforting port in an unimaginably tempestuous storm. It's no wonder she's feeling stirrings of attraction for the man. He's been a hero so far.

But he'll need to be a miracle worker to get them all off that mountain alive.

I liked the premise of this book so much. The suspense inherent in the plotline was ripe for plucking. Unfortunately, it fell a little flat for me, even though I felt for Cait's condition and thought Lee did a great job fully developing Chase and Rory as characters. Their backstories were fully developed and three dimensional, clearly defining who they are and the decisions they make as the story progresses.

I wasn't as fond of how soon their physical intimacy developed in the story. I've always had a problem with the conflict between attraction and desire in the face of life-threatening catastrophe. I'm probably projecting my own issues there, because being scared or stressed, or stuck in a situation that dire, doesn't inspire in me the need to get groiny, but it is what it is.

There were also a few things that bothered me about the suspense elements of the plotline. The pieces were definitely all there, but the surrounding story watered them down a bit too much for me. The pacing was slow, first of all, which worked for the main characters' evolving relationship, but did little to keep the tension high. Also, parts of the story were more talk than action, even in situations where survival was at risk. There was some repetition in various passages featuring characters thoughts and inner monologues, too. None of the issues were horrible, none made me hate the book or dislike the story, but it definitely kept the tone of the story more on the low key side of life threatening.

The romance arc progressed fairly well, for all that. Even with as quick as it got physical, there was a nice amount of the story dedicated to the characters getting to really know one another, so the romance felt natural to the characters and their situation. The romance arc did go a little wonky for me at the end, with an abrupt relationship conflict that came out of nowhere and an equally abrupt resolution after an odd, sudden leap in the timeline. It smoothed out nicely enough, though, as the characters got their HEA, and I liked the ending quite a lot.

Overall, I liked the plot and appreciated how comprehensive the plot elements were surrounding Cait, her illness, and the grim physical reality of late stage terminal cancer. Secondary character development and involvement was oddly limited given the nature of the setting, though, and of course, the lack of sustained tension in the suspense elements were a bit of a disappointment. Mostly, I wish the story arc had been given a broader timeline, so less time was spent in the plane (with the conversation excesses) and more on all the other potential suspense elements that didn't get as much attention. As is, it wasn't a bad read, but it didn't reach as high an altitude as it could have after liftoff.

Return from The Rescue Pilot to Romantic Suspense

Return from The Rescue Pilot to OGBDA Book Reviews Home