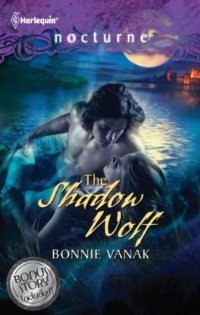 Disclosure: An ARC of this book was provided to me for free by Harlequin via NetGalley. The rating, review, and all thoughts and comments therein are my own.

Her kind is feared and loathed by the Draicon werewolves, rounded up and enslaved on an island of rigid controls and inhumane treatment. Shadow wolf Megan Moraine will risk her very life to get her twin seven-year-old cousins off their island prison and to New Orleans, grimly determined to get them to the one Draicon who may be able to give the two little shadow wolf girls what they need most, a father. To do so, she has to make contact with the underground group that helps her kind and get the girls to one of their safe houses while avoiding discovery and staying away from the Enforcers, Draicons who hunt and sometimes kill shadow wolves.

No sooner have the bedraggled and scared trio made it to a safe house than the most feared and violent Enforcer of them all strides into the hotel restaurant where Megan and the girls are shakily eating the first real meal they've had in days. Terror grips Megan and, desperate to get the girls to safety, she tries to get them out...only to end up captured by her worst nightmare, Gabriel Robichaux.

Gabriel knows that Megan has every reason to fear him, but not for the reasons she thinks. He is both her ticket to freedom and a deadly threat. One scent and he realizes she is his destined mate, but Gabriel's secrets are deep, deadly, and a danger to everyone he cares about, especially a feisty shadow wolf who has put her life on the line for her two innocent cousins. When a dark force of unmitigated evil blows Gabriel's plans to hell and ups the ante on an old vendetta, Gabriel has to rely on the monster inside him to keep his mate and wards safe...but revealing himself and displaying that darkness in his soul may very well damn them all.

One of the most frustrating things for me as a reader is coming across a book with all the right plot points, full of fascinating and thrilling story elements, set in a unique world with plentiful danger, genuine threat, and likable characters that have lots of chemistry, only to have all those great pieces, for whatever reason, fail to come together in a cohesive whole that provides an entertaining read. Sadly, such is the case with Vanak's The Shadow Wolf.

I thought part of the problem may have been that this was my first foray into a well-established Draicon Wolves series, and given that this is the tenth story (including a mix of novels and novellas) that has been released in the series, it wouldn't have been a stretch to lay the blame there. Then I visited Vanak's site and read that each of her stories can be read separately and in any sequence, which indicated to me that they were, essentially, intended as stand-alone books in the same world. So the problem isn't my late arrival into a previously explained and well-established world.

Keeping that in mind, I ordered my thoughts. The Shadow Wolf failed for me on three different levels. The first is perhaps the easiest. There just wasn't enough exposition to explain in a comprehensive fashion not only the world of the Draicon wolves, but their history, abilities, and their mythos as a species and as a part of the human world around them. The world-building was severely lacking on all fronts. Of course, it's a shorter-length novel, so part of that, I guess, has to be accepted, if not liked. Still, I was so impressed with the elements I could glean from the storyline that I yearned for more and would have happily sacrificed a sex scene or two to get more detail about the world.

That, though, led me to the second major issue I had with the book. The storyline was crammed with plot points and raced through them all at high speed. Sure, the points were fascinating and juicy with conflict, but they raced by so fast, there was never time to thoroughly develop and flesh out any of them. I spent most of the book wondering not only what was going on, but why, and when did it all start, and how it got to that point, and so on, and so on. In short, none of my most pertinent questions got answered in the mad dash to fill the pages with multiple conflicts. One major conflict is enough for a book, especially of this length, when it's developed completely and layered with character definition (lacking here) and a romance plot thread (not lacking, but could have been better developed). I would have happily embraced a pared down novel with plentiful detail.

Thinking about plot development led me to the third and final major area of my disappointment in this book and presents the most dangerous and encompassing issue of all. Using both stories featured in this book as a yardstick, it's obvious that Vanak tends to rely far too heavily on telling the reader about story elements as opposed to showing them to the reader as they occur. That's a very prevalent bad habit in fiction, and it's such a shame, because it really keeps the reader at emotional arms length from the characters. For example, telling readers about Megan's traumatic trip off the island via dialogue between the main characters drains the scene of its emotional impact and tosses away a golden opportunity to build a rapport and sympathy between character and reader. Too many opportunities got tossed here. In both titles featured in the book.

Speaking of Darkness of the Wolf, and I suppose I should, I'll say this: while the issues I've mentioned are also in evidence in this story, the shorter length and narrower focus of the novella lessened their severity. Were I rating it on its own, I'd probably rate it as three stars. Given the story line, though, I question its inclusion in this book. There were too many similarities in theme and plot to The Shadow Wolf, and because it was only the second story I've read in the series, and it followed the featured story here, it ended up seeming more like a shorter rehash of what I'd just finished reading. That did no favors for the book as a whole.

Vanak has a gift. She's created this fabulously dark world full of complex politics and a precarious social structure and peopled it with emotionally complicated magickal characters with imaginative powers. She writes lusty characters with the sort of emotional wounds that make a paranormal romance book shine. And I can't even begin to tell you how frustrating it is to recognize it and realize that far too much of it didn't make it into this book in as richly developed and thoroughly explained a format as it could have. Unrealized potential. The bane of every avid reader.

Return to top of The Shadow Wolf