The Stranger You Seek 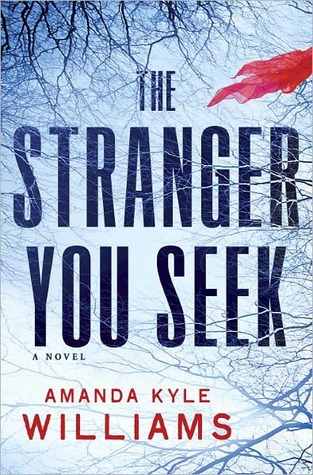 Disclosures:   An ARC of this book was provided to me by Bantam publisher Random House Publishing Group via NetGalley. This rating, review, and all included thoughts and comments are my own.

As the heat of an Atlanta summer grips the lungs and rakes the skin with its searing, humid, punishing talons, a chilling crime robs a child of a mother in the basest, cruelest of ways. Death stalks city streets and a conscienceless killer saunters through the shadows of its wake, leaving nothing but broken bodies, grief, and blood.

Ex-FBI profiler Keye Street doesn't work these kind of cases anymore. Not since her addiction to the bottle torpedoed her career and a stint in rehab did away with most of the rest of her life, husband included. Now she makes her money the old fashion way, as a diversified licensed private investigator, handling everything from corporate investigations to unfaithful spouses to bail jumping. Whatever pays the bills and keeps her mind off her persistent, unrelenting thirst.

It isn't until her best friend and Atlanta Police Department lieutenant Aaron Rauser gets a taunting, insidious letter from the killer that Keye is asked to lend her expertise to the kind of case she trained for, learned for, excelled at before alcoholism triumphed over her in such grand and uncontested style. Sheer force of will and gritty determination keeps her dry, but the lure of deciphering the clues and digging deep into a killer's maniacal intent to rain slaughter down on innocents ups the ante.

Dodging professional landmines and tap dancing around protocol and procedure is easy. Finding a killer who leaves no clues and has no apparent pattern, even as the body count rises...that may actually be the death of her. If the strain of the investigation doesn't tip her back into a bottle first.

I love psychological thrillers. I love southern mysteries. I prefer my heroines to be strong as steel but flawed, smart but human - foibles and sins and fears and insecurities and everything else all rolled up into a fallible, sympathetic package. Having each of those loves and preferences wrapped up in an exquisitely crafted tale of murder and humanity and struggle and heat...woah. Happy reader here!

It's all about Keye Street. What a fabulous combination of flaws, peccadilloes, and keen intellect she is. Brash, a little intense and fearless, a little broken and self destructive, a little irreverent and corny, a little snarky, she's just a great heroine. With a narrative that's told from her first person point of view, this book depended on her being a solid heroine. Williams knocked it out of the park for me. I loved her. I can't wait to revisit her quirky internal monologue and view of the world around her. Even the moments when she was a bit too human, a bit too flawed to be totally likable, she was still very realistic and utterly believable. Hands down she's the best female lead in the Thriller/Suspense genre I've read all year.

And then there was the story she's living. Parts are chilling psychological thriller, parts charming southern mystery, parts are pulse-pounding action and suspense. It's all around satisfying. Williams' writing paints just as keen and sharp a picture of Atlanta and life in the south for a woman of mixed heritage, traumatic childhood, and painful past as she does of malignant sociopathy and murder. The subtle foreshadowing and deft control of meager clues in the search to discover a killer's identity and motivations were damn impressive, especially at the end of the book when, looking back, I had a clearer picture of how all the pieces fit together.

One aspect of the book in particular was either brilliantly premeditated or phenomenally coincidental - I still don't know if I was imagining it or if it was intended, actually - but I'm loathe to detail it and risk spoiling any aspect of the conclusion. The flip side is that I'm equally loathe to detail the two issues I had with the story that kept me from fully loving it in its entirety. Conundrum.

As delicately and as ambiguously as I can, I'll say this: there was an abrupt change in the relationship between Keye and Rauser. While I liked that change, I can't say it felt organic to the characters at that point in the story. The groundwork was actually skewed a little in the opposite direction, so it took me by surprise. Beyond that, the events that immediately follow that surprise were such that it made me feel like that change in relationship was a bit contrived to maximize emotional impact.

The second issue, and the larger of the two, I can say even less about without being too revealing. All I feel comfortable saying is that an aspect of the big reveal was very disappointing to me because it seemed to contradict information (arguably suspect and incomplete, I admit) gleaned from a lifetime of fascination with true crime documentaries, crime solving shows, and armchair psychoanalysis of aberrant psychology. I'm not saying that there is a contradiction, just that what I read conflicts with what I believed true about the depths of depravity mankind is capable of sinking to in similar circumstances.

Even with those issues, though, this book was a hell of a fun ride. I thoroughly enjoyed Keye Street and her band of merry accomplices (aka secondary and ancillary characters) and can't wait to read more about her, see how she continues to deal with her demons and the changes her life has gone through. Combined with Williams' ability to fold the Deep South up into a novel like a juicy, ripe peach and the devastatingly wicked way she pulls the flap back on the psycho murder box of crazy, I can only imagine where Keye's life is going to take her next. Can't wait for the ride.

Return from The Stranger You Seek to 2011 Book Reviews

Return from The Stranger You Seek to OGBDA Book Reviews Home