The Summer He Came Home

Bad Boys are Back in Town 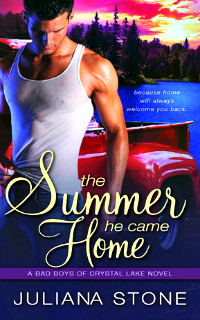 A decade after putting his hometown of Crystal Lake in his rearview mirror, tragedy has drawn rock guitarist Cain Black back. One of his best friends is dead, a grim statistic of a war on foreign soil, and Cain has returned to mourn and pay his respects.

And because his own life is in shambles and he could use a break.

One of the first people he sees at the reception after the funeral is Maggie O'Rourke, single mother and redheaded temptress. Not that she's trying to be. In fact, the fiery beauty makes it quite clear that she wants absolutely nothing to do with Cain and would be perfectly happy if he would disappear off the face of the planet entirely.

Not that one of Crystal Lake's former Bad Boys is going to let that stop him. In fact, he's thinking he may as well stay in town for awhile, because there's just something about Maggie that reaches out and squeezes him hard - in all the best places. What surprises him the most, though, is there's also something about the shadow's in her eyes, the wariness and caution, that makes him want to slay her dragons.

There is absolutely no doubt in Cain's mind that the ethereal but haunted Maggie O'Rourke has them.

Maybe I should've stopped before I started this book. It's not a bad romance, and there were parts that really worked for me, but overall I had too many issues with it and some of those issues started early. When the book opens there are several melancholy scenes surrounding the death of one of Cain's best friends. It set a darker tone than appealed to me. I almost put it down at that point, not because it wasn't well written, just because I wasn't really in the emotional place to want to deal with it.

Still, I kept reading, and I was relieved that at least the melancholy waned relatively quickly.

I thought it was going to be good from that point. I liked Cain, even though the rock-n-roll romantic hero isn't a favorite of mine. I liked Maggie, too, even though she's a single mother and that theme also isn't a favorite of mine. I loved her son Michael. I absolutely adored him. More, I was completely and thoroughly enamored with the depth of love in the relationship between mother and son. It was one of my favorite things about the read.

Cain's relationship with Michael was another huge high point. It never once felt forced or awkward, or a footnote just to appeal to readers. It felt truly organic to all the characters involved.

The plot didn't break any new grounds, which normally isn't a huge criticism of mine. It's contemporary romance, and as a fan I expect some formula. Still, there could have been more depth and the last fifteen to twenty percent of the book was almost painfully predictable. I saw the conflict climax coming from the moment Maggie's past is revealed. Other story elements and character choices did provide pleasant surprises throughout the narrative, so I was disappointed that the end truly didn't.

And I began having a problem with Maggie late in the book. She's a very secretive person. Her past is filled with trauma and as a result she doesn't share anything about herself or that past. At all. With anyone. For awhile, I was fine with that, but the longer she was in the relationship with Cain and the more he opened up to her without any reciprocity, my struggles with her character grew. Because she was such a closed book with everyone, even her closest friend in town, I began to have a very hard time maintaining an emotional connection to her character.

That's when it became more than frustrating, it became detrimental to the story.

I also had trouble with the scenes that featured shifting points of view in a congruent timeline. It's a narrative style that rarely works for me because it can and does breed timeline inconsistencies like the one that occurs during the book's climax. For a detail-obsessed reader like me, those sorts of inconsistencies completely derail an intensely suspenseful or emotional scene.

Also, I know he was a secondary character and so not a tremendously big factor in the main story arc, but I had a huge problem with Jake. I don't care how close a friend a person is, or how long our history, if I hear them speaking to another friend of mine (and in this case a grieving widow) the way that Jake speaks to Raine in this book, I'd have his guts for garters. I was infuriated that no one deigned to address it or even made an attempt to rein in Jake's increasingly unconscionable behavior towards that poor woman.

There were just too many things that went awry for me in this book. And I had a lot of unanswered questions, which is uncommon for me in this genre. Unfortunately, they're the sorts of questions that can really compromise the effectiveness of a romantic resolution. Like...is Maggie still married? If not, when, exactly, was her divorce final, because unless I missed something, the way the scant details were divulged, there didn't seem to have been time and she sure didn't seem to have opportunity.

Between of those sorts of questions and my other issues, it was all just too much for me to really enjoy this read. The characters, especially Cain and Michael, were completely lovable, and I even liked Maggie throughout most of the book. And even with my issues, I thought a good portion of the romance between her and Cain was very sweet and incredibly hot.

Maybe with some distance I'd give a second book in this new series a try, but if Jake's going to be the male romantic lead in that one, I'm going to have to wait for awhile to see how the reviews shake out first.

Return from The Summer He Came Home to Contemporary Romance