Not Just Sweet - Salty and Sexy, Too 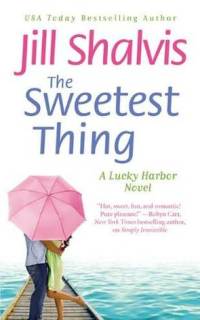 She may look like a Southern Belle who has it all together, but only Tara knows just how tightly she's wound inside. Being back in Lucky Harbor, the site of the most painful time in her life, has tied her up in knots since she showed up six months ago following the death of a mother she never really knew. Now Tara is working herself to the bone with her two half-sisters, one a veritable stranger and the other a wild child she's tried and failed to control, just trying to get their jointly-owned Inn up and running so she can wipe her hands of the place, the town, and the man who was once a boy who meant everything to her.

Ford has worked hard for the easy, uncomplicated life he leads. He owns a bar with his best friend, races his boat when he feels like it, and never wants for female companionship. Ever since Tara breezed back into town, though, and set about patently ignoring him and their painful past, Ford has been uncharacteristically unsettled and suddenly yearning for things that are completely foreign to him. He let her go seventeen years ago because they were just children when she got pregnant, and giving up their baby, giving him up and running away, had been what she needed to do. He was no good for her then. He isn't any better for her now.

But his mind and his heart disagree on that one. Vehemently.

Getting her back in his arms may not be the right thing, but for Ford, it's the only thing that matters, and when Tara's ex-husband shows up intent on reclaiming his wife, things in his noisy little town take a turn towards the absurd. Soon there are Facebook updates, Tweets, and pictures posted, and everyone in town is voting in a poll to see which man Tara chooses. He's betting on himself, but unless he's betting for forever, Ford could very well lose the only woman who ever mattered.

Almost as charming as its predecessor, Simply Irresistible, Shalvis has brought her readers back to the quirky seaside town of Lucky Harbor and reaquainted us with the three sisters who have come to put their mark on the place and make lives for themselves...even if it is against their initial intentions. In the first book, we got to see Maddie, also known as the mouse, find her roar, and in this one it's up to Steel Magnolia Tara to let go of some of her world-class control issues and embrace her vulnerabilities if she's going to find happiness and peace in her life.

I've got to hand it to Shalvis, she has a gift for creating contemporary romances that are light, flirty, and sassy, that have some humor and a dash of absurdity, that heat up the sheets and redden the cheeks...but that also touch upon serious and significant issues along the way. The emotional damage and detritus from teen pregnancy and ramifications of giving up a child for adoption were handled deftly and as realistically as could be given the tone of the book. Like with Maddie's past abusive relationship, the issue added depth and complexity to the plot and the definition of the main characters without dragging the book into maudlin territory.

I didn't feel Tara was as likable a character as Maddie, though. Normally I'm a huge supporter of the strong, intelligent female lead - which Tara was, but she also stomped over the line into hypocrisy a couple of times and that's a big turnoff for me. You don't get to be the one who tells the guy to get out after explaining why any sort of relationship won't work, then be disappointed when he leaves. You don't get to be the one who left and blame the guy for not chasing after you. That kind of stuff is just not cool for me. Snaps me out of the story like a slap upside the head every time.

She and Ford had great chemistry, though. Great chemistry. I liked Ford a lot, and he was satisfactorily burdened by his own commitment issues and too-laid-back lifestyle. That added depth to his character and kept him from being too perfect. And some of the most poignant, the most heart-clenching moments of the whole book were when he was interacting with Mia. For personal reasons, I'm a total sucker for those sorts of scenes.

I do wish there had been more time allotted to the sisters together. I would have given up a sex scene or two for that - there certainly were enough of them. There didn't seem to be as much of the sisters working together, being together, spending time with each other, as there was in the first book, and the absence, of Maddie in particular (though I sure don't begrudge her time with Jax), was keenly felt. I did, however, like the strengthening and evolving bonds between Tara and Chloe.

And about Chloe, who has fascinated me since her introduction... I'm dying to see Shalvis pit the Wild Child against the bulwark that is Sheriff Sawyer. There were several little gems of character evolution and burgeoning conflict between Chloe and Sawyer in this book and they offered some really great moments. I have great expectations for when they go toe-to-toe in their own book.

Though personally I slightly favor Simply Irresistible, I enjoyed the second chance romance of Tara and Ford in The Sweetest Thing. Shalvis remains a preferred author of mine, her books offering a wealth of entertainment. I've come to trust her for the sort of breezy, sexy, light contemporary romance - with a bit of bite - that I most prefer.

I liked the sisters a little more in this one. I think I understood them better. Ford was just so cute. Love this series and can't wait for the next!!

Hey, Mandi! :-)
I'm really looking forward to Chloe's story. The chemistry between her and Sawyer was great in this book, I thought. It'll be a long wait until November! Thanks for commenting!
Happy Reading,
Tracy

Return from The Sweetest Thing to Contemporary Romance

Return from The Sweetest Thing to One Good Book Home