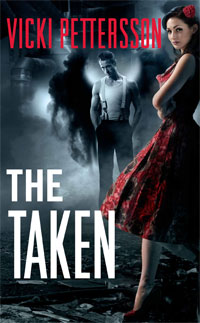 Disclosure:   An ARC of this book was provided to me through the Amazon Vine program. This rating, review, and all included thoughts and comments are my own.

A Centurion's gig should be simple. Someone dies a sudden and violent death, he shows up to escort the terminally confused into the Everlast. That's how it's supposed to go, anyway. Doesn't mean it always goes that way.

It's not that former PI and current angel Griffin Shaw doesn't sympathize with the hooker who got her throat sliced by her last john. She's dead. It sucks. He knows, because fifty years ago he was murdered, too. He deals with it. Mostly.

So okay, he's not the most sympathetic Centurion, and no, he doesn't believe his latest Take when she is adamant about not being a hooker. Fortunately, believing the dead isn't a requirement for the job. Still, he can't see forcing her to spend eternity in those working girl threads she's wearing, so he bends the rules just a little. Biggest mistake Grif's ever made.

That one moment of sentiment sets into action events that force him back to the mudflat, wings gone, slammed into a suit of meat. Skin. Breath. Life. Sounds great, except for an angel...now not-so-angelic...it hurts. And his punishment isn't over. His "good deed" such as it was, has consequences, and his punishment is to watch those consequences unfold, suffering through them all the while.

Now Grif, a gentleman from way, way back, is supposed to watch the most gorgeous woman he's ever seen get attacked by two men, be raped, then murdered. And stand by doing nothing. Because it's his fault Katherine "Kit" Craig is now fated to die.

Reporter and rockabilly enthusiast Kit is devastated by the murder of her best friend. They had been working together on a potential career-making story when Nic went undercover to get some corroboration on a tip. Now all Kit can do is follow through with that story, because besides ripping her heart out, there's one other thing that Nic's death does to Kit...it convinces her the story she and Nic were trying to verify has teeth. Nic wouldn't have been killed unless those teeth were extra pointy and sharp.

Problem is, only Grif knows that Kit is going to be next. And there's nothing he can do about it.

Gritty and decadently dark, the sheer artistry of Pettersson's new series debut totally rocked my socks. The concept alone is brilliant, and pairing a punished angel who was a PI in the fifties with a reporter who embraces the rockabilly lifestyle to the fullest is the hot fudge on one delicious hardboiled mystery sundae. Pettersson's gift for writing and her superlative grasp of all things Vegas spun the narrative of this tale like a well-oiled and glittery top, neon flashing over the soul-deep rust of human corruption, greed, and sexual deviance.

Grif and Kit were fantastic characters and perfect foils for one another. Kit is the idealistic reporter, passionate in her beliefs and clear in her grasp of black and white. A little naive at times, she cloaks herself in the detritus of a bygone era out of a combination of the yearning for simpler times and perhaps willing ignorance of the sad fact that there are no simpler times. Emotional and intelligent, she is forged by grief but untouched by the seedy violence around her.

Grif is like the shadow that Kit casts. He is all about the gray areas, full of a chilly cynicism that he calls having a solid grip on reality. Even fifty years as a Centurion, touched by the celestial as he was, didn't shake his world-weary view of human weakness. He's filled with angst over his death and the murder of his wife, but he's a man's man and stoic with it. He could have stepped out of a Sam Spade novel, or hung out with Phillip Marlowe and been right at home. He is definitely of a type, yet Pettersson avoids the pitfall of stereotype in lovely and unique ways.

The story, though obviously seeped in the paranormal, reads far more like a mystery than an urban fantasy. The supernatural elements become more like background noise as the story progresses, ancillary to the investigation that Kit and Grif are working on. There are times when it flares up throughout the story, and comes closer to the front towards the book's climax, but it's largely inconsequential to the bulk of the narrative.

That obviously wasn't a detraction for me, especially as I absolutely adored every moment of the leisurely-paced mystery plotline and tend to be picky about angel-themed fiction as a general rule. Fans of more traditional urban fantasy, as well as those who have little interest in this particular style of mystery, might have a less favorable view of the read. For me, it couldn't have possibly been any better.

The relationship between Grif and Kit was complex and added some delightful moments of levity to what really is a pretty horrific case. For all that they are picture-perfect together in appearance, Kit is a modern woman and Gif is a fifties man, and that sparked some great conflict between them. For all that conflict, though, there was also a nice give and take in their relationship that superseded the secrets Grif held, and absolutely enough sexual chemistry to light up the Vegas skyline.

Though there is a thread of romance through the book, this is not a romance novel, and the relationship between them evolved in a way that I felt heightened the intensity of the plot, especially towards the end. I also thoroughly enjoyed Kit's reaction when Grif comes clean, after, of course, Kit started putting pieces together and asked the tough questions. That changed the dynamic of their burgeoning partnership in some interesting ways.

Completely unique and utterly original, this book was a treat on every front for me. The Bad Guys were as bad as it gets, the crimes heinous, the mystery rich and meaty, and the characters vibrant and three dimensional. I can't wait to sink my teeth into the next book in this exciting new series and highly recommend it for fans of highly stylized noir fiction. Plainly spoken, it's art, and while art is always in the eye of the beholder, this particular beholder wants much more to see.

Return from The Taken to Urban Fantasy Genre

Return from The Taken to OGBDA Book Review Home