The Tears of Elios

An Ambitious and Expansive Debut 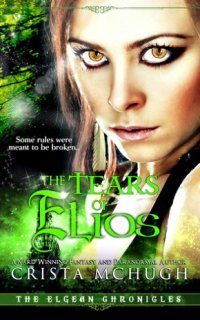 The Elgean kingdom is ruled by a tyrannical king intent on racial cleansing, but non-human races and their human sympathizers have formed a unique alliance, a gathered in a Resistance against the genocide. As Elgean forces are set to march against the Resistance, four people will rise up for the cause, going above and beyond to secure the freedom of all.

A shape-shifter named Ranealya breaks every one of her own rules for a human who showed her unusual kindness. That human, Gregor Meritis, lives a quiet, scholarly life in the woods, content with his studies until the wounded Ranealya drops into his life. Knowing her will change him forever.

As leader of the Resistance, High Elf Galen has more responsibility on his shoulders than many could imagine. It makes him wary and suspicious of strangers who could threaten the growing group of rebels he leads. When faced with the magician apprentice Kira, his reaction is dire and forbidding. She is a young human woman who stirs his suspicions and his desires and until he's sure of the one, he can't risk giving into the other.

Kira, overwhelmed by the Resistance stronghold after a sheltered city life, is tentative but captivated by the High Elf, but she's determined to give her aid. Even as she struggles to understand how Galen makes her feel.

The four of them will seek out the Tears of Elios in a desperate gambit that could kill them all. More than the hope of peace between the races is on the line. They fight for life, for the basic freedom from extinction. And they must not fail.

McHugh kicks off The Elgean Chronicles in this series debut, introducing her readers to an imaginative world with a solid story, one that appealed to me on a lot of levels. It's an ambitious endeavor, creating a world, defining it, inhabiting it, and stirring up conflict for the plot, then setting that conflict alongside two separate threads of romance. That's a lot to accomplish in one book, and there certainly were a plethora of diverse characters and a wealth of story being told in this one. It ended up, for me, being a bit too ambitious.

With so much going on and so many things and people being involved, the book really could have used another fifty to a hundred pages to get into the sort of depth of plot and character development necessary to be completely successful for me. What's there is nice, and McHugh has a talent for creating intriguing, unique characters. It's a double edged sword for me in this book, though, because I wanted to spend more time with them and I wanted to know them better than I was given a chance to do.

The shifting focus and different points of view between Ranealya and Gregor's thread and Kira and Galen's worked well in this book. It provided a wide, panoramic view of what is going on in Elgean from several different perspectives and kept me engaged in the threads as they progressed. McHugh was adept in shifting story focus seamlessly and fluidly, drawing the reader along with her as she weaves the characters lives together until all four intersect.

In truth, though, I found myself more personally invested in Ranealya and Gregor. No disrespect intended to the other two, but I thought everything from the shape-shifter mythos and Ranealya's individual backstory to Gregor's talents and familial connections were original, imaginative, and enjoyable, and I liked seeing them learn to trust each other as their relationship evolved. I spent most of the book yearning for more of them even as I enjoyed what was there.

But that sums up my largest issue with the book as a whole. For all that I liked what was there, there just wasn't enough to fully flesh out the world, the characters, and the story that was being told. McHugh has written a tale that kept me guessing and drew me along, she created and maintained characters who fascinated me and engendered sympathy, but it wasn't quite the layered, rich, and vibrant reading experience that it could have been had there just been more of it. I do hold out hope, though, that the continuation of the chronicles, now that the introduction is over, will be.

Return from The Tears of Elios to 2012 Reviews

Return from The Tears of Elios to OGBDA Book Review Home