A Campy and Chaotic Great Time 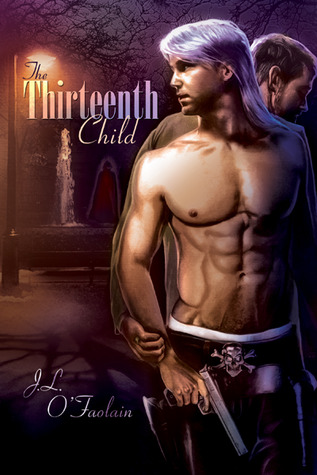 Disclosure:   A copy of this book was provided to me by publisher Dreamspinner Press. This rating, review, and all included thoughts and comments are my own.

Exiled from Faerie for almost a century, full-blooded sidhe Tuulois MacColewyn is working in New York City, minding his own business and taking the occasional enforcer job whenever his funds start getting low or he's feeling a bit of ennui. He is, in fact, just washing off the effects of a job when an old friend grabs Cole's attention...and Cole himself...right out of the shower, and yanks him through a portal straight into an active crime scene.

It's been a year since Cole last saw Detective James Corhagen. A year since the end of a friendship and loose working partnership that Corhagen decided was too intensely complicated to continue, and a relationship that the detective, intent on having a family, claimed he no longer wanted. Now Cole is standing, naked and wet, in a summoning circle Corhagen drew, at the command of a spell that the detective had cast.

Cole is just twisted enough to enjoy every moment of the turning worm, even as Corhagen informs him of the supernatural nature of the three homicides and kidnappings that prompted Corhagen's spellcasting. Cohagen has come to Cole...or summoned Cole to come to him...to ask the sidhe for the sort of help he once freely provided. With no clues and no way to stop a potentially supernatural killer with a taste for kidnapping infants, Corhagen desperately needs Cole's unique skills to have any hope of stopping these crimes before more babies are ripped from their parents' mutilated corpses.

Cole, being Cole, agrees to do what he can...for the right price...and if he just happens to get some personal pleasure out of the job, well, no self-respecting Fey wouldn't.

The Thirteenth Child isn't a perfect book. The plot is fast and packed with wild characters and wicked action, but the narrative is chaotic in places and some of the characters didn't get much definition. Character motivations and emotions didn't always translate well, which limited the emotional impact of some major scenes. The world-building and character backstory were unique and imaginative, but inconsistent, and at times seemed contradictory or lacking in clarity. The timeline, both for the past relationship between Corhagen and Cole as well as the current storyline, was hard to get a solid handle on and also seemed inconsistent in places. And Cole's abilities and powers seemed to fluctuate based on need and he came off as Mary Sue at times (I don't know the term for the male equivalent, sorry).

That being said, I sort of loved this book. It was delightfully campy in places, with Cold Hands of Death and pitchfork-imbued scarecrow constructs, power-hungry half-sidhe monsters with a Mommy fetish and teenage military-weapons hoarders, and Cole. I love Cole. He is an irreverent, insouciant rogue with a wicked sense of humor and nothing resembling shame. Despite any critical issues, I couldn't help being quickly drawn in and getting totally invested in his life and his story.

He really is the backbone of the book, but the supporting cast also included some spectacular secondary characters who I loved. Corhagen wasn't one of them. He was my least favorite of them all, in fact. His issues and his history with Cole were a point of contention between them throughout the story. It got a little old, especially as the rejection of his core needs and desires, as well as any lingering feelings he has for Cole annoyed me from start to finish.

Fortunately, there were a couple of other secondary characters who were real scene-stealers in their own right. I was particularly enamored with Robyn, who was the most kick-ass kid-sized weapons specialist and demolition...expert (she likes to make things go boom) I've ever had the pleasure to read. Inspector Vallimun, whose presence allowed me to deal with my dislike of Corhagen, also grew on me more and more as the story progressed. I ended up liking him far more than Corhagen.

The story has twists and turns that set up some truly great scenes of mass destruction. I love those scenes. There were also elements of mystery or at least secrecy shrouding Cole's past and those elements get woven into the present-day plot threads in pleasantly surprising ways. Not everything was explained as well as I would have liked, not all my questions got answered, but I got enough to keep me entertained.

M/M purists should be warned about one thing, though. Cole isn't exactly gay. I actually can't say that any of the characters I met in this book are. If labels are important, I'd broadly classify those who participate in the described sex scenes (which are all M/M or M/M/M) as bi-sexual. There are mentions of Cole having sex with, or thinking of having sex with, more than one woman in this book, though none of those sex scenes are described in any detail. That doesn't bother me, but I know some readers prefer their M/M stories to have no mention of hetero sex at all, so I wanted to mention it.

In Cole's case, he's sidhe, and in this world, the sidhe are a highly sexual race, just as likely to have healthy and frequent sexual relationships for everything from offering comfort to expressing friendship to procreating with mates, and they are just as likely to be with males as females, Fey or human, or any combination and number of one or all of the above. Personally, I liked the racial distinction and thought it helped define aspects of Cole's nature.

So The Thirteenth Child isn't perfect, but perfection is highly overrated. What it is, is a rousing good time with memorable characters and an imaginative story. It's a little wacky, a little corny, hella sexy at times, and not always completely clear. It's tongue-in-cheek and wryly sardonic. It's Cole, who can do everything from shape shift to freeze with a touch; who will work if you pay him but fight to the death if he cares. Who will taunt you and tease you and force you to see the hardest truths. Who you want on your side, and who you want to see again and again. I know I do.

Return from The Thirteenth Child to LGBT-M/M

Return from The Thirteenth Child to One Good Book Home