The Trouble With Paradise

Some Trouble With Trouble 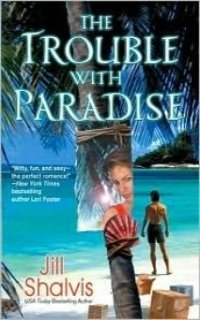 Stuck in a dead-end job she hates, Dorie Anderson was thrilled to win an all-expense paid South Pacific cruise. This may be her one shot at the sort of adventure retail clerks at Shop-Mart only dream about. She starts to feel like she's getting a bit more than she bargained for when she first sees the plank leading up to the exquisite 80 ft sailboat, and has a bit of difficulty actually crossing it to get on board. The appearance of totally gorgeous and really quite sweet baseball player Andy Hutchinson probably would have helped...if Dorie's tongue didn't swell beyond the point of speech every time she looks at someone that good looking and nice.

So far her dream vacation is little more than a comedy of clumsiness and she hasn't even made it onto the ship yet!

Finally taking her fear of heights firmly in hand...once waving off help from the drool-worthy Andy...she manages to make it part of the way across the plank when a polite, if chilly...and very French voice from behind her does nothing to try to help and instead, insists on getting around her...as she dangles over the water way below...on a tiny little plank with little bitty chains keeping her from plunging into the ocean. Yeah. And if that's not bad enough, tall, dark, broody...and very French guy is gorgeous in a dangerous sort of way. But he surely doesn't make her tongue swell. There's nothing nice about him.

Getting on board proves to be more than half the battle, but it costs Dorie a sprained ankle and a couple of splinters in unmentionable places. A quick trip to the ship's doctor, however, puts her face to face with one darkly brooding but gorgeous...and very French Dr. Christian Montague. Who's so not nice.

He may not be nice, but Christian's got his own problems. He doesn't want to be on board and can't wait until he can get back to France and be a real doctor instead of little more than eye candy for all the bored rich women who want a piece of him. That tends to make him cranky, as he never mixes business with pleasure. Ever. Well...mostly ever, as there's something about Dorie's guileless eyes and winsome smile that he can't seem to get out of his head. But that feeling he gets when he sees the obviously interested Andy try to make a move on her isn't jealousy. No. It's...it's indigestion...or something.

Once they've set sail, though, the cruise takes a turn towards bad when the storm the captain thought he could weather turns out to be a hurricane. Blown far off course and now on a sinking ship, Dorie's not enjoying her vacation nearly as much as she thought she would, and the fact that she thinks she saw one of the crew thrown overboard in the middle of the storm doesn't help. No amount of attraction to Dr. Grumpy Gorgeous is going to be able to make her feel better about that, especially after they find themselves and the rest of the crew and passengers stranded on what seems to be a deserted island. And one of them is a killer.

The Trouble With Paradise starts out strong, with a quirky heroine and a smoldering...and very French...hero. I enjoyed Dorie's personality and was pleased by the humor and quick witted dialogue between her and Christian. The characters lacked some depth, but they were pleasant enough, and the plot seemed set to sail with a light, fun, fluffy romance. Then the storm hit and from that point on, this book didn't totally work for me.

As the hurricane was lashing the sailboat for what seemed like days on end, the plot sputtered and the pacing dragged, and instead of feeling life threatening and dangerous, that thread seemed to take far too long to evolve and lacked any sort of emotional impact. The additional plot twist of the missing crewman and potential murder seemed almost an afterthought and was given less attention than the attempts to garner chemistry and heat between Christian and Dorie. And I just never felt that there relationship had that much chemistry to begin with, unfortunately. I liked both of them well enough, but for some reason they didn't quite click for me.

Secondary and ancillary characters were very two-dimensional and not given enough development to fully escape cliche. Andy was perhaps the most well rounded of them all, but even he was little more than a foil for the budding romance between the two leads. Two female passengers, the vampy Vegas dancer Brandy, and the hyperactive Cadence, were both a bit more like stereotypes than real people, and didn't offer much to the story or to draw out more depth in Dorie's personality.

From the point that the storm finally breaks and the boat makes a shaky landing on the deserted island, the plot takes another plodding turn. The unavoidable suspicion everyone has for everyone else when the crime is discovered felt labored and forced. The potential gold mine of development as the crew and passengers realize their stranded and have to survive by wit and wile goes largely unexplored. By the time rescue came, and events started to crystallize, the crime didn't really seem to faze anyone and the answers didn't make all that much sense.

In the end, I was left feeling that everything was just a little off in the book, and while the lead characters were okay, and the overall plot arc was all right, there were a ton of missed opportunities and not a lot of depth to any of it. Still, Shalvis is a talented author and she excels at witty dialogue and quirky characters, so while I did have problems with the book, I didn't dislike it. It just didn't have much of an impact. For a stronger read by Shalvis with characters that have a lot of genuine chemistry and depth and a plot that had a few more layers, I'd recommend Simply Irresistible. Quirky, funny, and poignant, that one worked for me in ways this one didn't.

Return from The Trouble With Paradise to Contemporary Romance

Return from The Trouble With Paradise to One Good Book Home