Even the Undead Have Issues! 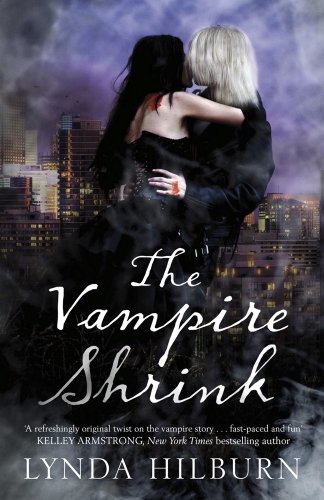 Kismet Knight, Ph.D., is a relatively successful psychologist leading a relatively average life in Denver. Her practice is strong, even if her love life's been more drought than flood for the past two years. She's a modern woman, self aware and logical, and while she may not be the most open minded of people, she definitely has a sense of personal humor that - when combined with her clinical mind - serve her well in her profession. When a teen-aged client comes into her office, forced into therapy by the classic misunderstanding parents, and starts spouting off about vampires and the desire to be undead and going all starry-eyed at the mention of the vampire master she met, Devereux, Kismet starts seeing a potential new avenue for therapy that could lead to a book deal in her publish-or-perish profession - NOT fanged, blood drinking fiends from beyond the grave. Soon there are disappearances and odd encounters with perversely sexy men (one of which is the aforementioned Devereux) waking up in a coffin surrounded by corpses, and a trail of death between New York and Denver that brings a sexy FBI Special Agent into her sphere and threatens Kismet's continued existence. No matter how firmly she clings to her logic and lack of belief in fanged creatures that go bump in the night, Kismet is thrust into the vampire underworld and realizes, albeit belatedly, that the undead have issues too - and they're so much more deadly than human's.

The Vampire Shrink is a great read. I really enjoyed the story and I will be forever grateful to Lynda Hilburn for writing a psychologist character that actually sounds and acts like a psychologist. I recently completed a trilogy by a different author that didn't manage that feat and that very lack was one of my criticisms of the entire trilogy. Instead, The Vampire Shrink didn't disappoint me in that regard, and in fact, one of the major plot threads of this book was the pleasantly realistic portrayal of a psychologist - an educated and learned individual, secure in her understanding of the human mind and all its vagaries - that was being forced into situation after situation that demanded acknowledgment that the world was a lot more complicated than she'd previously thought. And it was very well done, if a bit frustrating at times. I certainly felt the plot moved along quickly and the conflicts were many and varied, so it was a very satisfying read from that perspective. I also found this book to be unique for the very reason that the main plot seemed to be Kismet's introduction to and emergence into the vampire world, as the other plot threads and conflicts seemed to revolve around that central theme instead of visa verse. There was quite a lot going on in The Vampire Shrink, including murders, protection rituals, and sexy men and vamps with lots of appeal, but as the book is told quite convincingly by Kismet in first person POV, it is understandable that her development was the primary focus of the book and the rest of the happenings supported that development.

There were a few aspects of the book that prevented me from totally loving it, though. I have to admit, I wasn't used to a book in which the protagonist steadfastly refused to believe in the existence of anything supernatural for almost the entire first half (46% for you Kindle readers). That was a little disconcerting, actually, and I found Kismet's tenacity to be a bit trying. I tried to weigh that against the knowledge that she IS a psychologist who deals with patients who have varying degrees of issues and some of those degrees include psychopathy and delusion, so it did make sort of a macabre sense that she'd be so stubbornly resistant to just leap onto the belief train, but towards the end, when the evidence of the truth REALLY started stacking up, I think even the most rational person would have to cave before Kismet did, so that was a bit of a problem for me.

I also don't believe that Kismet's unusual fascination with the opposite sex - a fascination that bordered on nearly obsession when EVERY male she met was measured as a potential lover - was satisfactorily explained. I think I caught the explanation - that Bryce had mind-mojo'd her and changed her brain waves - and that they fell more into line with the sexuality of the vampire race, but I don't think it was very well delineated and would have preferred it have been given a bit more attention for my own tastes. And speaking of Bryce...the big conflict at the end of the book was a bit abrupt - both in its inception and its conclusion, and there were some things thrown into it that left me scratching my head a little. Again, that's a danger in a book where the goings on around the POV character haven't directly included that character in those goings on...if that makes sense. To be more specific (while trying desperately not to include spoilers), the vampire war and struggle for power doesn't really impact or include Kismet directly during the book, but she's pulled into it at the end because of her connection with Devereux. As a result, the conflict at the end, which was all about that struggle for power, sort of forced Kismet into the center of it without any real story build up about why she was a part of it all. And not to complain, but when did Kismet start seeing things in mirrors? That made no sense to me at all. The whole of that final conflict seemed a bit odd to me as a result. The only other issue I had that's worth mentioning was the lack of sufficient explanation or follow up with the psychic Kismet met early on. I would have enjoyed more than a cursory mention later, but as it was written, that felt more like an unresolved plot point. It could be resolved or addressed in a later book, we'll see.

It sounds like I didn't like the book as much as I did, and I don't want to leave anyone with that impression, because as a whole, The Vampire Shrink had a lot of good points and I found it to be a compelling and interesting read. I will definitely be continuing the series.

Return from The Vampire Shrink to Urban Fantasy Genre

Return from The Vampire Shrink to OGBDA Book Review Home