A Dark and Edgy Regency Paranormal 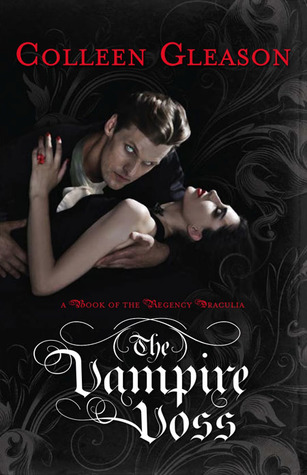 Disclosure: This book was provided to me through the Amazon.com Vine program for the purpose of an honest review. The rating, review, and all included thoughts and comments are my own.

One hundred and forty-eight years ago, Lucifer slid into the dreams of a young nobleman named Voss, now Viscount Dewhurst, and put forth an offer Voss had no interest in refusing. In so doing, he, like other descendants of Vlad Tempest, accepted Lucifer's Mark and stepped from a life of pampered privilege into a life of blood, desire, and unending salacious indulgence. Barring a grievous beheading or a splinter in the heart, Voss was immortal, and never being one to live within boundaries when he was human, the additional freedoms of being a vampire suited him just fine.

He is a self-involved, insouciant narcissist who revels in his debauchery and devises grand plans to uncover the weaknesses of every other of his kind. Disregarding the chasm that exists in the Draculia, he plays his mind games with both the contingent who choose to live among humans without killing and those who see humans as nothing but food, killing indiscriminately as they satisfy their hungers for blood and sex. Independent of both, beholden to no one but himself...and perhaps Lucifer...he dances between the two, giving neither side his fealty. He personally doesn't kill his food...but it's not out of any sort of loyalty. He's just too busy sexing them up to bother.

Having just returned from an unholy sabbatical in the rustic colonies, he's reveling in his return to civility and to the opportunity to machinate some more intrigue. As tensions between the English and French rise and Bonaparte continues to pose a greater and greater threat, Voss is on the hunt for the sort of information that is his stock in trade. The trail of rumor and innuendo leads him to a young socialite named Angelica Woodmore. She's the sister of a famous vampire hunter, but her value to Voss is as a Seer, one reputed to be able to ascertain when and how a person dies, and he intends to make use of her skill.

He hadn't intended to be so affected by the incomparable woman. She stirs things in him he'd never, in all his long existence, felt before, and it leaves him confused and shaken, and so very hungry for her. Angelica sees death, lives with that macabre knowledge daily, and doesn't let it ruin her. Voss is terrified of death, for all his immortality, and hides that deep secret behind decades of licentious depravity. The two of them have a burning need for each other, but the divide between them is wide and the danger high. And a young human in Voss' world tends to end up exactly one way...one way or another.

Colleen Gleason kicks off The Regency Draculia trilogy with a fine eye for historic detail and a fresh take on vampire mythos that is both dark and seductive. Set in Regency England among the social and restrictive ton, vampires seem a surprisingly good fit, and Gleason weaves their backstory into a rich and plausible yarn. Adding legitimacy to the story and the era in which it is based, there's an enticing bit of politico about Napoleon's conflict with England shortly following his rise to emperor in 1804 that winds through the plotline surrounding the antagonist of the story, a hideous Dracule with delusions of grandeur and a penchant for the blood of children.

Characters in the book are well written and fully realized, including secondary and ancillary characters, and I especially appreciated the way in which Angelica's character was created and evolved through the book. It's very rare that I feel a female lead in a historical novel is both realistic for the era she's being written and likable to me, as women's true roles and freedoms at familiar points in the past were very limited. Gleason maintained an air of respect for the propriety that was lived and breathed in Regency England, yet gave her ingénue enough inner strength to balance out her lack of worldliness. I found Angelica's youthful enthusiasm refreshing instead of cloying and her naivety understandable instead of annoying. And she was a much-needed source of light to balance out the darkness of Voss.

It's also rare that I have a greater fondness for a female romantic lead than the male, but liking Voss was no easy feat. I thought he was tremendously original as a character, and I admired how he was developed and written. He was definitely three dimensional and very real. He just wasn't a nice guy. Had this been a different book, I would have considered him a brilliant creation. The shades of gray he lived and breathed were intriguing, the personality behind the vampire was forceful, and the narcissism and disregard for others were in tune with his character's history as well as being fascinating to watch while he was manipulating things and the people around him. The ramifications and effects of his Mark were also unique and provided great insight into his character.

As a male romantic lead in a romance novel, however, he fell far short. And that's where the book stumbled for me, because without a believable male romantic lead, the entire romantic arc failed. I loved the initial attraction between Voss and Angelica, I even loved how confused he got by the odd impulses she made him feel, and his annoyance at her referring to him as Dewhurst instead of by his given name was priceless. As for the rest of the book, I loved how the plot was woven, how the bare bones of the trilogy arc were laid out, how vampires were explained, how secondary characters were included. True, I wasn't fond of one scene with Angelica's brother and Narcise, as it seemed an abrupt and out-of-place inclusion at the time, but I loved the constant battles between Angelica's sister and Dimitri, and I enjoyed getting a glimpse of the past in which the relationship between Dimitri and Voss fell apart.

Those aspects of the book and all the myriad of others were completely satisfying. All except the romance. I don't find it at all romantic when the male lead is debauching his way through the human population for most of the book, gleefully soaking in blood and sex at every opportunity, even if it's a result of the hunger Angelica stirs, while his maneuverings seem to stay solely focused on the information he wants from her, not being with her. Redemption for Voss...and the romance...came too late for my tastes in this case. It wasn't even until the last chapter that I was saw proof that Voss had more than lustful feelings for Angelica. In the meantime, he was entirely too comfortable sopping up the perks of his species to work for me as the romantic lead.

When the romance doesn't work for me in a book that is supposed to feature it as the main purpose (even if it's not the only purpose), than it's hard to truly embrace the book and the characters, no matter how much you love the rest of it.

Still, my discontent with the romance isn't enough to make me dislike the book, and I have to give credit for Gleason for one more thing. At the end of this book is a plot twist and outcome that is rarely seen in vampire fiction. I've only seen it twice before, in fact, which is saying something considering how very many books I've read that feature the fanged masses. It's not a twist I particularly like in theory, and in both of those previous instances, I actively disliked when it happened and felt it seriously impacted my enjoyment of the books and series in which they occurred. Not so here. In fact, not only did I really enjoy it in this case, but I think it was a perfect fit to the story and the characters, and I absolutely loved how it developed and was revealed. I don't actually think it could have been handled any better in any aspect and it was a true treat to read.

I almost wish that the book wasn't intended as a romance, and instead it had stuck to the blend of paranormal and historical intrigue. It would have been extremely successful for me in that case. As it stands, it falters a little on its main goal but still provides a wealth of complex reading and a lot of enjoyment. With The Vampire Dimitri set as the second book in the trilogy, I sincerely hope that the romantic thread is better developed, because I was really intrigued by Dimitri in this book and am anxious to get a closer look at him, his motivations, and his inner demons. Both metaphorically and otherwise.

Return to top of The Vampire Voss