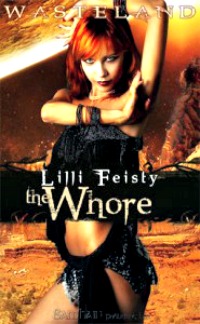 The premise for the Wasteland series is fantastic. Four novellas written about the four different caste systems of women in the post-apocalyptic world of earth years after a solar flare in 2012 destroyed civilization as we know it. Lilli Feisty has given us the second book in the series, The Whore, a story about a young woman named Bryn. Wearing the tattoo of a rose on her earlobe that marks her as a prostitute, Bryn is constrained by the limitations of her female gender and after a lifetime of prostitution, has no love for males of her species. She's an independent soul who yearns for freedom from the brothel that serves as both her protection and her prison. Often she slips into the clothes of her patrons and sneaks out into the male-dominated city for glimpses of life free of the restraints she's bound by.

One such night she stumbles onto a pack of boys that are interested in the earbob hiding her tattoo. Bryn tries to fight them off, knowing if they find out she's a Rose (that's what whore's are called) she'll be horribly punished and lose even the smallest freedom. She's rescued by a pair of men who look like pirates and who step in and take care of the youth before letting her go on her way. Bryn is so overwhelmed by their help and camaraderie...and obvious affection for one another...that she's compelled to follow them back to the docks. Before she knows it, she's committed herself to work on the pirate ship captained by Xander, doing work that she's never had to do before even as she tries to hide her femininity from the men on the ship. Xander and his first mate and lover Hawke, however, aren't fooled by her disguise, and soon they've drawn her into a sexual situation that captivates and titillates Bryn, and despite her dislike of sex with males, she finds herself aroused to nearly unholy levels at the idea and participation of sex with Xander and Hawke. Her freedom at hand, Bryn surrenders to need, want, and love as Xander and Hawke remind her what it's like to be a woman.

I enjoyed the sexuality of this novella, and thought the menage relationship was well written and quite hot, but for me, the narrative surrounding it was a little light on plot and while I felt Bryn was very well defined as a character, I never fully got a clear picture of Xander or of Hawke as well defined characters beyond their sexuality. There was an scene with Xander at the beginning of the story that setup some interesting conflict, but ultimately it went nowhere. I also had some problem considering this story a romance. Where the previous book in the series, Crystal Jordan's The Wanderer provided an emotionally satisfying relationship paired with the erotic aspects of the story and the definition of the world, I felt that was sorely lacking here and it prevented me from fully enjoying the whole of the story and engaging with the characters.

Points again, however, for amazing cover art. It's truly beautiful.

Return from The Whore to Genres

Return from The Whore to OGBDA Book Review Home